By SHERYL UPCHURCHFebruary 5, 2022MARY SUE DAVIS – ARTICLES
LESSON 8
THE GOSPEL ACCORDING TO MATTHEW
CHPTRS. 25-28
Chptr. 27 Cont.’: and Matt. 28
Explanations of Matt. 27: 50-66
Review: Did God forsake Jesus?
In scripture we find quite a few verses in the Old Testament that seem to indicate that while God promised not to forsake Israel Deut. 4:31 he then goes back on his word and does forsake them. But does he actually forsake them or does their sin have consequences; are they are reaping what they have sown? WE ANSWERED THIS IN THE LAST LESSON. Here are some of those verses for you to check out – Deut. 31:16-18; 1Ki 6:11-13; Neh. 9: all esp.30 ,31; Is. 59:2; Is. 54:8.
Let’s look at how God dealt with Jesus because that has a huge significance for us and our lives. Throughout his lifetime Jesus made some interesting claims.
John 10:30, I and my Father are one. That reality was never rescinded before, during or after the cross.
In John 14:9 -11 Jesus says four times that he and the Father are in each other. v9 He that has seen me has seen the Father. 10 “Do you not believe that I am in the Father, and the Father is in Me? The words that I say to you I do not speak on My own initiative, but the Father abiding in Me does His works. 11 “Believe Me that I am in the Father and the Father is in Me. In speaking of his coming death, Jesus believed the Father would not leave him to face it alone.
John 8:28,29 Then said Jesus unto them, When ye have lifted up the Son of man, then shall ye know that I am he, and that I do nothing of myself…. 29 And he that sent me is with me: the Father hath not left me alone.John 16:32, Behold, the hour cometh, yea, is now come, that ye shall be scattered, every man to his own, and shall leave me alone: and yet I am not alone, because the Father is with me.Then we come to those famous words on the cross… My God, my God why hast thou forsaken me (Matt 27:46)
Did God really turn his back on Jesus and forsake him or was something quite different from what the words seem to imply actually happening. I believe that something different was happening. Scripture confirms it: I will never leave you or forsake you. Deut. 31:6, Heb. 13:5. Absolutely not.
d. This man is calling for Elijah: Sadly, Jesus was misunderstood and mocked until the bitter end. These observers thought it was all an interesting test case to see if Elijah would actually come.
1). As Jesus hung on the cross, His listeners misunderstood Him by taking the part for the whole. He said, Eli, Eli, lama sabachthani? Not only did they get wrong what they heard (Jesus said, “Eloi” not Elijah), but they also only heard one word of what He said. This will not do for the true follower of Jesus; we hear not only one word from Jesus, but every word that proceeds from the mouth of God.
And Jesus cried out again with a loud voice and yielded up His spirit.
e. Jesus cried out again with a loud voice: Most victims of crucifixion spent their last hours in complete exhaustion or unconsciousness before death. Jesus was not like this; though tremendously tortured and weakened, He was conscious and able to speak right up to the moment of His death.
1). The Fathers found in the loud cry a proof that Jesus died voluntarily, not from physical exhaustion. Some modern commentators, on the contrary, regard the cry as the utterance as one dying of a ruptured heart.
2). John 19:30 tells us that Jesus said, It is finished, which is one word in the ancient Greek – tetelestai, which means, paid in full. This was the cry of a winner, because Jesus fully paid the debt of sin we owe and finished the eternal purpose of the cross. EVERYTHING!! Note in the book of Revelation the Word says, It is done! Rev. 21:5.
A Brief Scriptural Synopsis of the Finished Work of Christ: 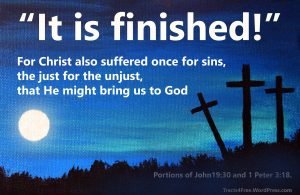 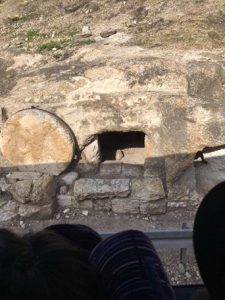 2. (62-66) The tomb is sealed and guarded.
a. Sir: They gave Pilate a title of honor and respect. But the day before these same religious leaders rejected the King of Kings. They mocked and despised Him, putting Jesus to open shame, but they honored Pilate.
b. We remember…how that deceiver said, After three days I will rise: Ironically, the enemies of Jesus remembered His promise of resurrection better than His own disciples remembered.
c. While He was still alive: In this, the enemies of Jesus admit that Jesus is dead. They did not believe the Swoon Theory, a conjecture that denies the resurrection, saying that Jesus never really died, but just swooned on the cross, and then somehow wonderfully revived in the tomb. Not truth.
d. Lest His disciples come by night and steal Him away: They couldn’t have been afraid of the disciples. They knew they were terrified and in hiding. They knew they were gone from the crucifixion scene. Their intelligence sources and informants let them know the disciples were terrified. Instead, they were afraid of the power of Jesus.
f. Sealing the stone and setting the guard: This describes the measures taken to secure the tomb of Jesus.
· Material obstacles don’t stand before the resurrected Jesus.
· Human authority doesn’t stand before the resurrected Jesus.
· Human strength doesn’t stand before the resurrected Jesus.
CHAPTER 28
Matthew 28:1-20
Matt. 28:1-17 Now after the Sabbath, as the first day of the week began to dawn, Mary Magdalene and the other Mary came to see the tomb.2 And behold, there was a great earthquake; for an angel of the Lord descended from heaven, and came and rolled back the stone from the door, and sat on it.3 His countenance was like lightning, and his clothing as white as snow.4 And the guards shook for fear of him, and became like dead men.5 But the angel answered and said to the women, “Do not be afraid, for I know that you seek Jesus who was crucified.6 “He is not here; for He is risen, as He said. Come, see the place where the Lord lay.7 “And go quickly and tell His disciples that He is risen from the dead, and indeed He is going before you into Galilee; there you will see Him. Behold, I have told you.”8 So they went out quickly from the tomb with fear and great joy and ran to bring His disciples word.9 And as they went to tell His disciples, behold, Jesus met them, saying, “Rejoice!” So, they came and held Him by the feet and worshiped Him.10 Then Jesus said to them, “Do not be afraid. Go and tell My brethren to go to Galilee, and there they will see Me.”11 Now while they were going, behold, some of the guard came into the city and reported to the chief priests all the things that had happened.12 When they had assembled with the elders and consulted together, they gave a large sum of money to the soldiers,13 saying, “Tell them, ‘His disciples came at night and stole Him away while we slept.’14 “And if this comes to the governor’s ears, we will appease him and make you secure.”15 So they took the money and did as they were instructed; and this saying is commonly reported among the Jews until this day.16 Then the eleven disciples went away into Galilee, to the mountain which Jesus had appointed for them.17 When they saw Him, they worshiped Him; but some doubted.
28:1-17 AH SHUA RESURRECTED And in the evening of the Shabbath until the dawning of the First Shabbath, Maryam the Magdelaita and the other Maryam see the tomb: and behold, a great quaking: for the angel of Yah Veh descends from the heavens and approaches and rolls the stone from the portal and sitting upon it and his semblance having been as lightning and his clothing being white as snow: and the guards are quaking in fear of him, and become as dead. And the angel answers the women, wording, You — frighten not: for I know you seek Yah Shua the staked: he is not here: for he has risen as he worded: come, see the place where our Lord had been lying: and go quickly and word to his disciples that he has risen from the house of the dead: and behold, he precedes you into Gelila— there you see him: behold, I have worded to you. And they go quickly from the tomb with fear and great cheer: and race to word to his disciples. And behold, as they go to word to his disciples, Yah Shua meets them there, wording, Shalom to you! — and they approach, hold him by the feet, and worship him. Then Yah Shua words to them, Awe not: go word to my brothers to go to Gelila and see me there.
WARRIORS BRIBED TO DENY THE RESURRECTION And when they go, behold, some of the humans of the custodians come to the city, and word to the Rabbi Priests all that became: and they assemble with the elders and take counsel: they give not a little silver to the custodians, and wording to them, Word that His disciples came and thieved him by night, when we were sleeping: and if this is heard in front of the governor, we convince — we to him, and we work that you not be anxious. And when they take the silver they work as they are doctrinated: and this word goes among the Yah Hudaya until this day. And the eleven disciples go to Gelila— to the mountain where Yah Shua appointed them — and when they see him, they worship him— and some are doubting. Aramaic NC
We will continue with Les.8 next week.
The blessings of the Lord are upon you whether by blood, adoption/sonship or assignment. The blessing of the LORD makes a person rich, and he adds no sorrow with it. Prov. 10:22
David & Mary Sue