Our Inheritance in Christ Cont.’

Eph. 3:3 how that by revelation He made known to me the mystery (as I have briefly written already)

3:3 You must have heard how this mystery was revealed to me, in a dramatic disclosure that broke the silence of a long- kept secret. I have previously only written very briefly about this. Mirror Translation

Eph. 3:4 by which, when you read, you may understand my knowledge in the mystery of Christ),

3:4 In reading these words you will co-know the mystery of Christ together with me. It is inevitable, just like two rivers flowing together. Mirror Translation

Eph. 3:5 which in other ages was not made known to the sons of men, as it has now been revealed by the Spirit to His holy apostles and prophets:6 that the Gentiles should be fellow heirs, of the same body, and partakers of His promise in Christ through the gospel,

3:5 In no previous generation has there been a more comprehensive and detailed understanding (of the full consequence of grace) as it has now been uncovered in the Spirit to His consecrated ambassadors and prophets, addressing the whole human race. (The sons of men.) Mirror Translation

3:6 The essence of what I see reveals the fact that the multitude of humanity are joint participants in the same inheritance (together with Israel), we are all part of one and the same body, in Christ. The Good news is that God’s promise is equally relevant and applicable to all. Mirror Translation 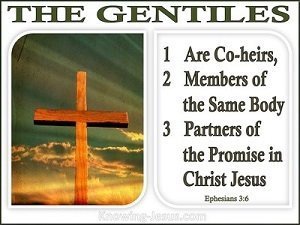 Related Scripture: 1 Cor. 2:7 To them God willed to make known what are the riches of the glory of this mystery among the Gentiles: [a]which is Christ in you, the hope of glory.

MYSTERY — the hidden, eternal plan of God that is being revealed to God’s people in accordance with His plan.

In the New Testament, “mystery” refers to a secret that is revealed by God to His servants through His Spirit. As such, it is an “open secret.” “Mystery” occurs three times in the Gospels. Jesus told His disciples, “To you it has been given to know the mystery of the kingdom of God” (Matt. 13:11; Mark 4:11; Luke 8:10). Jesus explained the mystery of God’s kingdom to His disciples. But to others He declared, “All things come in parables” (Mark 4:11).

Most of the occurrences of the word mystery are in the Pauline Epistles. “Mystery” refers to the revelation of God’s plan of salvation as that plan focuses in Christ. The gospel itself is a “mystery which was kept secret since the world began” (Rom. 16:25). This mystery was revealed by God through the prophetic Scriptures to Paul and the church (1 Cor. 2:7; Eph. 6:19; Col. 4:3).

“Mystery” also refers to the future resurrection of Christians (1 Cor. 15:51), the summing up of all things in Christ (Eph. 1:9), the inclusion of Gentiles in the church (Eph. 3:3–9), the future salvation of Israel (Rom. 11:25), the phenomenon of lawlessness (2 Thess. 2:7), and the godliness of Christ (1 Tim. 3:16). John the Revelator also disclosed the mystery as the Revelation of Jesus Christ in us and through us.

The mystery in Col. 1:27 refers Christ in you. This was only revealed to Paul. 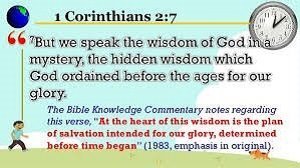 Mystery of the Gospel of Grace

Whenever we study God’s Word, we must take care not to anticipate revelation. That means that when we read a passage, we must not assume that future revelations from God were known at the time the events in the passage or the writing of the passage took place. We must realize that from the time God first spoke to Adam, until the last book of the Bible was written, God revealed His Word to men over a period of about four thousand years. He did not give it to man all at once. For example, as Adam stood there in the garden of Eden, he could not have known anything about the ten commandments which would be given by God to Moses about 2600 years later. Nor could Jacob have told you about the sermon on the mount that Jesus Christ would preach some 1700 years later. When we read a passage of scripture, we must understand and keep in mind what God had revealed to the people being addressed up until that time. The things which were not yet known are still secrets that are hid in God, mysteries which He has yet to reveal to anyone.

Deuteronomy 29:29 says, “The secret things belong unto the Lord our God: but those things which are revealed belong unto us and to our children for ever ….”

With this in mind, let us look at some examples related to our topic, examples which show that the mysteries, the “secret things”, of God are not known by man until God reveals them.

Sometimes God will even go so far as to say the words, but still not allow them to be understood. When God was allowing Israel with captivity by the Assyrians, he called forth the prophet Isaiah and told him,

An examination of Matthew 16:21-22, Luke 18:33-34, and John 20:9 shows that during Christ’s earthly ministry, the twelve apostles did not know that Jesus Christ was going to die and rise again from the dead. Even though Christ had told them this plainly on several occasions, it was hidden from them by God. Remember, Peter rebuked Him for saying this.

To us Christ has revealed the Scriptures to us by the Spirit of Christ, Spirit of Truth, Holy Spirit. 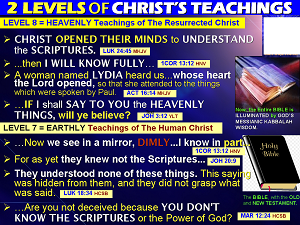 Paul received the gospel of grace by direct revelation from the Lord Jesus Christ. He was appointed as the apostle of the Gentiles to reveal mysteries previously kept hidden.

Keep in mind that Ephesians was written around 62 AD, about 30 years after Jesus Christ had ascended into heaven. Paul had already completed his first three missionary journeys.

Ephesians chapter 3, beginning with verses 1-4. “For this cause I Paul, the prisoner of Jesus Christ for you Gentiles, If ye have heard of the dispensation of the grace of God which is given me to you-ward: How that by revelation he made known unto me the mystery: (as I wrote afore in few words Whereby, when ye read, ye may understand my knowledge in the mystery of Christ)

So, we see that God by “revelation” showed Paul the “mystery” which no one knew before. This is why Paul calls it “my knowledge”. “Which in other ages was not made known unto the sons of men, as it is now revealed unto his holy apostles and the prophets by the Spirit …” (Ephesians 3:5). Note the change in tense here. Compare “is now revealed” around 62 AD to the apostles with “he made known unto me”, Paul by revelation at some earlier time. Then in Ephesians 3:9, “And to make all men see what is the fellowship of the mystery, which from the beginning of the world hath been hid in God, who created all things by Jesus Christ ….”

In about 66 AD, Peter, near his death, acknowledged that God had revealed many mysteries to Paul.

He writes in 2 Peter 3:15-16, “And account that the longsuffering of our Lord is salvation even as our beloved brother Paul also according to the wisdom given unto him (not “unto us”, but “unto him”) has written unto you; As also in all his epistles, speaking in them of these things hard to be understood ….” Peter was writing this epistle to Jews, so the epistle of Paul that Peter was referring to was Hebrews.

From Romans 16:25, it is evident that the what Paul calls “my gospel”, was a mystery until God showed it to him by revelation. “Now to him that is of power to establish you according to my gospel, and the preaching of Jesus Christ, according to the revelation of the mystery, which was kept secret since the world began ….”

Why did God keep our gospel a secret for so long?

“But we speak the wisdom of God in a mystery, even the hidden wisdom, which God ordained before the world unto our glory: Which none of the princes of this world knew: for had they known it, they would not have crucified the Lord of glory” (1 Corinthians 2:7-8).

So, no one was allowed to know it, not Peter, the apostles, Judas, Pilate, the demons, or even satan himself. No one but Paul was given the “mystery.”

The very good news is that “Holy Spirit leads us into all truth.” 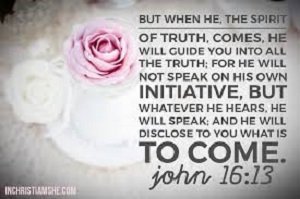 John 16:13 However, when He, the Spirit of truth, has come, He will guide you into all truth; for He will not speak on His own authority, but whatever He hears He will speak; and He will tell you things to come.

We will continue with Lesson 4 next week.