The Gospel of Matthew – Lesson 4 (Continued)

Matt.11:1-24 Now it came to pass, when Jesus finished commanding His twelve disciples, that He departed from there to teach and to preach in their cities.2 And when John had heard in prison about the works of Christ, he sent two of his disciples3 and said to Him, “Are You the Coming One, or do we look for another?”4 Jesus answered and said to them, “Go and tell John the things which you hear and see:5 “The blind see and the lame walk; the lepers are cleansed and the deaf hear; the dead are raised up and the poor have the gospel preached to them.6 “And blessed is he who is not offended because of Me.”7 As they departed, Jesus began to say to the multitudes concerning John: “What did you go out into the wilderness to see? A reed shaken by the wind?8 “But what did you go out to see? A man clothed in soft garments? Indeed, those who wear soft clothing are in kings’ houses.9 “But what did you go out to see? A prophet? Yes, I say to you, and more than a prophet.10 “For this is he of whom it is written: 1 ‘Behold, I send My messenger before Your face, Who will prepare Your way before You.’11 “Assuredly, I say to you, among those born of women there has not risen one greater than John the Baptist; but he who is least in the kingdom of heaven is greater than he.12 “And from the days of John the Baptist until now the kingdom of heaven suffers violence, and the violent take it by force.13 “For all the prophets and the law prophesied until John.14 “And if you are willing to receive it, he is Elijah who is to come.15 “He who has ears to hear, let him hear!16 “But to what shall I liken this generation? It is like children sitting in the marketplaces and calling to their companions,17 “and saying: ‘We played the flute for you, And you did not dance; We mourned to you, And you did not lament.’18 “For John came neither eating nor drinking, and they say, ‘He has a demon.’19 “The Son of Man came eating and drinking, and they say, ‘Look, a glutton and a winebibber, a friend of tax collectors and sinners!’ But wisdom is justified by her children.”20 Then He began to rebuke the cities in which most of His mighty works had been done, because they did not repent:21 “Woe to you, Chorazin! Woe to you, Bethsaida! For if the mighty works which were done in you had been done in Tyre and Sidon, they would have repented long ago in sackcloth and ashes.22 “But I say to you, it will be more tolerable for Tyre and Sidon in the day of judgment than for you.23 “And you, Capernaum, who are exalted to heaven, will be brought down to Hades; for if the mighty works which were done in you had been done in Sodom, it would have remained until this day.24 “But I say to you that it shall be more tolerable for the land of Sodom in the day of judgment than for you.”

11:1-24 YAH CHANAN THE BAPTIZER IN THE GUARDHOUSE And so be it, when Yah Shua shelems misvahing his twelve disciples, he departs from there to doctrinate and to preach in their cities: and in the guardhouse, when Yah Chanan hears of the works of the Meshiah, he apostalizes through the hand of his disciples and words to him,  Are you he who comes? Or await we another?  Yah Shua answers, wording to them, Go and tell Yah Chanan what you hear and see — the blind see and the lame walk and the lepers purify and the mute hear and the dead rise and the poor evangelize: and graced — who offend not in me. THE WITNESS OF YAH SHUA CONCERNING YAH CHANAN THE BAPTIZER And when they go, Yah Shua begins to word to the congregation concerning Yah Chanan, What went you to the desolation to see? A reed shaken by the wind? But what went you to see? A man clothed in soft clothing? Behold, whoever clothe in the soft are in houses of sovereigns.  But, what went you to see? A prophet? Yes, word I to you, more than a prophet. For this is he concerning whom it is scribed.  Behold, I apostolize my angel in front of your face who prepares your way in front of you. Yesha Yah 40:3; Malachi 3:1 Amen! I word to you, there stands not, among those birthed of woman, a greater than Yah Chanan the Baptizer: and the least in the sovereigndom of the heavens is greater than he: and from the days of Yah Chanan the Baptizer until now the sovereigndom of the heavens is ruled by violence and the violent seize it. For all the prophets and the torah until Yah Chanan prophesied: and if you will to take it, he is Eli Yah, prepared to come. Whoever has ears to hear, hear!  And to whom liken I this generation? — likened to lads sitting in the markets  and shouting to their comrades and wording, We psalm to you and you dance not: we mourn to you and you dance not.  For Yah Chanan comes, not eating not drinking, and they word, He has a demon within:the Son of humanity comes eating and drinking, and they word,Behold, a man— gluttonous and drinking fermented wine, and befriending customs agents and sinners. But wisdom is justified by its works. YAH SHUA REPROACHES THE CITIES Then Yah Shua begins to reproach the cities those being wherein he was much empowered, and they repent not.  And he is wording, Woe to you, Kaurazin! Woe to you, Beth Sayada! If this power had been in Sur and Saidan that became within you, and most certainly they had repented in saq and ashes. However I word to you,  For Sor and Saidan it becomes more restful in the day of judgment, than for you.  And you, Kephar Nachum until sheol you descend: for if the power had become in Sedum, that became in you it had been abiding until this day. However I word to you, that for the earth of Sedum it becomes more restful in the day of judgment than for you. Aramaic NC

NOT THE MESSIAH THEY EXPECTED HIM TO BE

Jesus and John the Baptist. 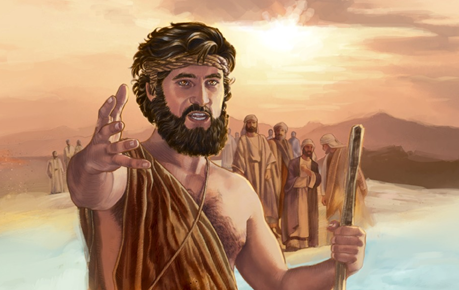 a. When Jesus finished commanding His twelve disciples: According to Bruce, to preach in their cities does not refer to the cities of the disciples, but the cities of Galilee. In this way Jesus gave His commissioned disciples room to do their work.

b.  He sent two of his disciples: It is also possible – but perhaps less likely – that John did not ask this question for his own sake, but for the sake of his disciples – he wanted them to go to Jesus and ask the question for themselves, causing them to focus their attention on Jesus.

c. John’s arrest was mentioned in Matthew 4:12; the full story of his imprisonment will wait until Matthew 14:3-12.

d. Herod Antipas of Galilee had paid a visit to his brother in Rome. During that visit he seduced his brother’s wife. He came home again, dismissed his own wife, and married the sister-in-law whom he had lured away from her husband. Publicly and sternly John rebuked Herod. It was never safe to rebuke an eastern despot and Herod took his revenge; John was thrown into the dungeons of the fortress of Machaerus in the mountains near the Dead Sea.

e. Are You the Coming One, or do we look for another: John 1:29-36and other passages indicated that before this, John clearly recognized Jesus as the Messiah.

John 1:29-36 The next day John saw Jesus coming toward him, and said, “Behold! The Lamb of God who takes away the sin of the world! 30 This is He of whom I said, ‘After me comes a Man who [a]is preferred before me, for He was before me.’ 31 I did not know Him; but that He should be revealed to Israel, therefore I came baptizing with water.”32 And John bore witness, saying, I saw the Spirit descending from heaven like a dove, and He remained upon Him. 3 I did not know Him, but He who sent me to baptize with water said to me, Upon whom you see the Spirit descending, and remaining on Him, this is He who baptizes with the Holy Spirit.’ 34 And I have seen and testified that this is the Son of God.”

The First Disciples35 Again, the next day, John stood with two of his disciples. 36 And looking at Jesus as He walked, he said, “Behold the Lamb of God!

Paul states, “Our paschal ( lamb, Christ, has been sacrificed” (1 Corinthians 5:7). The Passover sacrifice, also known as the Paschal lamb or the Passover lamb, is the sacrifice that the Torah mandates the Israelites to ritually slaughter on the evening of Passover and eat on the first night of the holiday with bitter herbs and matzo.

1 Corinthians 5:7, NASB: Clean out the old leaven so that you may be a new lump, just as you are in fact unleavened. For Christ our Passover also has been sacrificed.

In the Gospel of John it was John the Baptist who gave Jesus the title Lamb of God (John 1:29). The Book of Revelation speaks of the Lamb at least 29 times. In a vision John sees a lamb. Four living creatures and 24 elders fall before the Lamb and sing praise because he purchased all people with his blood (Revelation 5:9).

His present doubt may be explained because perhaps he himself had misunderstood the ministry of the Messiah. Perhaps he thought that if Jesus were really the Messiah, He would perform works connected with a political deliverance of Israel – or at least the deliverance of John, who was in prison.

f.  It is possible that John made a mistaken distinction between the Coming One and the Christ, the Messiah. There is some indication that some Jews of that time distinguished between a prophet to come promised by Moses (Deuteronomy 18:15) and the Messiah. The dominant note here is one of confusion; John’s long trial in prison has confused him.

Deuteronomy 18:15  The Lord your God will raise up for you a Prophet like me from your midst, from your brethren. Him you shall hear,

Jesus Christ is the King, Priest and Prophet 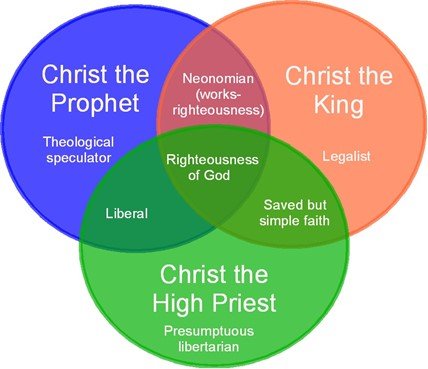 Perhaps the perception of a few.

However, Jesus Christ was the King, The High Priest and the Prophet.

Christ is the ANOINTED ONE. There were three persons who were anointed in the Old Testament:

“A prophet is not without honor, save in his own country, and in his own house,” Matthew 13:57.

“And they glorified God, saying, That a great prophet is risen up among us,” Luke 7:16.
John 4:19“The woman saith unto him, Sir, I perceive that thou art a prophet,” John 4:19.
“For Moses truly said unto the fathers, A prophet shall the Lord your God raise up unto you of your brethren, like unto me; him shall ye hear in all things whatsoever he shall say unto you,” Acts 3:22.

We will continue with Les.4 next week.