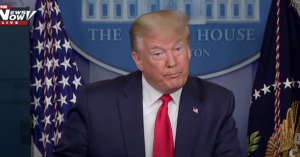 Mark this day, May 22, 2020, where The President of the United States, President Donald J. Trump just “declared,” The Church and other religious organizations to be “ESSENTIAL” to and for the people.

Many shall come against this declaration however, in the Constitution of the United States it is written:

Congress shall make no law respecting an establishment of religion, or prohibiting the free exercise thereof; or abridging the freedom of speech, or of the press; or the right of the people peaceably to assemble, and to petition the government for a redress of grievances.

We are not just “essential,” we have a constitutional right stating our freedoms in this United States and to my knowledge there has been no law passed by our law makers to legally alter this.

This day – I saw a tsunami being released from the mouth of our President, going all across the United States and then, unto the World. A shaking, if you will, of the kingdom of darkness as the President rebuked the closing of the churches and proclaimed the importance of the people being able to gather and worship Yahweh.

The ramifications of this proclamation are huge not only in our earthly realm, but in the spirit realm as well.

I was quickened with all the words relating water and remember the passing of the mantle from Elijah to Elisha. Elisha picked up the mantle when it fell from Elijah, but until he struck the water, it was not his.

Oh Hallelujah! We were born for such a time as this. Now let us begin the work of the restoration of Yahweh’s House, now not only on ground, but online too. We have not decreased, we are revived and on the way to the increase.

In the Name of Yahshua, Father thank You for moving through President Trump and bringing the church encouragement and a confirmation of our right to worship and assemble, not only as it is written in the Bible, but as it is written in our Constitution.