Last year we started a new decade in the Hebrew Calendar 5780 “The Year of the Mouth” because of its attachments to the Hebrew Letters ‘pey’ and ‘fey’, which are a picture symbol of a mouth.

As Bonnie Nelson has written previously, this next year Aleph, number one, is in Pey, symbolically the Ox is in the Mouth.

Symbolically in Rev. 4:7 The four living creatures are the New Testament Overcomers.

Much of what is written in Revelation 4 is surrounding the THRONE which is a place of ruling only done through our Christ Mind/Spirit.

The four symbols suggest majestic courage, strength, intelligence, and speed in the service of the Creator, all perceiving, mobile and flexible.

These four faces beautifully picture the completeness of salvation!

These Beasts can also be seen as our growth in Christ:

1st Beast- Lion- symbolizing our surrender to the Lion (Jesus Christ, Yeshua Ha’Masiach, the Lion of Judah). (freed from our beastly behavior)
2nd Beast- Calf/Ox- symbolizing our beginning walk with the Lord, immature, a tender shoot or sprout, a fresh delicate child, a little calf.
3rd Beast -Man- mature in Christ yet subject to weakness.( still sin conscious without that overcoming attitude)
4th Beast- Flying Eagle, Overcomer in Christ. Notice an eagle is a flesh-eating bird. This eagle is soaring high above.

The 2nd Beast- Calf/Ox- symbolizes our beginning walk with the Lord, immature, a tender shoot or sprout, a fresh delicate child, a little calf.

We are seeing revival, a move of God, spreading across the land.
https://www1.cbn.com/cbnnews/us/2020/september/thousands-going-wild-for-jesus-unending-baptisms-in-cow-troughs-revival-reaches-huge-crowds-in-the-heartland?fbclid=IwAR0CI4lCVRkb5k4yrZOU4ed6CNvOvsL56C3K0TP6qfg9GMYvxlQLWysfv0Y

These are the ones who have been silent but will become loud. Many are young, immature in their speaking. Yet, they will become a mighty voice in the Spirit. They will not just speak His words, but do the Will of the Father.

Acts 18:9 Now the Lord spoke to Paul in the night by a vision, “Do not be afraid, but speak, and do not keep silent;

Ps. 83:1 Now the Lord spoke to Paul in the night by a vision, “Do not be afraid, but speak, and do not keep silent;

Yes, they will hear God speak and resound His words.

This will spur the rest of the believers to move with the momentum God in the Days of Acceleration.

To move forward with the momentum of the Lord into the “Days of Acceleration”, the church will have to move away from the “Soulish/Sense Realm” of being Purpose Driven and Program Possessed, into and being flung forward into the “Spirit Realm” where we are Presence Motivated by the Person of Jesus/Yeshua Our plans and pursuits will be propelled forward, though, as we cooperate with the Esther anointing, Preparing the Bride for the Bridegroom.

This will release the Holy Spirit’s fresh oil upon our works. Thus, we will find another convergence occurring, as admonished in the book of James, where authentic faith unleashes corresponding works (James 2:18).

18 But someone will say, “You have faith, and I have works.” Show me your faith without your works, and I will show you my faith by my works.

ACCELERATION will happen as word and deed; character and giftedness, heaven and earth, mirror one another.

Open doors that have been closed will bring closure to things of the past. God’s presence will release favor upon chosen vessels that have passed through the fires of affliction. The breath of God will blow upon worshipping warriors and the purposes of God will accelerate at a rapid speed.

Let us have faith in God and move forward in these Days of Acceleration, in these days of the Silent Becoming Loud.

In the Words of William Booth: 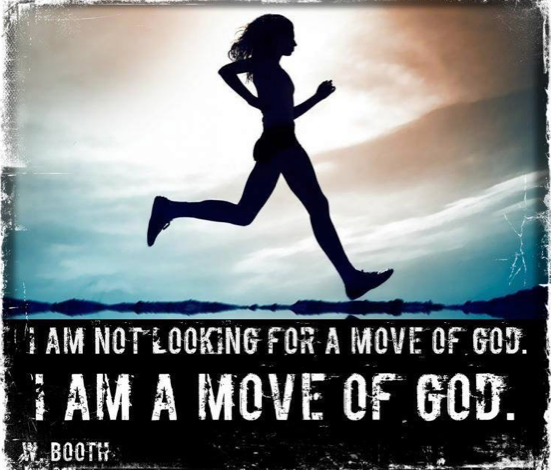 The platforms in our world today allow everyone to speak and release everything and anything through facebook, twitter and various other public market places. STOP releasing unrighteous thoughts.

It is vital to watch what is spoken through our mouth, keyboards and pens. Yahweh will reveal what battle to fight and when to be SILENT. Wait and listen for His correct kairos timing, for He is omnipresent, omnipotent and omniscient. He will be with us and He will never forsake us, so let us trust in Him as never before and step into the role He has set before us, with the faith in Him, to help us complete our task.

Teach us of Your Ways Father, for surely they are higher than ours.