In my search to bring deeper prophetic revelation into our prophetic training classes, I found the following article from Ian Liddle. I have been seeking to understand the underlying spiritual agenda happening in our Nation and the World and I believe this man is bringing forth revelation concerning the larger scope of issues we are dealing with. He is well studied and shares about a book he read, “The Comets of God” by Dr. Jeffrey Goodman. This article is worth your time and the book is available on Amazon for kindle $9.99.

Here is the article by Ian Liddle

The Tower of Babel – An Alternative View 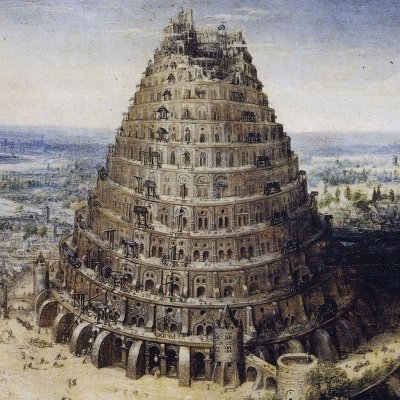 Is this story really about global government?

Before I begin, a word of warning: this could be seen as a controversial article. I hope that what I have written will make you think. If you disagree with me, I have no problem with that – as long as we can disagree in a spirit of Christian love. I have no desire “to strive about words to no profit, to the ruin of the hearers” (2 Timothy 2:14). In fact, I’d love to see your thoughts on the Disqus comments below. My ‘alternative view’ of the story of the Tower of Babel draws significantly from the seminal book ‘The Comets of God’ by Dr Jeffrey Goodman, whose remarkable insights I acknowledge with thanks.

The descendants of Noah spoke in different languages

In Genesis 10, we can read that the descendants of Noah were separated into their own lands, and separated according to their own languages, families and nations.
Where the text indicates that the different tribes spoke in different languages, the Hebrew word for ‘language’ is the word ‘lashon’. This word ‘lashon’ literally means ‘tongue’, and it is the standard word for ‘language’ throughout the Hebrew Scriptures.

The fact that the different nations spoke in different languages is reinforced by archaeological evidence, which includes a large number of cuneiform tablets. These ancient artefacts indicate that the inhabitants of Babel (or Babylon), as in Genesis 11, actually used at least two languages, Akkadian and Sumerian, whilst people in other regions evidently spoke in other languages.

After we have learned about the different languages in Genesis 10 (which is supported by archaeological evidence), the first verse of Genesis 11 appears to state: “Now the whole earth was of one language and of one speech.” Oh dear. If you will forgive the common misquote: ‘Houston, we have a problem.’ Did people speak in different tongues or just one common language?

If we look carefully at the Hebrew text in Gen 11:1, it literally says: “And all the earth was of one lip and one speech [or words].” The standard Biblical Hebrew word for ‘language’ (lashon) is actually not used here. The word ‘saphah’ (meaning ‘lip’) is used instead. So what is going on?

The opening conjunction of Gen 11:1 (the word ‘and’) indicates that this text follows on naturally from Genesis 10. We have not suddenly gone back in time. We are still looking at all the various tribes that descended from Noah, each group of people speaking their own language (lashon). I would suggest, therefore, that the word ‘saphah’ (which generally means ‘lip’) should not be translated as ‘language’. It indicates something else. And yes, I do know that in modern Hebrew the word ‘saphah’ is commonly used instead of ‘lashon’ to mean a language, but modern Hebrew is largely based on what Eliezer Ben Yehuda determined – with extra new words added as required. What is important here is what ‘saphah’ means in the Bible.

Many tongues – One voice

I find it ironic that the secular, humanist institution of the EU has probably solved the problem for us. Back in the early 1990s, the European Council released a poster which was based on Pieter Bruegel’s famous painting of the Tower of Babel. It carried the caption, “Europe: Many tongues, One voice 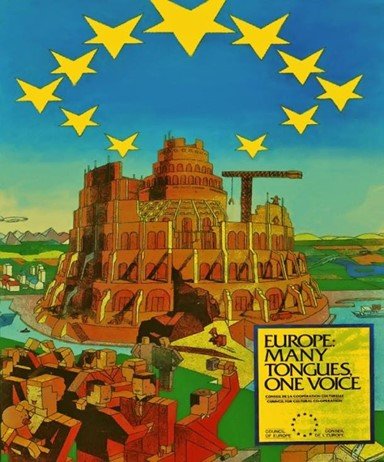 In line with this, I suggest that ‘saphah’ is better translated as ‘voice’ in Gen 11:1. Further to this, we need to understand that being ‘of one voice’ is an idiom for being united behind a single leader or a single government. Thus Gen 11:1 could be paraphrased to indicate that “the whole land was united behind one government and one commander.”

There is non-Biblical evidence to support this viewpoint. The Hebrew word ‘saphah’ (lip) can also be translated as ‘mouth’ (the NIV does this in two instances), and the Akkadian word for ‘mouth’ can also mean ‘government’. The ‘Sargon Chronicle’ relates how Sargon, founder of the Akkadian Empire (and maybe Sargon is just another name for Nimrod), conquered various other nations. This ancient record then literally states of Sargon that “He made its [the land’s] mouth be one”. This expression was translated by Dr A. Leo Oppenheim (1904-74), an acknowledged expert in Akkadian cuneiform writing and culture, as: “He [Sargon] established there a central government.”

Taking ‘saphah’ (lip or mouth) to be an idiom for ‘government’, and using some other permitted alternatives in English to translate various Hebrew words, I would now like to present a fresh translation of Genesis 11:1-9. Again, my thanks to Dr Goodman for his own translation in ‘The Comets of God’, upon which the following is loosely based.

“The whole earth was of one government and one command. And it came to pass, as they journeyed eastward, they found a plain in the land of Shinar, and they settled there. And they said one to another, ‘Let us make bricks and bake them thoroughly.’ And they used brick for stone, and tar for mortar. And they said, ‘Come, let us build for ourselves a city and a tower with its top in heaven, and let us make for ourselves an authority (i.e. an empire) lest we be scattered over the face of all the earth.’

And the LORD came down to see the city and the tower which the children of men built. And the LORD said, ‘Behold, the people are united and they all have one government; and this they begin to do, and now nothing they plan will be impossible for them. Come, let us go down and cause their government to fail, that they may not obey their one government.’

For me, the fresh translation also resolves other issues. I was always puzzled by Gen 11:6, in which the traditional translations say that nothing will be impossible for the people because they have one language. Well, speaking the same language did not help the UK Parliament when Theresa May was Prime Minister during the times of a very divided House of Commons from 2017 to 2019. For much of that time, nothing was agreed and little was achieved.

What permits a nation (or empire) to press ahead with whatever it wants to achieve is certainly nothing to do with speaking the same language. However, if the people are united behind a single government (or leader), then only God can stop them.

There is one other notable instance in the Old Testament where the Hebrew word ‘saphah’ is translated (or mistranslated) as ‘language’. In Zephaniah 3:9, many English translations state: “For then I will restore to the peoples a pure language, that they all may call on the name of the Lord and serve him with one accord.”

Many commentators have suggested that this refers to the language of Hebrew, and thus they believe this verse is a prophecy that Hebrew would be restored as a ‘living’ language once again. Largely due to the efforts of Eliezer Ben Yehuda (1858-1922), the early 20th century Jewish pioneers living in the British Mandate of Palestine began to use Hebrew as their ‘everyday’ language – after many centuries of not doing so.

By the time of Ben Yehuda’s death, enough Jewish settlers were speaking Hebrew that the British authorities recognized it as the official language of Jews in Palestine. Those Bible commentators who believe that Zeph 3:9 refers to this restoration of the use of Hebrew have declared the official status of Hebrew in modern Israel to be the prophetic fulfilment of Zeph 3:9.

However, we have a situation here. If I may re-tweet an earlier quote: ‘Houston, we have a problem.’ The context of Zeph 3:9 is ‘the Day of the Lord’, and the previous verse refers to God’s judgment being poured out on the assembled (Gentile) nations at the end of the age in a manner that parallels Zechariah 14:1-15. Thus the prophetic word in Zeph 3:9 is clearly meant to be fulfilled at the end of the age, with the return of Jesus, but certain commentators (who believe Zeph 3:9 refers to the restoration of a language) are telling us that this prophetic word has already been fulfilled. Since when did God change his mind and fulfil his prophecies at a time that differs from what he has already said?

The problem is resolved, of course, if we acknowledge that the Hebrew word ‘saphah’ does not actually mean ‘language’. It literally means ‘lip’ (or mouth), and I believe it is used here as an idiom for ‘government’. So maybe the English translations of Zeph 3:9 should state, “For then I will restore to the peoples a pure government, that they all may call on the name of the Lord and serve him with one accord.” And, actually, that is exactly what I expect to occur when Jesus returns.

The Hebrew word ‘saphah’ comprises the letters samekh, peh (or feh) and heh.
In the early Hebrew script (of over 3,200 years ago), these letters were pictographic. The letter samekh was represented by a thorn, and it carried the meanings of ‘sharp’, ‘pierce’ and ‘turning’. Peh was pictured as a mouth, and it also conveyed the concepts of ‘lips’, ‘speech’ and ‘blowing’. Heh was a little man with raised arms, and it could mean ‘behold’, ‘look’, ‘breath’, ‘sigh’ and ‘reveal’.

Putting these three pictures together, a ‘turning mouth’ that breathed was thus symbolic of a functioning mouth or lip(s), or whatever might come out from between those lips – like a voice, an utterance or speech. By extension, I guess it is easy enough to understand why many people believed that ‘saphah’ could also be a secondary word for ‘language’.

However, since the letter samekh generally represents ‘sharp’, then we would have ‘sharp speech’, maybe ‘imperious speech’ or ‘commanding speech’. As with the modern idiom of ‘giving someone some lip’, there is the idea of ‘laying down the law’. Thus ‘saphah’ (as lip or mouth) can convey the concepts of a command, a commander or a government.

Why does this matter?

To me, what is important about the story of the Tower of Babel is that it is really about God’s unwillingness to permit a global empire that does not worship him. It is about a pagan unitary empire rather than about the languages that people speak. The Akkadian Empire worshipped pagan gods of the heavens, and their patron deity was Inanna, the ‘Queen of Heaven’ – and the original ‘Whore of Babylon’.

God destroyed the city of Babel (Babylon), which was the ceremonial worship centre of the harlot religion of the Akkadians, and he will also put it into the hearts of ten rulers to destroy ‘Mystery Babylon’ for him (Revelation 17:16-17), since ‘Mystery Babylon’ is the ceremonial worship centre of the principal harlot religion of the End Times.

From 1985 to 2006, Prophecy Today was published in the UK in paper form and grew to have the largest UK readership of any Christian magazine. It became an iconic publication renowned for boldly declaring the word of God.
In 2015, Prophecy Today was re-born online.