The Keys to the Kingdom – Terry Thompson

THE KEYS OF THE KINGDOM 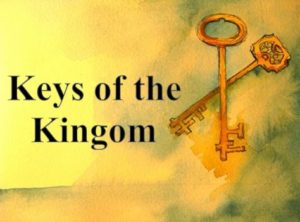 Have you ever locked your keys in your car? Haven’t we all? How many hours did it take out of your day? When you finally get your keys back it gave you a new appreciation for such a small thing like a key.

It amazes me to think that a two-ounce key can move a two and a half tons car. Let me enlarge your thinking for a moment, the same size key can move a 40-ton semitruck.  Without the key you are powerless to start the vehicle.  After you turn the key all kinds of power is released, whether it is for a car or a big truck it does not matter.  Sometimes it is the small things in life that make the biggest difference.

Jesus told Peter that He was going to give him the keys of the kingdom of heaven in Matthew 16.

The keys of the kingdom have been a great mystery to many in the church.  As a whole, people have just neglected to find the hidden value of what Jesus promised Peter.

When Jesus asked his disciples, “Who do men say that I am?” It opened up their minds and made them think. But when Jesus asked, “Who do you say that I am?” Peter was inspired by Father GOD and revealed what his spirit had received, “Thou Art the Christ the son of the Living God.” This started a process that triggered off enlargement. As soon as Peter used the revelation God had given him it opened up a whole new level of authority.  Peter’s brother Andrew had already revealed to Peter that Jesus was the Messiah and this was before Peter became one of Jesus’s disciples. Yet obviously it was just passive information (head knowledge that laid dormant).

When you read the text, you will notice that Jesus gave Peter a promise of the keys of heaven.  Yet we do not read that he received them at this time. Also, notice he did not say key but keys. Jesus gave these keys for the establishing and defending of the church. Let me open your thinking for a moment.  We think of keys that opens a door but have you ever thought of keys that a mechanic uses?  An alternative name for a mechanic’s key is a wrench or a tool.

In 2004, I had a God given task to take a revelation of encouragement to the pastors in the Bellarine Peninsula area of Victoria, Australia. As I was there, I taught a course on the fivefold ministry. The Holy Spirit told me that night to cover the meeting with the blood of Jesus and to bind all acts of witchcraft. The meeting went well and when it came to the ministry time the Spirit of the Lord moved powerfully. In the corner of my eye I could see the ministry team ministering to a lady who was crying. I did not get a witness with the lady; it was as though she was anchoring for all the attention. One of the  team members came over for me to minister to her for they could not help her. When I got in front of the lady my spirit immediately went on guard. Her tears dried up instantly and her finger was  pointed in my face. She started to swear like a sailor telling me that I was a B___ B____ and that I had bound her and her two friends from doing their mission. Yes, she was a witch and she had two other witches outside  triangulating the place where the meeting was being held.  They tried to bind the moving of the Holy Spirit, but they failed drastically.

THE RIGHT TOOLS FOR THE JOB

I guess you could say I put a wrench in the works of those three witches. (pardon the pun a key) The Holy Spirit gave me a revelation of what to do (a word of knowledge). I claimed the Blood of Jesus and bound the acts of witchcraft in the meeting.

As I was studying this topic one night I prayed to the Lord for an insight. In my dream I saw three different people; Joseph, Peter and Paul. Joseph had a dream about his family. Peter had a dream about a sheet with all kinds of animals on it, and Paul had a vision of the night of a man from Macedonia saying come over into Macedonia and help us.

They all had one thing in common! They saw in the spirit and with the revelation they applied the information and brought salvation to the situation. This was a practical outworking of how the keys work.

Nine keys or tools of the kingdom of heaven were freely given in the upper room on the day of Pentecost, and the gates of hell are being pushed back every day because of them. Paul talked about them in.

The church calls them gifts of the Spirit because they come freely, but a better name to describe them are tools or keys and they come hand in hand with the fruit of the Spirit. Sometimes it takes different tools or keys for different jobs. We may have to use the gifts of healing for a situation and gift of prophecy another time. We have been given different keys for different jobs.  When we use these tools, they unlock the whole of heaven to move on earth.

Do you remember what we said about how a two-ounce key could move a two and a half ton car?  The keys are just a token but when we use them the whole of heaven is unleashed on our behalf. This is an amazing truth, when God reveals His blueprint (revelation) to us we have the keys at our disposal to complete the job! Remember the keys of the Kingdom release the power of heaven on earth and the gates of hell shall not prevail against them!

Keep under the spout where the glory runs out!!!​