I have been noticing all the times the number “3” in seen in scripture. This leads me to believe that the number “3” is important to Yahweh and His plan for bringing His Kingdom on Earth.

Mark 4:26-28 reveals that the Kingdom of Yahweh will advance in three stages to maturity, “first the blade, then the head, after that the full grain in the head.” “Harvest” takes place after the grain reaches the third stage of growth. Yahshua reveals the Kingdom of Yahweh operates in three phases to completion. This applies to every area of our life in the spiritual realm. For example:

On and on we could go with illustrations of “3s” from scripture.

Everything in the “third dimension” is the greatest such as worship, love, power, glory, and so on, and are all realized as part of “manhood in Christ.” Yahshua walked in the third “dimension” and manifested the “abundant life” He was promising to all who would become His disciples.

As it relates to “prayer” and the “Third Awakening”, prayer also has three dimensions that reflect the Kingdom as presented in the three rooms of the Tabernacle. 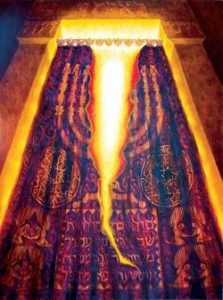 In order to enter the “third and greatest dimension” of prayer, we must go through the “veil of our flesh”; there must be the dying of self in order to live in the greatest dimension of the Kingdom of God. Going through the veil is the work of the Spirit of Christ in our lives bringing “brokenness” and full submission to the Father’s will, as is indicated by the “veil being torn from the top to bottom.” God begins and completes the work of “brokenness” in our lives until we are finally identified with Yahshua in His death for us preceded by His total surrender saying, “Not My will, but Thine be done.”

We have had two Great Awakenings in our Nation that preceded the social transformations that we experienced in our society. It is my opinion that the third (and final) Great Awakening will come as a result of “third dimension” prayer as well. Coming into the “third dimension” means bringing all things to “completion.” As we move from prayer in English to tongues, and finally to wailing and groanings, we will bring about the desired result. This cannot be done in the flesh but only with the Spirit of Christ within.

It is the level of prayer that is referred to in Zechariah 10:1 as “Latter Rain Prayer “, Elijah prayed this way in James 5:17-19 and brought about a great outpouring of power. As more and more believers allow Yahweh to move them into the third dimension of prayer, we will reach a “critical mass” of prayer that will give birth to the third great awakening and world harvest will be the result.

The third great awakening will come as a result of “third dimension” prayer. I don’t believe we will birth what God wants to bring to us by living in the outer court or inner court only as spiritual babies or adolescents.  We must have the same level of maturity that Christ walked in (Ephesians 4:12-15). Maturity in Christ requires that we “go through the veil” and have a full surrender of our lives to Christ. As fully mature “sons and daughters” we will be fully acquainted with the third dimension of living in Christ, able to pray in all three dimensions and bring about the will of Yahweh on Earth. We are the people of “restoration” who “worship the Father in Spirit and Truth”, with full knowledge of the Word (Colossians 1:9-12) and of the Spirit’s operation (John 3:34; Ephesians 4:13).