b. Then they crucified Him: It is significant to remember that Jesus did not suffer as the victim of circumstances. He was in control. Jesus said of His life in John 10:18, “No one takes it from Me, but I lay it down of Myself.” It is terrible to be forced to endure such torture, but to freely choose it out of love is remarkable. Can we ever rightly doubt God’s love for us again? Has He not gone to the most extreme length to demonstrate that love?
5. (35b) The Roman soldiers at the crucifixion of Jesus.
A. Divided His garments, casting lots: Jesus lost even His clothing at the cross. He was nailed to the cross as a naked, humiliated man.
1). Jesus came all the way down the ladder to accomplish our salvation. He let go of absolutely everything – even His clothes – becoming completely poor for us, so we could become completely rich in Him 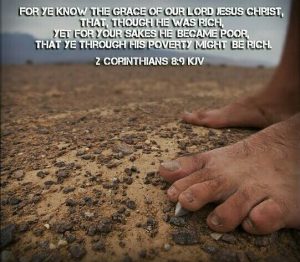 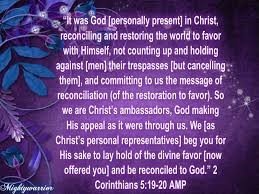 Although mankind has felt abandoned or forsaken by God since the fall he was not. Even before mankind was created God made provision for the possibility of the fall, even then he decided he would never forsake us. Scripture tells us that Jesus was the lamb that was slain from the foundation of the world (Rev 13:8)
Jesus, as fallen man, was identifying with us, taking on our sin; our grief, our confusion and the inaccurate feeling of abandonment by God that mankind had suffered since the fall. He was not speaking out of his feeling of abandonment, he knew God was with him, he was speaking out of ours. You might be thinking but the Bible says our sins have separated us from God and hidden his face from us (Is 59:2) Note here it is sin that does the separating, sin that hides Gods face from us making us not able to see him not God hiding himself from us because of sin. It is sin that is the bad guy not God. God has not forsaken or abandoned us because of our sin.
Col 1:21 says it all. Colossians 1:21 And you, who once were alienated and enemies in your mind by wicked works, yet now He has reconciled.
Another thing that was happening at that point was something that would be yet another indicator to all present there at the cross, that Jesus was in fact the Messiah, the long awaited one. A teaching practice in those days was that the teacher / rabbi would say the first verse (as we know them) of a Psalm or passage and the listeners would know what was coming, where the teacher was going by quoting that verse.
Those words “My God, my God why have you forsaken me” are a quote of the first verse of Ps 22 – the prophetic, messianic, psalm of deliverance written by David that begins with that cry but goes on to say that God hasn’t despised him or his cry, he has not hidden his face from him, he has heard when he cried to him; and the passage ends with the declaration “they shall come and proclaim his righteousness because he has done it!“ In other words “It is finished” he has delivered us! David is telling us ahead of time that the Father will not turn his face from Jesus and Jesus refers the Jews back to that passage of deliverance by using this phrase.
Most of those Jews listening would know that Jesus was referencing the entire passage especially any Pharisees or Sadducees there. They knew their scriptures and were familiar with the Messianic prophecies. For those that heard this cry aright, they would have heard that Jesus did not feel forsaken; they would have heard that he was proclaiming hope and deliverance.
Yes there were some who did not get that, who thought he was crying out to Elijah but those possibly were not even Jews and while we can’t know that for sure we do know that there were many people there from different nations. Any Jew listening would have known that Eli means “My God” not “Elijah” so they would not be likely to have made that comment.
I conclude that God never forsake Jesus. Jesus’ cry from the cross has for centuries been interpreted by the church to mean that the Father forsook Jesus, turned his face from him and left him to face the cross by himself. But is that true? Did the Father actually forsake Jesus and turn his back on him?
Throughout his lifetime Jesus made some interesting claims:
John 10:30, “I and my Father are one.” That reality was never rescinded before, during or after the cross.
In John 14:9 -11 Jesus says four times that he and the Father are in each other. v9 “He that has seen me has seen the Father.” 10 “Do you not believe that I am in the Father, and the Father is in Me? The words that I say to you I do not speak on My own initiative, but the Father abiding in Me does His works.” 11 “Believe Me that I am in the Father and the Father is in Me.”
In speaking of his coming death, Jesus believed the Father would not leave him to face it alone.
John 8:28,29 Then said Jesus unto them, When ye have lifted up the Son of man, then shall ye know that I am he, and that I do nothing of myself…. 29 And he that sent me is with me: the Father hath not left me alone.
John 16:32, Behold, the hour cometh, yea, is now come, that ye shall be scattered, every man to his own, and shall leave me alone: and yet I am not alone, because the Father is with me.
Now to the other question – will God forsake us? As his children, does God get angry with us and forsake us? No, He doesn’t ever forsake us, not for any reason!
So ,my question is: When did He ever leave or forsake us? Never!!
From our conception as little spirits in Gen 1:26 to our being born in our mother’s womb. Did he forsake us, no! Think on that.
We will continue Explanations of Matt. 27: 50-66 next week. And beginning of Matt. 28.
We will continue with Les.8 next week.
The blessings of the Lord are upon you whether by blood, adoption/sonship or assignment. The blessing of the LORD makes a person rich, and he adds no sorrow with it. Prov. 10:22
David & Mary Sue