1). Judas knew where to find them. Jesus could easily have foiled his plan by choosing a different place for this night, but this was not his intention.

1). And kissed Him: Kissed Him heartily. What a tremendous contrast between the woman in Simon’s house (Luke 7) and Judas! Both kissed Jesus fervently: with strong emotion; yet the one could have died for Him, the other betrays Him to death.

1). But how came Peter to have a sword? Judea was at this time so infested with robbers and cut-throats that it was not deemed safe for any person to go unarmed. He probably carried one for his mere personal safety.

1). A legion is judged to be six thousand foot and seven hundred horse. And this great army of angels is by prayer dispatched from heaven in an instant. The number is impressive, especially considering that one angel killed up to 185,000 soldiers in one night (2 Kings 19:35.)

1). This was only one of many illegalities made in the trial of Jesus. According to Jewish law, only decisions made in the official meeting place were valid. The first trial was held at the home of Caiaphas, the high priest.

1). I adjure you is a rare and formal expression (cf. 1 Kings 22:16 ) for a similar Old Testament formula), invoking the name of God in order to compel a true answer. This is therefore the climax of the hearing.

1).Power is a typically Jewish reverential expression to avoid pronouncing the sacred name of God (which might have laid Jesus open to the charge of blasphemy, though ironically it was precisely that charge on which he was condemned, Matthew 26:65.

1). Some ways that men still spit in the face of Jesus.

1). And, as if it would help distance himself from association with Jesus, Peter began to curse and swear. To call down curses on himself, sign of irritation and desperation; has lost self-control completely. 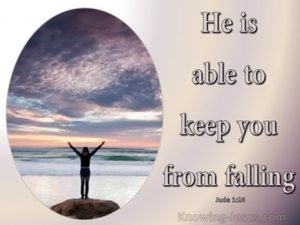 1). Apostasy is giving up the truth, as Judas did. Judas was sorry about his sin, but it was not a sorrow leading to repentance. Or perhaps he was when Jesus went to the lower parts and set the captives free. Something to consider.

2). As said backsliding is an Old Testament term: a decline from a spiritual experience once enjoyed. Peter slipped, but he will not fall; his bitter weeping and turning around will lead to repentance and restoration.

Matt. 27:1-35 When morning came, all the chief priests and elders of the people plotted against Jesus to put Him to death.2 And when they had bound Him, they led Him away and delivered Him to Pontius Pilate the governor.3 Then Judas, His betrayer, seeing that He had been condemned, was remorseful and brought back the thirty pieces of silver to the chief priests and elders,4 saying, “I have sinned by betraying innocent blood.” And they said, “What is that to us? You see to it!”5 Then he threw down the pieces of silver in the temple and departed, and went and hanged himself.6 But the chief priests took the silver pieces and said, “It is not lawful to put them into the treasury, because they are the price of blood.”7 And they consulted together and bought with them the potter’s field, to bury strangers in.8 Therefore that field has been called the Field of Blood to this day.9 Then was fulfilled what was spoken by Jeremiah the prophet, saying, “And they took the thirty pieces of silver, the value of Him who was priced, whom they of the children of Israel priced,10 “and gave them for the potter’s field, as the Lord directed me.” 11 Now Jesus stood before the governor. And the governor asked Him, saying, “Are You the King of the Jews?” So Jesus said to him, “It is as you say.”12 And while He was being accused by the chief priests and elders, He answered nothing.13 Then Pilate said to Him, “Do You not hear how many things they testify against You?”14 But He answered him not one word, so that the governor marveled greatly. 15 Now at the feast the governor was accustomed to releasing to the multitude one prisoner whom they wished.16 And at that time they had a notorious prisoner called Barabbas.17 Therefore, when they had gathered together, Pilate said to them, “Whom do you want me to release to you? Barabbas, or Jesus who is called Christ?”18 For he knew that they had handed Him over because of envy.19 While he was sitting on the judgment seat, his wife sent to him, saying, “Have nothing to do with that just Man, for I have suffered many things today in a dream because of Him.”20 But the chief priests and elders persuaded the multitudes that they should ask for Barabbas and destroy Jesus.21 The governor answered and said to them, “Which of the two do you want me to release to you?” They said, “Barabbas!”22 Pilate said to them, “What then shall I do with Jesus who is called Christ?” They all said to him, “Let Him be crucified!”23 Then the governor said, “Why, what evil has He done?” But they cried out all the more, saying, “Let Him be crucified!”24 When Pilate saw that he could not prevail at all, but rather that a tumult was rising, he took water and washed his hands before the multitude, saying, “I am innocent of the blood of this just Person. You see to it.”25 And all the people answered and said, “His blood be on us and on our children.”26 Then he released Barabbas to them; and when he had scourged Jesus, he delivered Him to be crucified.27 Then the soldiers of the governor took Jesus into the Praetorium and gathered the whole garrison around Him.28 And they stripped Him and put a scarlet robe on Him.29 When they had twisted a crown of thorns, they put it on His head, and a reed in His right hand. And they bowed the knee before Him and mocked Him, saying, “Hail, King of the Jews!”30 Then they spat on Him, and took the reed and struck Him on the head.31 And when they had mocked Him, they took the robe off Him, put His own clothes on Him, and led Him away to be crucified. 32 Now as they came out, they found a man of Cyrene, Simon by name. Him they compelled to bear His cross.33 And when they had come to a place called Golgotha, that is to say, Place of a Skull,34 they gave Him sour wine mingled with gall to drink. But when He had tasted it, He would not drink.35 Then they crucified Him, and divided His garments, casting lots, that it might be fulfilled which was spoken by the prophet: 1 “They divided My garments among them, And for My clothing they cast lots.” Taken from Ps. 22:18

27:1-35 YAH SHUA FACES PHILATAUS And when, being dawn, they take counsel concerning Yah Shua — all the Rabbi Priests and elders of the people so as to deathify him:and they bind him and take him and shelem him to Philataus the governor. THE REGRET OF YAH HUDA-Then Yah Huda the shelemer, when he sees he is condemned, repents, and goes and returns the thirty silver to the Rabbi Priests and elders, wording, I sinned in sheleming innocent blood. And they word to him, what is that to us? You know — you. and he throws the silver in the nave and departs and goes and strangles his soul. And the Rabbi Priests take the silver, and word, it is not allowed to cast the qurbana into the house because it is the price of blood. And they take counsel, and they merchandise there the field of the potter as a house of a tomb of strangers: because of this that field is called, The field of blood until this day.— then to fulfill what was worded through the hand of the prophet, who worded, And I take the thirty silvers the price of the precious that the sons of Isra El agreed: and I give them for the field of the potter as Yah Veh misvahed to me.  John 11:12,13 And Yah Shua stands in front of the governor: and the governor asks, wording to him, Are you the sovereign of the Yah Hudaya?  And Yah Shua word to him, You worded. — and when, in his being accused by the Rabbi Priests and elders ,he replies not a word. Then Philataus words to him, Hear you not how much they witness concerning you? And he gives him not a word — not one word so concerning this, the governor marvels greatly. And at every feast the governor has been accustomed to release one captive to the congregation — being whom they will: and being bound, is a famous prisoner called Bar Aba: and when they congregate Philataus words to them, whom will you that I release to you? Bar Aba? Or Yah Shua, called the Meshiah? — for Philataus knows they shelem him of envy. And when the governor sits upon his bamah, his own woman apostolizes to him, wording, You — have naught to do with that just man: for I suffered much this day in a dream because of him. And the Rabbi Priests and elders convince the congregation to ask for Bar Aba and destroy Yah Shua. The governor answers, wording to them, who of the two will you that I release to you?  And they word, Bar Aba. Philataus words to them, And with Yah Shua called the Meshiah — what work I to him?  They all word to him, Stake!  And the governor words, Indeed, for what evil has he worked?  And they shout excessively, wording, Stake!  And when Philataus sees he gains naught whatever, but rather, a riot being excessive, he takes water, washes his hands in the eyes of the congregation, wording, I absolve of the blood of this just person: you acknowledge. And all the people answer, wording, His blood — upon us and upon our sons.  BAR ABA RELEASED, YAH SHUA SHELEMED – Then he releases Bar Aba to them: and tortures Yah Shua with whips, and shelems him to stake. Then the strategists of the governor lead Yah Shua into the praetorium, and congregate all the squad to him: and they strip him and clothe him in a scarlet robe and they braid a wreath of thorns and place it upon his head and a reed in his right and they eulogize upon their knees in front of him, and mocking therein, wording, Shalom, sovereign of the Yah Hudaya! And they spit upon his face and taking the reed and wounding him on the head and when mocking within, they strip his robe and cloth him in his own garment and lead him to stake him.  And when they go, they find a man — a Qurinaya, Shimun by name, and they compel him to bear his stake: and they come to a place called Gagulta — clarified, Skull: and they give him vinegar to drink mingled with gall and he tastes, and wills to not drink. YAH SHUA STAKED – And when they stake him and divide his garments by loto fulfilling shalam what the prophet worded, “They divided my garments among them and upon my garment they cast lots.” Aramaic NC

We will continue with explanations for Matthew 27:1-66 next week

We will continue with Les. 8 next week.