LESSON 8
THE GOSPEL ACCORDING TO MATTHEW
CHPTRS. 25-28

A. The risen Jesus.
1. (1-3) Mary Magdalene and Mary of Bethany find an angel at the tomb.
a. Mary Magdalene and the other Mary came to see the tomb: They came to finish the preparation of Jesus’ body, which was cut short by the Sabbath (Luke 24:1-3). So, after the Sabbath on Sunday (the first day of the week), they came to the tomb – fully expecting to find the dead body of Jesus.

b. There was a great earthquake: Matthew alone notes this earthquake. The earthquake did not cause the stone to be rolled away; if anything, the angelic rolling of the stone prompted the earthquake.

c. An angel of the Lord descended from heaven and came and rolled back the stone from the door and sat on it: When the women came to the tomb, they saw the stone rolled away and an angel sitting on the stone. The door to the tomb was wide open.
2. (4-6) The angel’s message.
a. And the guards shook for fear of him and became like dead men: The Roman soldiers responsible for guarding the tomb were terrified. The angelic presence made these professional soldiers tremble and faint.

b. He is not here, for He is risen: For the first time, the followers of Jesus – these faithful women – heard what they did not expect to hear. They heard that Jesus was not in the tomb but risen to resurrection life. 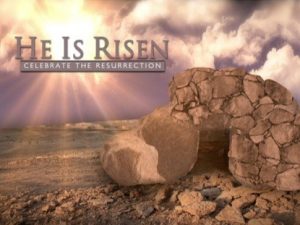 c. Come, see the place where the Lord lay: The stone was not rolled away to let Jesus out. John 20:19 tells us that Jesus, in His resurrection body, could pass through material barriers. It was rolled away so that others could see in and be persuaded that Jesus Christ was raised from the dead.

3. (7-8) The angel’s instructions to Mary Magdalene and Mary of Bethany.
a. Go quickly and tell His disciples that He is risen from the dead: The angel commanded them to be the first messengers of the good news of Jesus’ resurrection. Since these women were some of the few people courageous enough to publicly identify themselves with Jesus, it was an appropriate honor.
1). Not first to them who were the heads of the Church, as it were, but first of all to lowly women, did the Lord appear; and the apostles themselves had to go to school to Mary Magdalene and the other Mary to learn that great truth.

b. He is going before you into Galilee; there you will see Him: This assured the women they would see the resurrected Jesus. He wasn’t simply raised from the dead; He was raised to continue His relationship with them.

4. (9-10) Mary Magdalene and Mary of Bethany meet a risen Jesus.
a. As they went to tell His disciples: The women met Jesus as they obeyed the command to tell the news of the resurrection.

d. Do not be afraid. Go and tell My brethren to go to Galilee, and there they will see Me: Jesus told the women to do the same thing that the angel told them to do.

5. (11-15) The cover-up of the resurrection begins with the bribery of the guards.
a. Tell them, His disciples came at night and stole Him away while we slept: This cover-up attempt shows the darkness of these priests. They knew the truth of the resurrection, yet they rejected that truth.

b. While we slept: The cover-up also shows their foolishness. If it was true that the guards were asleep, they could not know that it was His disciples that stole the body of Jesus.

c. This saying is commonly reported among the Jews until this day: Through the years, there have been many objections suggested to the resurrection of Jesus. Some say He didn’t die at all, but just swooned or fainted on the cross and spontaneously revived in the tomb. Others say He really died, but His body was stolen. Still others suggest He really died, but His desperate followers hallucinated His resurrection. A plain, simple understanding of these evidences of the resurrection of Jesus answers all of these theories, and shows they take far more faith to believe than the Biblical account does.

B. The great commission meet.
1. (16-17) The disciples meet Jesus at Galilee.
a. The eleven disciples went away into Galilee: Matthew doesn’t tell us about the Jerusalem appearances of Jesus to His disciples, as John does. Matthew was more interested in showing that the promise of Jesus in Matthew 26:32 was fulfilled.
b. When they saw Him, they worshiped Him: This was not their first meeting with the risen Jesus; but it was an important one. At this meeting, they received their apostolic commission.
c. They worshiped Him; but some doubted: The natural reaction to encountering the risen Jesus is worship, even if some had to overcome uncertainty and hesitation – probably from feeling it was too good to be true, and lingering shame from having forsaken Jesus during His suffering.

Matt. 28:18-20 And Jesus came and spoke to them, saying,“All authority has been given to Me in heaven and on earth.19 “Go therefore and make disciples of all the nations, baptizing them in the name of the Father and of the Son and of the Holy Spirit,20 “teaching them to observe all things that I have commanded you; and lo, I am with you always, even to the end of the age.” Amen.
28:18-20 THE FINAL MISVAH OF YAH SHUA And Yah Shua approaches and words with them, and words, All sultanship is given mein the heavens and on earth. And as my father apostolized me, I apostolize you. So go and disciple all peoples, baptizing them in the name* of the Father and the Son and the Holy Spirit: doctrinating them to guard all — whatever I misvahed you: and behold, I am with you — I — every day until the shalam of the world. Ame.: Exodus 3:3—15; Aramaic NC 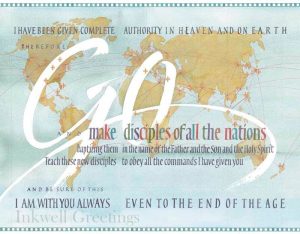 C. THE GREAT COMMISSION
1.(18-20) Jesus instructs His disciples regarding their duty after His departure.
a. All authority has been given to Me in heaven and on earth: This commission that follows is given in light of the authority of Jesus. This indicates that this is an authoritative command, not a suggestion. It is the same idea as if an officer reminded a private of his rank before he gave the order. Because He has this authority, He can send whomever He wills to do whatever He pleases. That authority he has given to us.
· We do not seek any other power.
· We defy every other power.
· We know our powerlessness will not hinder the progress of His kingdom.
· We give all our power unto Him.

Gen.1:28 Then God blessed them, and God said to them, “Be fruitful and multiply; fill the earth and subdue it; have dominion over the fish of the sea, over the birds of the air, and over every living thing that [a]moves on the earth.”

c. Make disciples of all the nations: The command is to make disciples, not merely converts or supporters of a cause. The idea behind the word disciples is of scholars, learners, or students.

d. Of all the nations: In His previous ministry, Jesus deliberately restricted His work to the Jewish people (Matthew 15:24) and previously sent His disciples with the same restriction (Matthew 10:6). Only in rare exceptions did Jesus minister among the Gentiles (Matthew 15:21-28). Now all of that is in the past, and the disciples are commissioned to take the gospel to all the nations. There is no place on earth where the gospel of Jesus should not be preached and where disciples should not be made.

e. Baptizing them in the name of the Father and of the Son and of the Holy Spirit: Significantly, when Jesus told them to go to all the nations, He did not tell them to circumcise those who became disciples. Instead, they were to baptize them, suggesting the break with traditional Judaism.

f. Teaching them to observe all things that I have commanded you: Disciples are made through teaching. This teaching is not with words only, but with the power of the always-present Jesus. He will be present with His people until the job of making disciples is done – until the end of the age.

g. Lo, I am with you always, even to the end of the age: Jesus sent His disciples with a mission to fulfill, but He did not send them alone. The promise of His constant presence was more than enough to strengthen and guide the disciples as they obeyed Jesus in making disciples of all the nations.
1). His presence means privilege, because we work with a Great King. Paul understood this principle well in 1 Corinthians 3:9, where he wrote: For we are God’s fellow workers. Since Jesus promised, “I am with you always,” then we work together with Him in all our service. We certainly work for Jesus, but more than that, we work with Jesus. We are co-laborers with Him.

Notice the Word says to make disciples and teach. (not just evangelize)

JESUS HAS GIVEN HIS AUTHORITY TO US; WE ARE TO GO AND MAKE DISCIPLES OF ALL NATIONS AND PEOPLES. LET US FULFILL THE GREAT COMMISSION!!

Barclay, William. The Gospel of Matthew, Volume One (The New Daily Study Bible)

Albert Barnes from Barnes Notes on the New Testament

Dr. Tim and Theresa Early Apostles, Ministry Father, Life Coach & Founders of the Foundation of the Apostles and Prophets International

Spurgeon’s Commentary on The Bible

This concludes our lessons of the Book of Matthew teaching. We will begin next week with the book of Colossians.