Jesus/Yeshua Transfigured on the Mount of Transfiguration

b. Arise, and do not be afraid: The disciples were once again uniquely in awe of Jesus. This helps explain the purpose of the Transfiguration: to reassure the disciples that Jesus was the Messiah, even if He would indeed be crucified as He had so surprisingly revealed.
1). Note the context: Jesus just revealed His humiliation and sufferings to them. It makes sense that they receive another divine testimony to Jesus’ status as the Son of God at this time.

c. When they had lifted up their eyes, they saw no one but Jesus only: It is significant that their entire focus was forced upon Jesus once again. The cloud was gone; Moses had left, and Elijah had disappeared.
1). It might have been that after the events of the transfiguration, no one remained for the disciples. Theoretically, when the experience was over, there would have been no Moses, no Elijah, and no Jesus. This is exactly the experience of many. They have some spiritual experience or receive some ministry from the Holy Spirit of God; but when it is over, it is over – done and gone. Nothing remains.

5. (9-13) The problem of Elijah coming first.
a. Tell the vision to no one until the Son of Man is risen from the dead: Wisely, Jesus told the disciples to not speak of the transfiguration until after His resurrection. The resurrection of Jesus was the final confirmation of His ministry and glory; until then, reports of the transfiguration would be more likely to test the faith of those who did not see it rather than strengthen their faith.

c. Indeed, Elijah is coming first and will restore all things: Jesus reassured the disciples that Elijah would indeed come first. But the first coming of Jesus did not bring the great and dreadful day of the LORD. Instead, the Malachi 4:5 coming of Elijah is probably best identified with the appearance of the two witnesses of Revelation 11:3-13, and then the Second Coming of Jesus.

B. Jesus casts out a difficult demon from a boy.
1. (14-16) A demon too tough for the disciples to handle.
a. Have mercy on my son, for he is an epileptic: This particular boy’s epileptic symptoms were demonic in origin (Matthew 17:18), though this certainly could not be said about every case of epileptic symptoms, either then or today. The narrative in Mark 9:14-29 tells us that the boy was made deaf and dumb by this demon.
1). Matthew describes the boy by the verb seleniazesthai, which literally means to be moonstruck.

b. So I brought him to Your disciples, but they could not cure him: Sometimes Jesus’ followers fail, but Jesus never does. The man was wise for going straight to Jesus when His followers failed.
1). On previous occasions, the disciples did cast out demons (Luke 10:17). Yet here they could not cure him. This is because there are ranks of demonic powers (Ephesians 6:12), and evidently some demons are stronger (more stubborn, resistant) than others. Since the disciples had been given the authority to cast out demons before (Matthew 10:8), apparently this demon was more difficult than most.

2. (17-21) Jesus easily casts the demon out.
a. O faithless and perverse generation, how long shall I be with you? There is a sense that Jesus is frustrated with His disciples. His season of ministry before the cross was coming to an end, and perhaps He felt frustration that the disciples did not have more faith.

c. Because of your unbelief: Jesus laid the inability of the disciples to cast out the demon at their unbelief. We are told in Mark 16 to cast out demons.

Mark 16:17 And these signs will follow those who [d]believe: In My name they will cast out demons; they will speak with new tongues; 18 they[e] will take up serpents; and if they drink anything deadly, it will by no means hurt them; they will lay hands on the sick, and they will recover.” 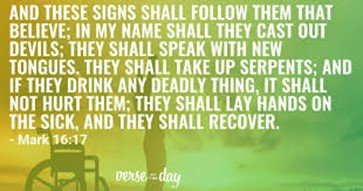 2). There was no point in blaming the boy or his father or the demon, though the demon was strong and had been there long. The fault lay in the disciples. When the ministers of the Gospel find their endeavors, with respect to some places or persons, ineffectual, they should come, by private prayer, to Christ, humble themselves before him, and ask to be informed whether some unforgiveness in themselves have not been the cause of the unfruitfulness of their labors.

d. If you have faith as a mustard seed: The faith that we must have has more to do with what kind of faith it is than with how much faith there is. We have the faith of God. Gal. 2:20 & Mark 11:25. And we grow in faith in the soulish realm. A small amount of faith, as small as a mustard seed (a very small seed), can accomplish great things if the faith of God is spoken and demonstrated. Everyone has been given the measure of faith, the faith of God.
1). You will say to this mountain, “Move from here to there”: “Jesus here in effect calls faith an ‘uprooter of mountains,’ a phrase current in the Jewish schools for a Rabbi distinguished by legal lore or personal experience.

2). Prayer and fasting demonstrate:
· Great willingness to identify with the afflicted person.
· Great dependence upon God.
· Great desire and compassion for the sake of deliverance.

D. Look forward to the death and resurrection of Jesus.
1. (22-23) Jesus reminds His disciples about His future sufferings.
a. The Son of Man is about to be betrayed: Though they were frequent, these reminders about Jesus’ suffering and resurrection were disbelieved and forgotten by the disciples until after His resurrection (Luke 24:6-8).

b. And the third day He will be raised up: Jesus rarely told His disciples about His coming death without also telling of His coming resurrection. We know that the disciples didn’t really comprehend the glorious triumph of the resurrection, because they were exceedingly sorrowful.

2. (24-26) Time to pay the temple tax.
a. Does your Teacher not pay the temple tax? This was a normal tax or fee applied to every Jewish man. Faithful Jewish men paid this obligation; others sought to escape the responsibility.
1). It was, however, also a matter of controversy, as the Sadducees disapproved of the tax, and the men of Qumran paid it only once in a lifetime.
2). Payment could be made in person at the Passover festival in Jerusalem…but collections were made in other areas of Palestine and abroad a month earlier. This incident therefore takes place about a month before Passover.

b. From whom do the kings of the earth take customs or taxes, from their sons or from strangers? Peter gave the quick and natural answer to this question. But then Jesus explained that He is not liable to pay this tax, because the Father doesn’t require it of His own Son.
1). Rabbis were exempt from paying this tax, and so were the priests in Jerusalem; would Jesus claim a similar exemption? The question assumes that he does pay regularly, and Peter agrees.

3. (27) Jesus pays the tax anyway, and by miraculous provision.
a. Nevertheless, lest we offend them: Jesus was not obligated to pay this tax under the principle He had just discussed with Peter; that as a son, not a servant, He did not have to pay this temple tax. Yet Jesus also recognized the importance of avoiding needless controversy, and so was willing to pay the tax so as to not offend those who questioned.
1). The use of the Greek word skandalizein means: Therefore Jesus is saying: “We must pay so as not to set a bad example to others.” We must not only do our duty, we must go beyond duty, in order that we may show others what they ought to do.

b. Cast in a hook: Peter was a professional fisherman who used nets, not a hook and a line. It must have humbled Peter to fish in this manner, and we can imagine that he hoped none of his other fishermen friends saw him trying to catch one fish at a time.
1). How this money came into the mouth of the fish is a very idle dispute, considering that he that speaks was the Creator of all things. He owns the cattle on a 1,000 hills, Ps. 50:10-11.

Ps. 50: 10-11 ( I) have no need of a bull from your stall or of goats from your pens, for every animal of the forest is mine, and the cattle on a thousand hills. (Infinitely owns everything) I know every bird in the mountains, and the creatures of the field are mine. 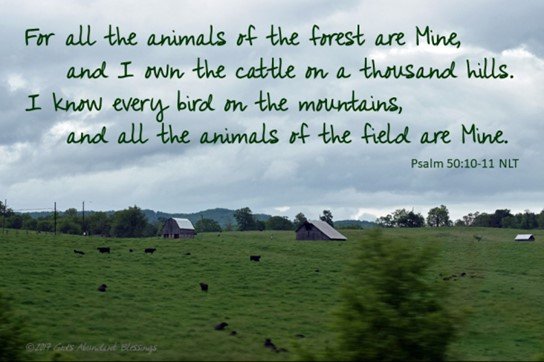 c. Take that and give it to them for Me and you: Jesus trusted in the miraculous provision of God. It’s not every day – or any day – that someone catches a fish and takes a coin out of its mouth. But Jesus used God’s provision to pay His taxes.
1). The Son of God pays the tax levied for his Father’s house; but he exercises his royal prerogative in the act and takes the shekel out of the royal treasury. In essence that is what is done here. The father owns the cattle on a thousand hills, Ps. 50:10. As the Son of Man he pays, but first as God he causes the fish to bring him the shekel in its mouth.
2). We don’t know why Jesus did not tell Peter to provide enough to pay for all the disciples. Perhaps it was implied or understood.
3). Yet He did pay for Peter; as a foreshadow of the work of redemption for all men. Jesus, who did not actually owe the price, paid it nevertheless – and at the same time, with the same price, paid for Peter as well.