The Gospel of Matthew – Lesson 5

VERSE 8- FOR THE SON OF MAN IS LORD EVEN OF THE SABBATH DAY.

We have already learned; Jesus is the Sabbath.

A. In addition to the other arguments he made he is saying that he is above the Law of Moses.
1.This is a claim for divinity.
B. This verse has been cited as proof that we should keep the Sabbath today by some.
1. Completely out of context.

A. Notice Luke’s account.
1. Luke tells us that this is a different Sabbath day then the one previously in question.
2. Luke 6:6.
3. This is another evidence that Matthew did not follow a strict chronological order but grouped by similar events.
4. Luke tells us Jesus in entering the synagogue-teaching.
a. Luke 6:6.
B. This doubtless took place in Galilee, probably in Capernaum.

VERSE 10-“AND, BEHOLD, THERE WAS A MAN WHICH HAD HIS HAND WITHERED. AND THEY ASKED HIM, SAYING, IS IT LAWFUL TO HEAL ON THE SABBATH DAYS? THAT THEY MIGHT ACCUSE HIM.”

A.”AND, BEHOLD, THERE WAS A MAN WHICH HAD HIS HAND WITHERED.”
1. They knew Jesus attitude of love and mercy toward those who were sick and downtrodden.
2. The two attitudes contrasted.
a. When Jesus saw the man, He saw a fellow member of the human race in need.
b. When the scribes and Pharisees saw him they saw an opportunity to trap be the enemy.
3. The man had an affliction that paralyzed his hand.
a. Luke says it was his right hand.
b. For most this would be their work hand. 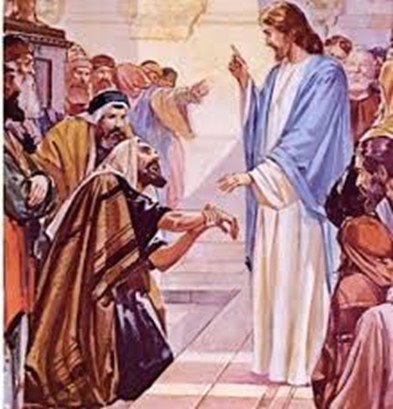 B. “AND THEY ASKED HIM, SAYING, IS IT LAWFUL TO HEAL ON THE SABBATH DAYS? THAT THEY MIGHT ACCUSE HIM.”
1. Matthew is the only gospel writer who refers to the Pharisees’ question.
2. While someone could reason with surface reasoning that it was wrong to heal on the Sabbath, Jesus understood that a proper interpretation of the Law allowed for acts of mercy for the sick.
C. Their purpose was not for information.
1. It was to gather evidence against Jesus.
2. They were trying to be more careful, not attacking Jesus directly on this occasion, but asking what perceived as a loaded question.
D. Another contrast……
1. Their wickedness was beginning to anticipate the occasions that Jesus would exercise his goodness and mercy.

VERSE 11-“AND HE SAID UNTO THEM, WHAT MAN SHALL THERE BE AMONG YOU, THAT SHALL HAVE ONE SHEEP, AND IF IT FALL INTO A PIT ON THE SABBATH DAY, WILL HE NOT LAY HOLD ON IT, AND LIFT IT OUT?”

VERSE 12-“HOW MUCH THEN IS A MAN BETTER THAN A SHEEP? WHEREFORE IT IS LAWFUL TO DO WELL ON THE SABBATH DAYS.”

A. Jesus used this “How much better” line of argument in Matthew 6:26ff.
B. “WHEREFORE IT IS LAWFUL TO DO WELL ON THE SABBATH DAYS.”
1. Again, Jesus says that he was not transgressing the Sabbath day law by doing good to someone in need.
2. This is not dealing with “excusable violations of the Sabbath” as some commentators contend.
a. It is never right to commit an evil act so that good may come.
1. Romans 3:8.

VERSE 13-“THEN HE SAID TO THE MAN, STRETCH FORTH YOUR HAND. AND HE STRETCHED IT FORTH: AND IT WAS RESTORED WHOLE, LIKE AS THE OTHER.”

VERSE 14-BUT THE PARISEES WENT OUT AND PLOTTED HOW THEY MIGHT KILL JESUS.

A. There is an obvious difference between Christ and the Pharisees on the Sabbath.
1.The Pharisees were not there to worship God. Their questions were not asked out of loving concern. They were there as accusing authorities who wanted to judge Christ by their own regulations.

B. At the time, the Jews had been compiling for a number of years a code of regulations by which they hoped to make it virtually impossible for a person to sin.
1.Eventually, there were 1,521 regulations just regarding keeping the Sabbath! These people did it in sincerity, a misdirected zeal.
2.What happened is that they turned the observance of the day into a legalistic ritual rather than a loving service toward God and fellow man.

C. The Pharisees plotted (trying to find a regulation against Jesus.) They would allow the rescue of a sheep on the Sabbath but not the rescue—through healing—of a human being.

VERSE 15- BUT WHEN JESUS KNEW IT, HE WITHDREW FROM THERE. AND GREAT MULTITUDES FOLLOWED HIM, AND HE HEALED THEM ALL.

A. The opposition of some of the Pharisees drove Jesus into semi-retirement for a little while. He was not seeking notoriety, and He was not about to provoke the Pharisees into a fight,
B. But the crowds followed Him and He healed them all.

VERSE 16- YET HE WARNED THEM NOT TO MAKE HIM KNOWN,

A. This charge was given, either to the multitude that followed Him, and were healed by Him, that when they returned to the respective places from where they came,
1. They would not make it known to His enemies where he was, and what He had done to them; being neither desirous of popular applause and glory, nor willing to provoke them more, nor to fall into their hands as yet;
B. In one incident Jesus intimated the unclean spirits, that they would not declare who He was, the Son of God, they confessed Him to be.
That they:
1. should neither tell where He was, nor who He was; and this charge was a very severe one; for the word signifies a charge with threatenings, should they not observe his order.

VERSE 17- THAT IT MIGHT BE FULFILLED WHICH WAS SPOKEN BY ISAIAH THE PROPHET SAYING:
VERSE 18- “HERE IS MY SERVANT WHOM I HAVE CHOSEN, THE ONE I LOVE, IN WHOM I DELIGHT; I WILL PUT MY SPIRIT ON HIM, AND HE WILL PROCLAIM JUSTICE TO THE NATIONS.”
VERSE 19- HE WILLL NOT QUARREL OR CRY OUT; NO ONE WILL HEAR HIS VOICE IN THE STREETS.
VERSE 20-A BRUISED REED HE WILL NOT BREAK, AND A SMOTHERING WICK HE WILL NOT SNUFF OUT, TILL HE HAS BROUGHT JUSTICE THROUGH VICTORY.
VERSE 21-IN HIS NAME THE NATIONS WILL PUT THEIR HOPE. 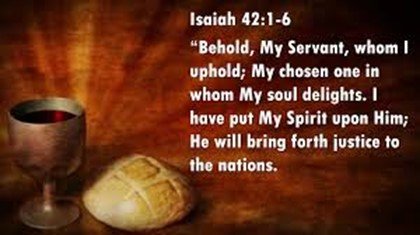 We will continue with Les.5 next week.