The Gospel of Matthew – Lesson 5 (Continued)

CONCLUSION
1. Following these sensible guidelines to interpreting the Parables of Jesus, we can look forward to the joy of understanding more fully the mysteries or revealed truths of the kingdom of heaven.
2. As we get into the parables themselves, I hope that we will appreciate how blessed we are to live in an age when people who have a desire to learn about the kingdom can do so:

But blessed are your eyes for they see, and your ears for they hear; for assuredly, I say to you that many prophets and righteous men desired to see what you see, and did not see it, and to hear what you hear, and did not hear it. – Matt. 13:16-17 3.

3.What we are about to study in these parables concern things which Abraham, Moses, David, Isaiah, Jeremiah, Ezekiel, Daniel, and many others looked forward to, but did not fully understand in their lifetime!

4.Yet these mysteries of the kingdom of heaven (Matt. 13:11), containing things kept secret from the foundation of the world (Matt. 13:35), are now being made known through the preaching of the gospel of Christ: Now to Him who is able to establish you according to my gospel and the preaching of Jesus Christ, according to the revelation of the mystery kept secret since the world began but now has been made manifest, and by the prophetic Scriptures has been made known to all nations, according to the commandment of the everlasting God, for obedience. Rom. 16:25 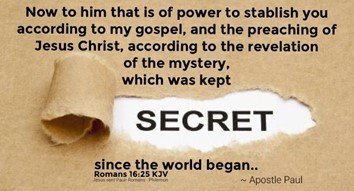 Paul declared much of the mystery and secret in Col. 1:27, …….Christ in you the hope of glory!

Matt. 13: 18-30 “Therefore hear the parable of the sower:19 “When anyone hears the word of the kingdom, and does not understand it, then the wicked one comes and snatches away what was sown in his heart. This is he who received seed by the wayside.20 “But he who received the seed on stony places, this is he who hears the word and immediately receives it with joy;21 “yet he has no root in himself, but endures only for a while. For when tribulation or persecution arises because of the word, immediately he stumbles.22 “Now he who received seed among the thorns is he who hears the word, and the cares of this world and the deceitfulness of riches choke the word, and he becomes unfruitful.23 “But he who received seed on the good ground is he who hears the word and understands it, who indeed bears fruit and produces: some a hundredfold, some sixty, some thirty.”24 Another parable He put forth to them, saying: “The kingdom of heaven is like a man who sowed good seed in his field;25 “but while men slept, his enemy came and sowed tares among the wheat and went his way.26 “But when the grain had sprouted and produced a crop, then the tares also appeared.27 “So the servants of the owner came and said to him, ‘Sir, did you not sow good seed in your field? How then does it have tares?’28 “He said to them, ‘An enemy has done this.’ The servants said to him, ‘Do you want us then to go and gather them up?’29 “But he said, ‘No, lest while you gather up the tares you also uproot the wheat with them.30 ‘Let both grow together until the harvest, and at the time of harvest I will say to the reapers, “First gather together the tares and bind them in bundles to burn them, but gather the wheat into my barn.”
13:18-30 And you hear the parable of the seed. THE PARABLE EXPLAINED All who hear the word of the sovereigndom and understand not, there the evil one comes and seizes the word seeded in his heart — this is that seeded upon the hand of the way. And that seeded upon the rock is he who hears the word and straightway with cheer takes it and not having root within, but for a time: and when there be tribulation or persecution because of the word, he is quickly offended. And that seeded among the thorns is he who hears the word — and the anxieties of this world and the deceit of riches strangle the word: and he is not being fruitful. And that seeded upon the graced earth is he who hears the word and understands: and gives fruit and works — having one hundred and having sixty and having thirty. THE PARABLE OF THE DARNEL AND SEED He parabalizes another parable, wording to them: The sovereigndom of the heavens is like a man that seeds graced seed in his field: and hear with their ears and understand with their heart and they turn and I heal them. And graced — your own eyes that see: and your ears that hear. For Amen! I word to you, That many prophets and just panted to see what you see and saw not: and to hear what you hear and heard not:and you — hear the parable of the seed. and when humanity sleeps his ba’al enemy comes and seeds darnel among the wheat and goes: and when the herbage sprouts and works fruit, then the darnel also manifests: and the servants of the lord of the house approach and word to him, Lord, Behold, seeded you not graced seed in your field? From whence has it darnel? And he words to them, a man — a ba’al enemy works this. And his servants word to him, Will you that we go and gather them? And he words to them, Lest when you gather the darnel you also uproot with the wheat: allow the two to greaten in union until the harvest: and in the time of harvest I word to the harvesters, Gather first the darnel and bind in bundles to burn: and congegrate the wheat into my granary. Aramaic NC 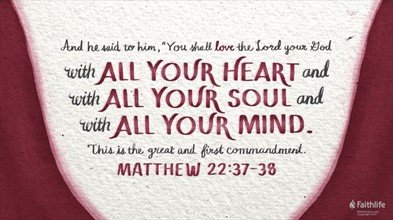 h. When we compare this with The Parable of The Sower, we come up with slightly mixed metaphors…

2. THE TARES – the tares are the sons of the wicked one.
a. Those later defined as they that…
1) Offend.
2) Practice lawlessness – cf. Matt. 13:41.
b. Though within the realm of the Lord’s reign (for the Lord will later gather them out of His kingdom), they clearly are not submitting to the Lord’s authority!
c. Their actions reveal that they are really sons of the wicked one!

3. THE ENEMY – The enemy who sowed them is the devil.
a. Who tried to tempt Christ and failed – cf. Matt. 4:1-11.
b. Who now tries to destroy the efforts to save souls and enlarge the influence of His kingly rule. We know he is defeated. We enforce that defeat! Col. 2:15 He (Jesus) disarmed the rulers and authorities and put them to open shame, by triumphing over them in him.

We are at the end of this age. The good news of the kingdom is being preached; the rule of God is coming forth on earth; and pure hearted sons of God are bringing forth the plan of God on our planet now. The sons of the wicked are being removed from the kingdom of God and cast into fire. (consumed) They will repent (some will) and be purified or continue in the fiery judgment/justice of God. Then, the pure hearted sons of God, bearing His plan, will shine forth on Planet Earth. Note: Judgment is justice that only Yeshua Ha’ Mashiach can bring. Judgment is always restorative. Mercy troim0phs over judgment. James 2:13

Matt.13:31-32 Another parable He put forth to them, saying: “The kingdom of heaven is like a mustard seed, which a man took and sowed in his field,32 “which indeed is the least of all the seeds; but when it is grown it is greater than the herbs and becomes a tree, so that the birds of the air come and nest in its branches.”
13:31-32 HE PARABLE OF THE GRAIN OF MUSTARD SEED He parabalizes another parable, wording to them, Like the sovereigndom of the heavens is a grain of mustard seed which a man takes and seeds in his field — and this is the least of all seeds: and when it greatens it is the greatest of all greens and becomes a tree: as the flyers of the heavens come and nest in the branches. Aramaic NC

A. THE PLANT ITSELF

1. The mustard plant is well known for its hot-flavored seeds.
2. Among seeds sown in a garden it was generally the smallest .
3. As a plant, it reaches ten, sometimes fifteen feet in height.
4. In the fall of the year, its branches have become rigid, and the plant often serves as a shelter for birds of many kinds.

B. PROVERBIAL USES OF THE MUSTARD SEED
1. The mustard seed was used frequently to describe anything that is small in its beginning.
2. Jesus used it on another occasion to describe one’s faith – cf. Matt. 17:20
3. The Koran reads Oh, my son, every matter, though it be of the weight of a grain of mustard seed…

I. BACKGROUND INFORMATION ON LEAVEN

A. WHAT WAS LEAVEN?
1. A small portion of fermented dough used to ferment other dough (Holman Bible Dictionary).
2. Once inserted into a batch, it continues its process of fermentation until the whole batch has risen.
3. Today, we more likely use the term yeast instead of leaven.

B. SYMBOLIC USES OF LEAVEN

1. In the New Testament, leaven is often symbolic of corrupting influence.
a. Jesus warned of the leaven of the Pharisees and the Sadducees, which included their teaching and hypocrisy – cf. Matt. 16:5-12; Luke 12:1
b. Paul wrote of the danger of how a little leaven leavens the whole lump, as he addressed the need to withdraw from the unrepenant brother – 1 Cor. 5:1-13 2. This has led some to conclude that leaven in the parable represents something evil.

2. But there are several reasons why this is not likely true.
a. There is no reason why its use elsewhere must be the same here.
1) A speaker or writer is certainly free to use a figure any way they wish, even differently in different situations.
2) To read the use of the figure as found elsewhere into this passage is a form of eisegesis. Eisegesis is the opposite of exegesis (to draw out) is eisegesis (to draw in), in the sense of an eisegetic commentator importing or drawing in his or her own purely subjective interpretations into the text, unsupported by the text itself.

Exegesis is a critical explanation or interpretation of a text using concordance, literal meanings. It means to draw out, which is the word education, Greek, educare. The word Education comes from the Greek word Edukos, which means To Draw Forth From Within. This would be by Holy Spirit.

b. That is, reading something into the passage not actually there.
1) Though in this case one may not be reading their own preconceived ideas into the passage, as is commonly done.
2) But reading the ideas of another Biblical context into this one is still a form of eisegesis.
b. As opposed to exegesis, which is to read out of a passage what it actually says or means, and should be the goal of proper Bible study.
c. The last phrase would then suggest that it is destined to fail!
1) The leaven is to eventually fill the whole loaf!
2) If leaven represents corrupting influence, how discouraging!
c. The close proximity of the parable to The Parable of The Mustard Seed would suggest similarities in meaning (cf. the two parables in Matt. 13:44-46)

We will continue with Les.5 next week.