I.THE PARABLE EXPLAINED
A. THE DETAILS OF THE PARABLE.
1. A dragnet was cast into the sea.
2. As defined by the Holman Bible Dictionary, a dragnet is…
a. A large fishing net equipped with a weighted bottom edge for touching (dragging) the river or lake bottom and a top with wooden floats allowing the net to be spread across the water (Isa. 19:8).
b. Such nets were normally let down from a boat and then drawn to shore by a crew positioned on the beach. In the case of a large catch the net was hauled to shore by boat (John. 21:6-8).
3. Once the dragnet was drawn to shore, the fish were separated; those good for eating were saved in vessels, the inedible were discarded.

B. THE MEANING OF THE PARABLE.
1. As with The Parable of the Wheat and the Tares, Jesus explains what this parable means – Matt. 13:49-50
a. The church, in its present state, will be a mixture of good and bad, some carnal Christians.
1) Just like a dragnet gathers in both good and bad fish.
2) We saw in The Parable of The Wheat and Tares that this will be due to the influence of satan, such that there will be those that offend, and those who practice lawlessness – cf. Matt. 13:41.
3) Paul wrote that in a great house (i.e., the church) some vessels are for honor and some for dishonor – 2 Tim. 2:20-21.
a. But in the future, there will be a separation – Matt. 13:49.
1) It will occur at the end of the age – cf. Matt. 13:39-40 2) The agents of this separation will be the angels – cf. Matt 13:41
3) The wicked will be separated from the just (i.e., the righteous) – cf. Matt 13:41.
b. The punishment of the wicked is described – Matt. 13:50 1) cast into the furnace of fire – cf. Matt. 13:42a.
1) There will be wailing and gnashing of teeth – cf. Matt. 13:42b.
2. In giving His explanation, we see the emphasis of Jesus in this parable, and the fundamental difference between it and The Parable of The Wheat and The Tares.
c. The emphasis is upon…
1) The future separation ……. Some say the church, some the world or nations.
2) The punishment of the wicked.
d. Unlike the Parable of The Wheat and The Tares…
1) There is nothing in the explanation related to the present mixture – contrast that with Matt. 13:24-30.
2) There is nothing depicting the blessedness of the righteous – contrast that with Matt.13:43.
3) The Parable of The Dragnet, then, reinforces the spiritual truths taught in The Parable of The Wheat And Tares, especially those relating to the coming judgment/justice, the wicked. That Jesus would emphasize the judgment/justice of the wicked in this parable ought to impress upon us that the good news of the kingdom of heaven.

This parable is associated with the Parable of the Sower. 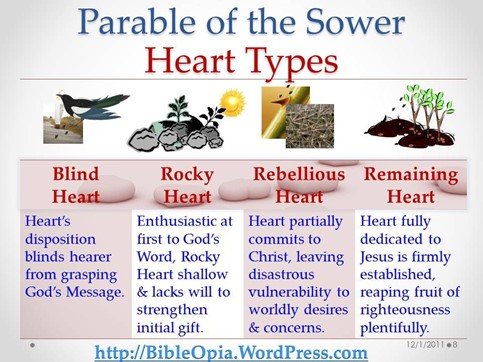 There are different views on this parable. This is strictly the Dispensational View. Others believe the view that the separation will bring about the Bride of Christ, the Elect.

Matt. 13:51-52 Jesus said to them, “Have you understood all these things?” They said to Him, “Yes, Lord.”52 Then He said to them, “Therefore every scribe instructed concerning the kingdom of heaven is like a householder who brings out of his treasure things new and old.”
13:51-52 Yah Shua words to them, Understand you all these? They word to him, Yes, our Lord. THE PARABLE OF THE LORD OF THE HOUSE And he words to them, because of this, every scribe discipled to the sovereigndom of the heavens is like a mana lord of the house who ejects from his treasure new and antiquated. Aramaic NC

I. THE PARABLE ITSELF
A. JESUS IS MAKING A POINT ABOUT A SCRIBE
1. Therefore every scribe instructed about the kingdom of heaven…
2. From the Holman Bible Dictionary, a scribe was a Person trained in writing skills and used to record events and decisions (Jer. 36:26; 1 Chron. 24:6; Esth. 3:12). During the Exile in Babylon educated scribes apparently became the experts in God’s written word, copying, preserving, and teaching it. Ezra was a scribe in this sense of expert in teaching God’s word (Ezra 7:6). A professional group of such scribes developed by New Testament times, most being Pharisees (Mark 2:16). They interpreted the law, taught it to disciples, and were experts in cases where people were accused of breaking the law of Moses. They led in plans to kill Jesus (Luke 19:47) and heard His stern rebuke (Matt. 23).
3. They were more than simply copyists, but students and instructors as well.
4. It would be assumed, therefore, that a scribe would be expected to understand the finer points of the Law of Moses.

B. A SCRIBE INSTRUCTED CONCERING THE KINGDOM OF HEAVEN.
1. Jesus’ point is not about a normal scribe, who would understand only the Law.
2. But a scribe who would be instructed about the kingdom of heaven (via the parables).

C. SUCH A SCRIBE IS LIKE A HOUSEHOLDER.
1. A householder with treasure, something of great value.
2. Treasure that is both new and old.
a. The old treasure would be his understanding of the Law.
b. The new treasure would be his understanding of the kingdom of Heaven. The parable and its explanation” appear simple enough to understand. But there are also implications from the parable that are worthy of careful consideration.

Matt.13:53-58 Now it came to pass, when Jesus had finished these parables, that He departed from there.54 And when He had come to His own country, He taught them in their synagogue, so that they were astonished and said, “Where did this Man get this wisdom and these mighty works?55 “Is this not the carpenter’s son? Is not His mother called Mary? And His brothers James, Joses, Simon, and Judas?56 “And His sisters, are they not all with us? Where then did this Man get all these things?”57 So they were offended at Him. But Jesus said to them, “A prophet is not without honor except in his own country and in his own house.”58 Now He did not do many mighty works there because of their unbelief.
13:53-58 YAH SHUA REJECTED IN HIS FATHERLAND And so be it, when Yah Shua shelems these parables he departs from there and comes to his city and is doctrinating to them in their congegration: so as to amaze them, and they are wording, Whence has this man this wisdom and these powers? Be this not the son of the carpenter? Is not his mother called Maryam? And his brothers, Yaaqub and Yausi and Shimun and Yah Huda? And all his sisters, behold are they not unto us? So whence all this and these? — and they are being offended in him. And Yah Shua words to them, A prophet is has no despisers except in his city and in his house. — and he works not many powers there because they trust not. Aramaic NC 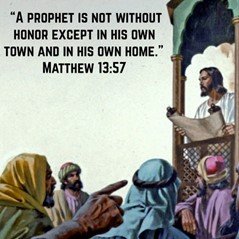 Where did this Man get this wisdom and these might works? Is this not the carpenter’s son? Because these villagers were familiar with Jesus as a boy and accustomed to unspectacular things from him, we may conclude that Jesus must have grown up a very normal boy unlike the fantastic stories told in apocryphal books like. The Infancy of Jesus.
1. Is this not the carpenter’s son? This question was asked out of ignorant prejudice. Yet it can also be asked out of deep appreciation of the fact that the Son of God took such a noble, lowly place.
2. Jesus, the Carpenter, entered upon the ministry, made ploughs, yokes, and so forth. But was not that an honest occupation?
3. It is the very ordinariness of Jesus’ home background that causes the astonishment (cf. John 6:42).
a) This insulting question seems to intimate that our Lord’s family was a very obscure one; and that they were of small repute among their neighbors, except for their piety.
b) People bring the same charge against Jesus today. I see those associated with Him, and they seem lowly or very normal; Jesus must also not be special.
4. Where then did this Man get all these things? Their reception of Jesus was not welcoming or friendly. They speak skeptically and will refer to Him only as this Man.

Verses- (Mat 13:57-58) A prophet without honor.
So, they were offended at Him. But Jesus said to them, A prophet is not without honor except in his own country and in his own house. Now He did not do many mighty works there because of their unbelief.

A. So they were offended at Him: When we think of how strongly Jesus is identified with Nazareth (see at Matthew 2:23), it is even more surprising to note that the people of Nazareth did not appreciate it. The success and glory of Jesus seemed only to make them more resentful towards Him.
B. A prophet is not without honor except in his own country, and in his own house: We often have wrong ideas about what it means to be spiritual. We often think that spiritual people will be much more strange than normal. Therefore, those closest to truly spiritual people see just how normal they are and sometimes think that they aren’t spiritual because they are normal.
D. He did not do many mighty works there because of their unbelief: It is truly remarkable that Jesus was, in some manner, limited by their unbelief. As long as God chooses to work in concert with human agency, developing our ability to partner/co-labor with Him, our unbelief can and may hinder the work of God.

We will continue with Les.5 and Chapter 14 next week.