The Gospel of Matthew – Lesson 4 (Continued)

JESUS’ANSWER TO JOHN THE BAPTIST’S DISCIPLES

2. (Matt. 11:4-6) Jesus’ answer to John the Baptist’s disciples: tell John that prophecy regarding the Messiah is being fulfilled.
Jesus answered and said to them, “Go and tell John the things which you hear and see: The blind see and the lame walk; the lepers are cleansed and the deaf hear; the dead are raised up and the poor have the gospel preached to them. And blessed is he who is not offended because of Me.”

a. Go and tell John the things which you hear and see: Jesus wanted to assure both John and his disciples that He was the Messiah. But He also reminded them that His power would be displayed mostly in humble acts of service, meeting individual needs, and not in spectacular displays of political deliverance.
1). Why is it that, in these days, it is said that the miracles are rather a trial of faith than a support of it?

b. Blessed is he who is not offended because of Me: Jesus knew that the focus of His ministry was offensive to the expectation of the Jewish people, who longed for political deliverance from Roman domination. But there was a blessing for those who were not offended because of the Messiah who came against the expectation of the people.
1). Another Beatitude – The blessedness of the unoffended.

Jesus Himself said: Then He said to the disciples, “It is impossible that no [a]offenses should come, but woe to him through whom they do come!” Luke 17:1

As they departed, Jesus began to say to the multitudes concerning John: “What did you go out into the wilderness to see? A reed shaken by the wind? But what did you go out to see? A man clothed in soft garments? Indeed, those who wear soft clothing are in kings’ houses. But what did you go out to see? A prophet? Yes, I say to you, and more than a prophet. For this is he of whom it is written: ‘Behold, I send My messenger before Your face, who will prepare Your way before You.’ Assuredly, I say to you, among those born of women there has not risen one greater than John the Baptist; but he who is least in the kingdom of heaven is greater than he. And from the days of John the Baptist until now the kingdom of heaven suffers violence, and the violent take it by force. For all the prophets and the law prophesied until John. And if you are willing to receive it, he is Elijah who is to come. He who has ears to hear, let him hear!”

Messiah (the Coming One)?”

a. When Jesus finished commanding His twelve disciples: According to Bruce, to preach in their cities does not refer to the cities of the disciples, but the cities of Galilee. In this way Jesus gave His commissioned disciples room to do their work.

b. He sent two of his disciples: It is also possible – but perhaps less likely – that John did not ask this question for his own sake, but for the sake of his disciples – he wanted them to go to Jesus and ask the question for themselves, causing them to focus their attention on Jesus.

c. John’s arrest was mentioned in Matthew 4:12; the full story of his imprisonment will wait until Matthew 14:3-12.

d. Herod Antipas of Galilee had paid a visit to his brother in Rome. During that visit he seduced his brother’s wife. He came home again, dismissed his own wife, and married the sister-in-law whom he had lured away from her husband. Publicly and sternly John rebuked Herod. It was never safe to rebuke an eastern despot and Herod took his revenge; John was thrown into the dungeons of the fortress of Machaerus in the mountains near the Dead Sea.

e. Are You the Coming One, or do we look for another: John 1:29-36 and other passages indicated that before this, John clearly recognized Jesus as the Messiah.

John 1:29-36 The next day John saw Jesus coming toward him, and said, “Behold! The Lamb of God who takes away the sin of the world! 30 This is He of whom I said, ‘After me comes a Man who [a]is preferred before me, for He was before me.’ 31 I did not know Him; but that He should be revealed to Israel, therefore I came baptizing with water.”32 And John bore witness, saying, I saw the Spirit descending from heaven like a dove, and He remained upon Him. 3 I did not know Him, but He who sent me to baptize with water said to me, Upon whom you see the Spirit descending, and remaining on Him, this is He who baptizes with the Holy Spirit.’ 34 And I have seen and testified that this is the Son of God.”
The First Disciples35 Again, the next day, John stood with two of his disciples. 36 And looking at Jesus as He walked, he said, “Behold the Lamb of God!

Paul states, “Our paschal ( lamb, Christ, has been sacrificed” (1 Corinthians 5:7). The Passover sacrifice, also known as the Paschal lamb or the Passover lamb, is the sacrifice that the Torah mandates the Israelites to ritually slaughter on the evening of Passover and eat on the first night of the holiday with bitter herbs and matzo.

1 Corinthians 5:7, NASB: Clean out the old leaven so that you may be a new lump, just as you are in fact unleavened. For Christ our Passover also has been sacrificed.

The Gospel of John clearly compares Jesus to the Passover lamb by saying that Jesus was crucified the same day that the Passover lambs were being killed in the Temple (John 19:31).
In the Gospel of John it was John the Baptist who gave Jesus the title Lamb of God (John 1:29). The Book of Revelation speaks of the Lamb at least 29 times. In a vision John sees a lamb. Four living creatures and 24 elders fall before the Lamb and sing praise because he purchased all people with his blood (Revelation 5:9).

His present doubt may be explained because perhaps he himself had misunderstood the ministry of the Messiah. Perhaps he thought that if Jesus were really the Messiah, He would perform works connected with a political deliverance of Israel – or at least the deliverance of John, who was in prison.

f. It is possible that John made a mistaken distinction between the Coming One and the Christ, the Messiah. There is some indication that some Jews of that time distinguished between a prophet to come promised by Moses (Deuteronomy 18:15) and the Messiah. The dominant note here is one of confusion; John’s long trial in prison has confused him.

Deuteronomy 18:15 The Lord your God will raise up for you a Prophet like me from your midst, from your brethren. Him you shall hear,

Jesus Christ is the King, Priest and Prophet 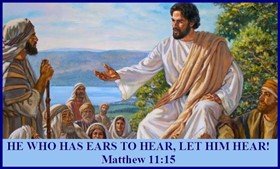 a. A prophet…and more than a prophet: Jesus reminded them that John was God’s chosen herald of the Messiah, not a man-pleaser or a self-pleaser. He was in fact more than a prophet, because he alone had the ministry of serving as the Messiah’s herald. For that, he was the greatest of prophets and the greatest of men (among those born of women there has not risen one greater than John the Baptist).

1). This is he of whom it is written: Matthew noted that this ministry of the Messiah’s herald was prophesied in Isaiah 40:3 and Malachi 3:1.
2). Though some might put John in a bad light because of his seeming doubts regarding Jesus, Jesus Himself spoke quite highly of John. “John had often borne witness to Jesus; now Jesus bears witness of John.”

b. He who is least in the kingdom of heaven is greater than he: Though John was great, he was not born again under the New Covenant. This is because he lived and died before the completion of Jesus’ work at the cross and empty tomb. Therefore, he did not enjoy the benefits of the New Covenant (1 Corinthians 11:25, 2 Corinthians 3:6, Hebrews 8:6-13).
1). As we may say, as a rule, that the darkest day is lighter than the brightest night; so, John, though first of his own order, is behind the last of the new or Gospel order. The least in the Gospel stands on higher ground than the greatest under the law.”

c. The kingdom of heaven suffers violence, and the violent take it by force: Jesus’ reference to violence refers to both the intensity of spiritual warfare surrounding the ministry of Jesus and His herald, and also to the intensity required to persevere in following God and His kingdom.

1). The exact sense of this has been greatly debated and is made more difficult by complicated grammar. Carson probably gives the best sense of both expressions. The kingdom has come with holy power and magnificent energy that has been pushing back the frontiers of darkness. This is especially manifest in Jesus’ miracles and ties in with Jesus’ response to the Baptist…The kingdom is making great strides; now is the time for courageous souls, forceful people, to take hold of it.
2). The kingdom will never be received passively. It is always founded on God’s work on our behalf, but God’s work will always produce a response in us.
3). Frequently complaints are made and expressed by individuals who have never found a blessing rest upon anything they have attempted to do in the service of God. I have been a Sunday-school teacher for years,’ says one, ‘and I have never seen any of my girls or boys converted. No, and the reason most likely is you have never been violent about it; you have never been compelled by the Divine Spirit to make up your mind that converted they should be, and no stone should be left unturned until they were. You have never been brought by the Spirit to such a passion, that you have said, I cannot live unless God bless me as Jacob did. I cannot exist unless I see some of these children accept Jesus. Then, declaring in prayer, and putting forth afterwards your trust with the same intensity towards heaven, you would never have been disappointed, for the violent/passionate take it by force.

1). Under the Old Covenant, every other prophet announced, The Messiah is coming. John alone had the privilege of saying, The Messiah is here.
e. And if you are willing to receive it, he is Elijah who is to come: John may also be seen as Elijah, in a partial fulfillment of Malachi 4:5. John was not actually Elijah, but he served in the same spirit and power of Elijah, thus fulfilling his office (Luke 1:17). Because John was Elijah in this symbolic sense, Jesus added “if you are willing to receive it.”
(1). Elijah did come in fact during Jesus’ ministry, during the transfiguration (Matthew 17:3). But in further fulfillment of the Malachi 4:5 promise, Elijah will come again before the Second Coming of Jesus, likely as one of the two prophets of Revelation 11:3-12.
2). If John the Baptist’s ministry was like that of Elijah, we remember that Elijah became depressed and discouraged also.
3). He who has ears to hear, let him hear! A proverbial form of speech often used by Jesus after important utterances, here for the first time in Matthew. 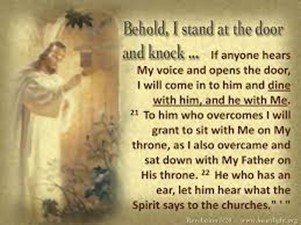 We will continue with Les.4 next week.