THE PARABLE OF THE WANDERING SHEEP What see you? If a human becomes a hundred sheep and one of them wanders, forsakes he not the ninety and nine on the mountain, and goes and seeks that which wanders? And if he finds it, Amen! I word to you, he cheers more therein than of the ninety and nine who wander not. Thus it has not been the will And if your brother sins at you, go and admonish him between you and him only: if he hears you, you gain your brother: and if he hears you not guide one or two more with you: concerning that in the mouth of two or three witnesses you stand every word: and if he hears them not, word it to the congregation: and if he hears not the congregation, he becomes to you as a customs agent and as a heathen.
BINDING AND RELEASING Amen! I word to you, All you bind on earth is being bound in the heavens: and whatever you release on earth is being released in the heavens.
SYMPHONIZING TRUST Again I word to you, That if two of you equalize on earth concerning all they will to ask, so be it to them
from toward my Father in the heavens: for where two or three congregate in my name, there I am among them.

THE PARABLE ON FORGIVENESS Then Kepha approaches him, wording, My Lord, how many times, if my brother offends in me, forgive I him? Until seven times? Yah Shua words to him, I word not to you, Until seven times, but, Until seven times seventy. Because of this the sovereigndom of the heavens is likened to a man — a sovereign, who wills to take reckoning from his servants: and when he begins to take: in front of your Father in the heavens, that one of these little ones destruct.

A SINNING BROTHER they approach him with one debtor of a myriad talent weights. and when having naught to reward, his Lord misvahs to merchandise him and his woman and his sons and all — whatever he has, and to reward. And the servant falls and worships him, wording, My Lord, be patient of spirit concerning me and I reward you all. And he befriends him — the Lord of that servant, and releases him and forgives his debt. And that servant goes and finds one of his comrads being indebted one hundred dinari: and he is taking him and strangling him, wording to him, Give me whatever you are indebted to me. And his comrade falls upon his feet,and seeks of him, wording to him, Be patient of spirit with me and I reward all to you. And he wills not: but goes and casts him into the guardhouse until he gives whatever he is indebted. And when his comrades see what became, they sorrow greatly, and come and tell their Lord all that became. Then his Lord calls him, and words to him, — to that evil servant, I forgave you all that debt you sought of me: Needed you not also to be mercying your comrade as I mercied you? — and his Lord angers and shelems him to the torturers until he rewards all he is indebted to him. Thus my Father in the heavenlies work to you, unless you humans forgive your brother his offences from your hearts. Aramaic NC

THE PARABLE AND ITS MESSAGE

A.THE OCCASION WHICH LED TO ITS TELLING
1. Peter’s question about forgiving a brother – Matt. 18:21.
a. He probably thought he was being very gracious.
b. For many Jewish rabbis taught that three (3) times was sufficient.

2. Jesus’ initial response – Matt. 18:22
a. His answer is not to be taken literally, but is an infinite number.
b. Rather, Jesus confronts Peter with the truth that the spirit of forgiveness really knows no boundaries. (Believers’ Study Bible)

3. To reinforce His point, Jesus proceeds to tell the parable.

b. The mercy of the king goes beyond the actual request.
1) The request was for patience to pay the debt.
2) Yet the king was willing to forgive the debt entirely!

2. That servant in turn then refuses to cancel a fellow servant’s petty debt – Matt. 18:28-30
a. How much was a hundred denarii?
1) Remember, a denarii was equivalent to a day’s wage.
2) Using the same rate above ($50/day), the amount would be $5000.
b. The unmerciful servant refuses to heed the same plea made earlier by himself.

3. The final result: Upon this cruel servant the king imposes the former sentence, even adding to it! – Matt. 18:31-34
a. Before, he, his family, and his possessions were only going to be sold.
b. But now, he is to handed over to the torturers.

C. THE LESSON OF THE PARABLE
1. As stated by Jesus Himself – Matt. 18:35
a. So My heavenly Father also will do to you if each of you, from his heart, does not forgive his brother his trespasses.
b. Here the Word is talking about offenses that we take on om other, a form of unforgiveness.

2. Prompted by gratitude the forgiven one must always learn to forgive whoever has trespassed or offended him.
a. Hinders your prayers or what you receive from God if you don’t. Mark 11:25 This is what is meant by this passage. Our sins have been forgiven past, present and future. 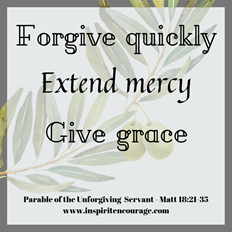 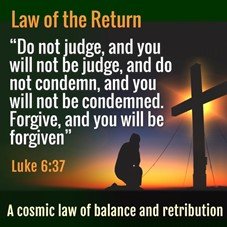 Matt. 18:34,35; cf. Rom. 1:31 [Perhaps the most important point we learn from this parable is that the kingdom of heaven is to consist of people who are both forgiven and forgiving, who have both received mercy and are merciful. – cf. James 2:13