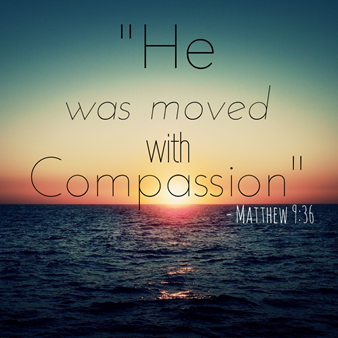 Matt. 14: 14-22 And when Jesus went out He saw a great multitude; and He was moved with compassion for them, and healed their sick.15 When it was evening, His disciples came to Him, saying, “This is a deserted place, and the hour is already late. Send the multitudes away, that they may go into the villages and buy themselves food.”16 But Jesus said to them, “They do not need to go away. You give them something to eat.”17 And they said to Him, “We have here only five loaves and two fish.”18 He said, “Bring them here to Me.”19 Then He commanded the multitudes to sit down on the grass. And He took the five loaves and the two fish, and looking up to heaven, He blessed and broke and gave the loaves to the disciples; and the disciples gave to the multitudes.20 So they all ate and were filled, and they took up twelve baskets full of the fragments that remained.21 Now those who had eaten were about five thousand men, besides women and children.

14:14-21 and Yah Shua goes and sees a vast congregation and befriends over them and he heals their sick. Immediately Jesus made His disciples get into the boat and go before Him to the other side, while He sent the multitudes away.

YAH SHUA FEEDS FIVE THOUSAND And when, being evening, his disciples approach to, wording to him, This is a place of desolation and the season passes: release the congregation of humanity to go to the villages and merchandise themselves nourishment. And he words to them, Seek not that they depart: you give them to eat. And they word to him, We having naught there but five loaves and two fish. And Yah Shua words to them, Bring them here to me. — and he misvahs the congegration to repose upon the earth — and takes he the five breads and the two fish: and looks to the heavens and eulogizes and crumbles and gives to his disciples — and the disciples placed to the congregation: And they all eat, and satiate: and they take the remainder of the crumbs — twelve baskets when filled: and those humans, those who had been eating, have been about five thousand besides of women and lads. And when he urges his disciples to ascend into the sailer and go across in front of him while he releases the congregation: Aramaic NC 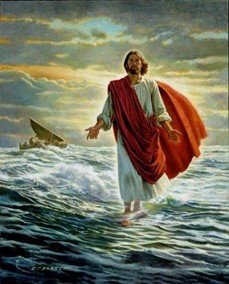 C. Jesus walks on the water and comforts His disciples.
1. (verses 22-24) Another storm on the Sea of Galilee.
a. Immediately Jesus made His disciples get into the boat: Jesus felt it was important for He and His followers to leave the area quickly. Perhaps this was to avoid the multitudes clinging to Him as a potential source of constant bread. Therefore, Jesus compelled (made) the disciples get into the boat.

2). John 6:14-15 tells us that the crowd responded to the miraculous feeding with a rush of messianic expectation. If the disciples shared this enthusiasm – perhaps sensing that now was the time to openly promote Jesus as Messiah, the King – then it was more important than ever for Jesus to get the disciples away from the excited crowd.
b. He went up on the mountain by Himself to pray. Jesus was jealous for time spent alone with His Father. In the midst of His great ministry to others, He did not – He could not – neglect prayer.
c. The boat was now in the middle of the sea, tossed by the waves, for the wind was contrary: The Sea of Galilee is well known for its sudden storms, and during this storm Jesus wasn’t in the boat with the disciples.

2. Verses 25-27- Jesus comes to both help and comfort His disciples.
a. In the fourth watch of the night: This was somewhere between 3 a.m. and 6 a.m. According to Mark (Mark 6:47-52), Jesus came to the disciples when the boat was in the middle of the sea and after they had exhausted themselves rowing against the waves and windy storm.
b. Jesus went to them, walking on the sea: This walk on the water must have been quite a shock to the disciples; they were indeed troubled and they cried out for fear.
c. Be of good cheer! It is I; do not be afraid: Jesus didn’t come to the disciples to trouble them or make them afraid. Therefore, He immediately spoke to them these comforting words.
1). There are two good reasons to put away fear. One reason may be that the problem is not nearly as bad as one had thought; perhaps you are afraid because you exaggerate the danger. The other reason is that even though the problem may be real, there is an even greater solution and help at hand.

We dwell in the secret place of the Most High and there is nothing to fear!

Verses 28-36
3. (verses 28-33) Peter’s bold move and subsequent lack of faith.
a. Lord, if it is You, command me to come to You on the water: We have no idea what prompted Peter to ask such a question, but his faith in Jesus was remarkable. He really responded to Jesus’ invitation and got out of the boat.
b. He walked on the water to go to Jesus. But when he saw that the wind was boisterous, he was afraid; and beginning to sink: This is a wonderful picture of walking in faith, showing that Peter was able to do the miraculous as long as he looked to Jesus. When he saw that the wind was boisterous, he was troubled by fear and began to sink.
c. Beginning to sink he cried out, saying, “Lord, save me”: Even when Peter failed, Jesus was there to save him. Peter knew who to call out to at the moment of crisis. Jesus then brought Peter back to the boat.
d. O you of little faith: Once Jesus rescued Peter, He spoke to Peter about his little faith. This little faith led to the doubt and distraction that made Peter sink under the wind and the waves. In actuality Peter didn’t use the faith of God which was in Him.

Fear is the opposite of faith. Fear is also a lack of Love.
Fearless Love (1 John 4:18)

There is no fear in love. But perfect love drives out fear, because fear has to do with punishment. The one who fears is not made perfect in love. (NIV)

1. The Protection of Perfect Love (there is no fear) This gives us security and when we have perfect love we will make other people
feel secure around us.

2. The Power of Perfect Love (drives out all fear.  This enables us to change and experience freedom from fear and all its forms.

3. The Potential of Perfect Love (being made complete in love)-living without condemnation

A feeling of rejection is perpetuated by not knowing that you are accepted in the Beloved.

You have already been judged in Christ Jesus! Judged holy and righteous!

-living free from fear of man

We all must go through this: We are inoculated against the praise of man, the Lord then baptizes me in the criticism of man, until I die to the control of man. Fear is control and torment.

-living freely in a love that totally accepts you, forgives you, and restores you.

4. The Problem of Imperfect Love (the one who fears…)

When we are not living in the knowledge of God’s true love for us, we cause other people to become enslaved through what we teach about God.

Peter here shows us the weakness of little faith. As said: Certainly this was in his soulish realm because he had the faith of God. When Peter was restored after the resurrection Jesus said to him:

Jesus asked Peter three times, “Do you love me?” as recorded in (John 21:15). This occurred when Jesus was having breakfast with His disciples soon after His resurrection. Jesus used this opportunity to encourage and exhort Peter about his upcoming responsibilities and even to prophesy the manner in which Peter will die. By asking Peter, “Do you love me?” three times, Jesus was emphasizing the importance of Peter’s love and unswerving obedience to his Lord as necessary for his future ministry.

Those who were in the boat came and worshiped Him: They moved quickly from fearing the storm to worshipping Jesus. This was a logical reaction considering the power Jesus showed in walking on the water, and the love He showed in taking care of a sinking Peter.

4. (34-36) Multitudes are healed as they touch Jesus.
a. When they had crossed over, they came to the land of Gennesaret: The Gospel of John tells us that this crossing over was miraculous. As Jesus got into the boat with them, miraculously the boat was instantly carried over to the other side (John 6:21).

b. They begged Him that they might only touch the hem of His garment: Even the hem of Jesus’ garment provides an important point of contact for their faith. Like Paul’s sweatbands (Acts 19:11-12) and Peter’s shadow (Acts 5:15), Jesus’ hem provided a physical object that helped them to believe God for healing at that moment.

They made a demand on the priestly garment- bells- gifts of the Spirit and pomegranates- fruit of the Spirit- Love.

We will continue with Chapter 15 and Lesson 5 next week.