The Gospel According to Matthew Introduction

By Becca CardSeptember 17, 2020Equipping the Saints 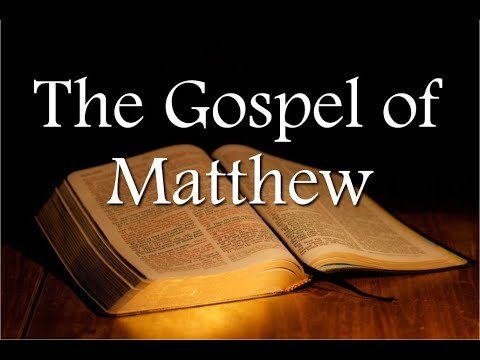 The word ‘gospel’ means good news. There are four gospel accounts in the New Testament: Matthew, Mark, Luke and John.

The first three gospels are sometimes called the ‘synoptic’ (same view) gospels. This is because they each cover teaching and miracles by Jesus that are also covered in another account. John, writing later, recounts Jesus’ other words and miracles that have a particular spiritual meaning.

All four gospels present Jesus as both the Son of God and Son of Man, Humanity. They all record His baptism, the feeding of the 5,000 from five loaves and two fishes, Mary’s anointing of the Lord Jesus, His prayer in the garden of Gethsemane, His betrayal, trial, crucifixion, death, burial and resurrection. However, each writer does so in a slightly different way, recording additional details or emphasizing one aspect more than the others.

Matthew was one of the first twelve disciples of Jesus (Matthew 9:1; 10:1-4) and therefore an eyewitness; he records more of Jesus’ teaching concerning God’s heavenly kingdom than the other writers, for example the entire Sermon on the Mount.

In the New Testament Matthew is arranged as the first book. However, many scholars feel that it was not the oldest book, but junior to Mark. As the other gospels, its authorship is questioned. The gospel is assumed to be written around 80 A.D. in Palestine or Syria.

Matthew writes his gospel account to give us the view of Jesus as the King:
Jesus is introduced as the ‘son of David’ (Matthew 1:1); David had been Israel’s king 1,000 years before Jesus was born.
Jesus’ message is “Repent (change your mind), for the kingdom of heaven is at hand” (Matthew 4:17).
When Jesus teaches concerning the law (Matthew 5:17), He assumes the position of God the King, raising the standards of the law and applying it not merely to outward conduct, but to the inward heart (Matthew 5:19,21-22,27-28,43-44).

Jesus shows His authority as King over physical diseases and sickness, psychological and spiritual oppression and even the wind and the waves of God’s creation (e.g. Matthew 4:24; 8:1-17, 23-27).
Matthew records Jesus’ authority in calling the disciples: “Follow me” (Matthew 4:19). This is how Matthew himself became one of the twelve disciples of Jesus. Matthew had formerly been a tax collector, a Jew working for the Roman government, probably dishonest and despised. He briefly gives his own account of how he became a follower of Jesus in Matthew 9:9-13.

Matthew records more than any of the others about Jesus’ teaching concerning God’s kingdom and heavenly rule:

chapters 5-7 show us the constitution of God’s heavenly kingdom,
chapter 13 shows the appearance of the kingdom at various stages
chapters 24-25 show us the reality of the kingdom, its conflicts, its future, and the need to prepare and be watchful for the return of the King.

Matthew records Jesus declaring: He is “greater than Solomon” (Matthew 12:42). Solomon was the son of David. When king David died, Solomon became king. Under king Solomon “the kingdom was established” in peace (I Kings 2:12,45-46; I Chronicles 22:9). “Solomon sat on the throne of the Lord as king” (I Chronicles 19:23) and “built a temple for the name of the Lord” (II Chronicles 2:1). For Jesus to be greater than Solomon He would have to ascend the throne of God and build the house of God, with all His enemies no longer making trouble. Matthew records Jesus the King saying to His disciples “I will build My church and the gates of Hades shall not prevail against it” (Matthew 16:18); later, having ascertained that the Messiah is a Son, the Son of David, Jesus shows that even king David calls the Messiah “Lord” (Psalm 110:1 and Matthew 22:41-45). Jesus is therefore the King of kings.

Privately, Jesus warns the disciples three times that not everything will happen the way they expect: “the Son of Man will be betrayed; they will kill Him, and the third day He will be raised up” (Matthew 17:22-23).

Matthew records Jesus entering into Jerusalem, riding on a donkey, to cries of “Hosanna to the Son of David”, in direct animated fulfilment of Zechariah’s prophecy regarding the King of Zion, who will establish peace and whose kingdom will extend to the ends of the earth (Zechariah 9:9-10).

Just when it looks to the crowd as though Jesus will prove He is the Messiah by overthrowing the Roman government of Israel, the King is arrested, betrayed by a friend. Even in His arrest, Jesus reminds them He is King “I could pray to My Father, and He will provide Me with more than twelve legions of angels” (Matthew 26:53). Instead, as the meek and lowly King, He is judged by earthly rulers (first the Jewish Sanhedrin and then the Roman governor), mocked, scourged and crucified as the King of the Jews (Matthew 27:26-37).

It appears to go quiet after all the rhetoric. Though He is dead, Matthew records the earthly rulers are still not sure about the King of the Jews, because of the possibility of resurrection, so they seal (with wax) the stone covering the tomb entry and place guards over it (Matthew 27:62-66).

Well they might fear, for nothing, not even the power of death or the gates of Hades can hold the King. He rises on the third day, just as He said, and appears to the disciples. Finally, Jesus meets the disciples at the appointed mountain and declares to them: “All authority in heaven and on earth is given to Me. Go, therefore and make disciples of all nations, baptizing them, and teaching them to obey all that I have commanded you” (Matthew 28:18-20).

We will continue with Les 1 -Introduction to the book of Matthew.