The Glory Of Yahweh Shines Down

Risa’s nephew, Derek, was at the September 24th a rally in North Carolina, where President Trump was speaking. He took two of following pictures, which swept my breath away. Risa lives here in Tennessee and has been on the Firestorm leadership team for many years, so I do not doubt the authenticity of these pictures. Everyone seems to be looking for a prophetic word, a sign, a blast or the Rapture. Well, here is what I believe is one of those supernatural signs, for those who have eyes to see. 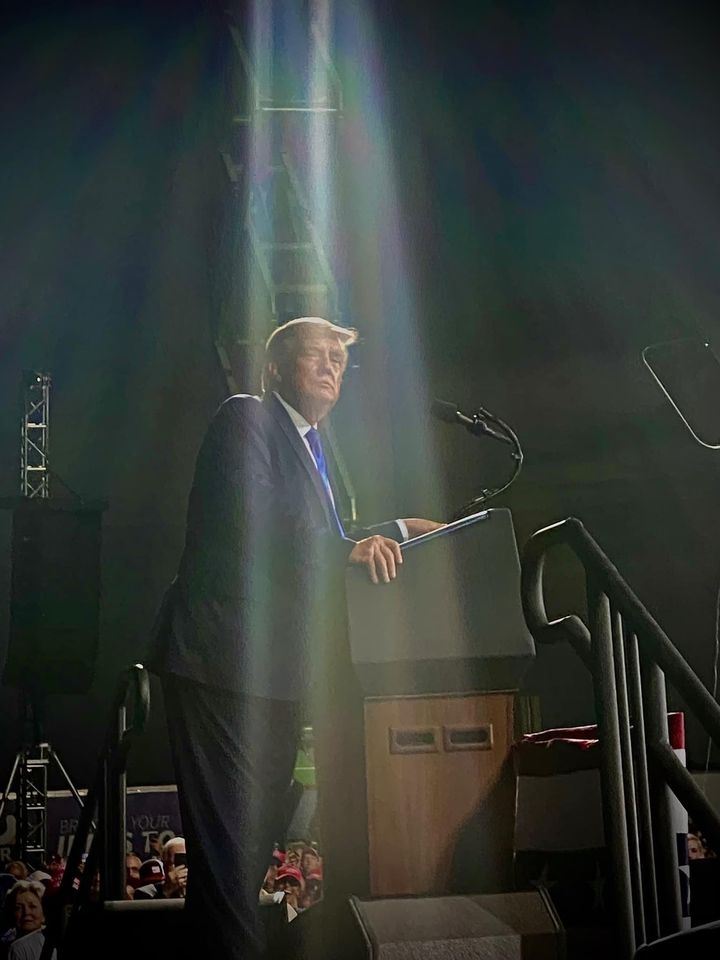 We all know the camera captures things the natural eye cannot see. This is one of those times. And before you say this photo was photo shopped or it was light in the building, take a look at this picture. This is an outdoor rally and there are no big lighting stands hanging over our President, except for the light coming down from heaven, focused exclusively on him. 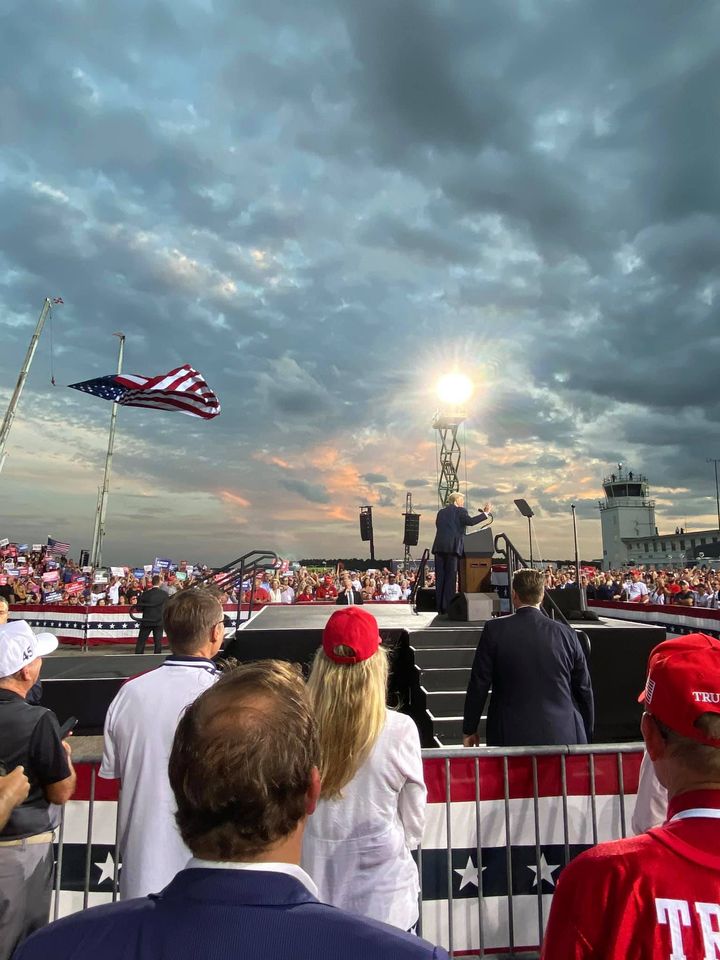 Look not to personalities in this election, look to the platform backing up the Word of Yahweh. Our Nation hinges, once again on the wisdom and tenacity of the Body of Christ – The Church. Rise and go forth and put your hand on the ballot button and PUSH to cast your vote.

Not voting is a vote for the opposing candidate, where you join in to endorse the celebration and legal right for abortion at any age, anytime even at birth, open borders, tax increases, free social security, no freedom of speech, the removal of the right to bear arms, free college, healthcare and more. What is Free to some, makes me wonder, who are those who Pay? I believe it means – you and me.

On top of all that stuff, there is something else possible and it lays heavy on my soul. I say this with great trembling, but the precipice we are standing on could well be the beginning of the silencing and removal of the Church of Jesus Christ. Are you ready for that? I’m not!

I pray you will listen carefully for the Voice of God in the midst of the roar from the world. For me, I declare and I prophesy, “No weapon formed against me or the United States of America and/or her people shall prosper. For I am here, on the wall, declaring the rebirth of the greatest promises Yahweh has ever given anyone, the gift this Nation, the freedoms in our Constitution, the Bill of Rights and the gift of salvation and eternal life through Jesus, The Christ, as written in the Bible.

What are you standing on, declaring and prophesying?

“If it is disagreeable in your sight to serve the Lord, choose for yourselves today whom you will serve: whether the gods which your fathers served which were beyond the River, or the gods of the Amorites in whose land you are living; but as for me and my house, we will serve the Lord.” Joshua 24:15

THE UNITED STATES BILL OF RIGHTS:
FIRST 10 AMENDMENTS TO THE CONSTITUTION

Congress of the United States begun and held at the City of New-York, on Wednesday the fourth of March, one thousand seven hundred and eighty nine.

THE Conventions of a number of the States, having at the time of their adopting the Constitution, expressed a desire, in order to prevent misconstruction or abuse of its powers, that further declaratory and restrictive clauses should be added: And as extending the ground of public confidence in the Government, will best ensure the beneficent ends of its institution.

RESOLVED by the Senate and House of Representatives of the United States of America, in Congress assembled, two thirds of both Houses concurring, that the following Articles be proposed to the Legislatures of the several States, as amendments to the Constitution of the United States, all, or any of which Articles, when ratified by three fourths of the said Legislatures, to be valid to all intents and purposes, as part of the said Constitution; viz.

ARTICLES in addition to, and Amendment of the Constitution of the United States of America, proposed by Congress, and ratified by the Legislatures of the several States, pursuant to the fifth Article of the original Constitution.
First Amendment

Congress shall make no law respecting an establishment of religion, or prohibiting the free exercise thereof; or abridging the freedom of speech, or of the press, or the right of the people peaceably to assemble, and to petition the Government for a redress of grievances.

A well regulated Militia, being necessary to the security of a free State, the right of the people to keep and bear Arms, shall not be infringed.

No Soldier shall, in time of peace be quartered in any house, without the consent of the Owner; nor in time of war, but in a manner to be prescribed by law.

The right of the people to be secure in their persons, houses, papers, and effects, against unreasonable searches and seizures, shall not be violated, and no Warrants shall issue, but upon probable cause, supported by Oath or affirmation, and particularly describing the place to be searched, and the persons or things to be seized.

No person shall be held to answer for a capital, or otherwise infamous crime, unless on a presentment or indictment of a Grand Jury, except in cases arising in the land or naval forces, or in the Militia, when in actual service in time of War or public danger; nor shall any person be subject for the same offence to be twice put in jeopardy of life or limb; nor shall be compelled in any criminal case to be a witness against himself; nor be deprived of life, liberty, or property, without due process of law; nor shall private property be taken for public use without just compensation.

In all criminal prosecutions, the accused shall enjoy the right to a speedy and public trial, by an impartial jury of the State and district wherein the crime shall have been committed; which district shall have been previously ascertained by law, and to be informed of the nature and cause of the accusation; to be confronted with the witnesses against him; to have compulsory process for obtaining witnesses in his favor; and to have the assistance of counsel for his defense.

In Suits at common law, where the value in controversy shall exceed twenty dollars, the right of trial by jury shall be preserved, and no fact tried by a jury shall be otherwise reexamined in any Court of the United States, than according to the rules of common law.

Excessive bail shall not be required, nor excessive fines imposed, nor cruel and unusual punishments inflicted.

The enumeration in the Constitution of certain rights shall not be construed to deny or disparage others retained by the people.

Tenth Amendment
The powers not delegated to the United States by the Constitution, nor prohibited by it to the States, are reserved to the States respectively, or to the people.

THE UNITED STATES CONSTITUTION: THE 11TH AND FOLLOWING AMENDMENTS

THE CONSTITUTION OF THE UNITED STATES OF AMERICA 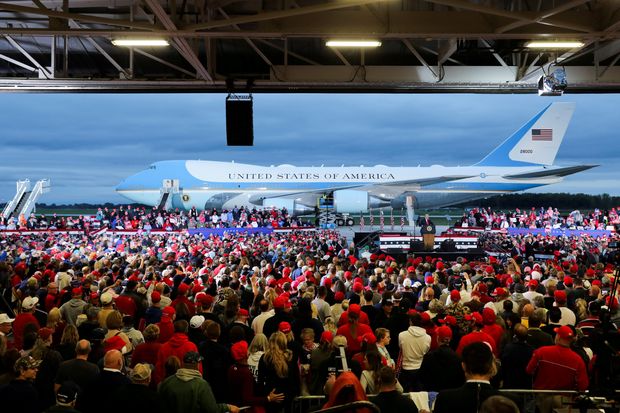