The Flag of the USA & Dorian

By Becca CardSeptember 7, 2019Equipping the Saints

The Flag of the United States of America & Dorian 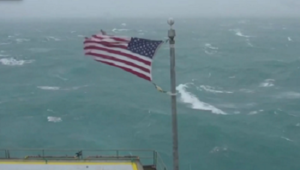 BUT, it is still standing and blowing in the storm

Conversations online talk about the lack of respect to our flag being left out in the weather, as the winds of Dorian pound the against it, however our flag was meant to be flown wherever and whenever, we are in a war and Dorian declared war on the US east coast.  Many times our flag has been torn and tattered, but she was always there with us in the midst of the battle and in the midst of our celebrations. 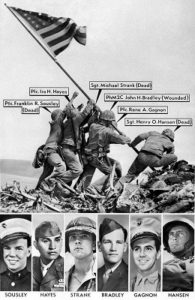 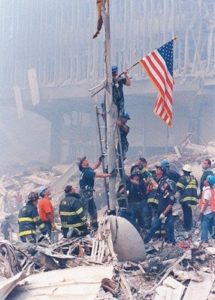 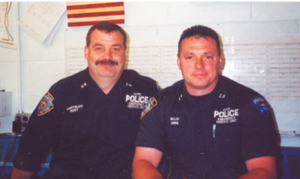 Rich Miller (right) and Richie Hartigan one year after the attacks of September 11. Miller and Hartigan raised the first flag at Ground Zero for their fallen comrades. Two days later there were hundreds of American flags flying at the place where the World Trade Center buildings stood. That proud symbol gave hope to Americans everywhere that we were strong and we would survive.

In the United States today many have never been taught the true meaning of American symbols like the Flag and what they represent.  Our Flag represents, not only our land, but everyone of our states and their people, who come together as Americans, to form one nation, under God, indivisible with liberty and justice for all. That’s who we are – ONE NATION.

To me, our flag still standing as this storm attacks our east coast, represents the spirit over this Nation of hope and trust in their God.  Already, how do you explain a storm who has been unpredictable in every way, causing experienced weathermen to speculate on data, but reduced to waiting to see, hour by hour and day by day, what this double eyed storm might do next, unless you understand a God who hears and answers the prayers of His People.

Who but Yahweh could have reduced the power of this storm called Dorian against all odds and protected the east coast of the US from the devastation we are seeing in the Bahamas with 30 fatalities and more to come?

In our society today people are quick to defame our history, disrepect our flag and reject the reality of a Christian God named Yahweh to be LORD over this nation. Everything is terrible and evil about America, but if we are so terrible how is it possible under the banner of the Stars and Stripes in 2017 the United States gave 46 Billion dollars to foreign countries all around the world. The United States has an arm which reaches out all over the world to help people in need and those who are being so disrespectful of our heritage and society today, have no clue about how much good America has done in the past and continues to do today.

In the midst of struggles and battles from our past and present, our flag was and continues to represent our nation. It is the symbol of who we are as Americans. Until you leave this nation and go experience another country, just pick one – any of them, you will not truly understand how special the United States of America IS.  If you travel outside of the US and get into some kind of trouble, it would be wise to run to the American Embassy for safety and help and by the way, that would be the building, which flies the American Flag – high enough for all to see. For instance.

American Embassy’s What Do You See

What Symbol Identifies The United States? 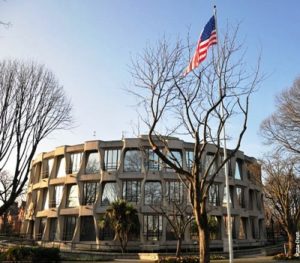 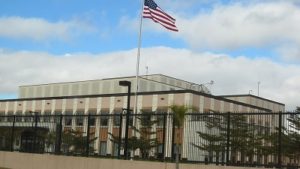 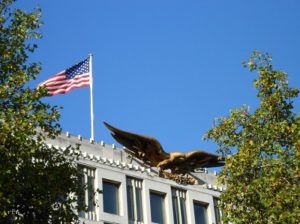 Our flag is honored all over the world for freedom and safety and we should honor it here too.  It represents all of us.  Our nation was founded on being free and built upon the principles in the Bible and the Word of God. Has anyone read the Declaration of Independence lately? It appears Yahweh God had a lot to do with this document in making sure we were guaranteed “our” rights in this new nation.  There are many reasons revealed in this document, regarding why our National Motto on our money and on our buildings reads:  In God We Trust!

Last but not least.  One more picture of the flag off Cape Fear, still standing, Friday after Dorian touched a part of our North Carolina Coastline. 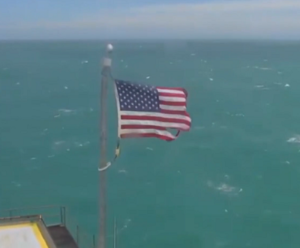 As the reports and pictures come forth on the weather channel and tv stations all over the world, regarding the terrible effects Dorian had upon the Bahama’s, I am ever thankful for all of you who prayed and warred against Dorian.  There is no doubt Yahweh honored us and has kept His Hand upon this Nation.  Though we did get hit with rain, floods and some destruction, it is nothing compared to what might have happened from Florida, all the way up our east coast.  As I look upon the effect of Dorian on the Bahama’s, I find myself on my knees to Yahweh in thanksgiving and gratitude for His Kindness, Mercy and Protection.  Most of all, I just thank Him for creating this nation and letting me be a part of it.

I am proud to be an American and I am proud of our government officials who were the first responders to run to the aid of the people in the Bahamas. Two of our highly experienced generals, top of the line engineers and workers in all fields, have already been working to rebuild the airport and bring much needed supplies to the people. On the ground specialists, medical professionals and morticians are there helping to embalm the bodies of those who have lost their lives, as there are no buildings to house the bodies.

One American citizen sent 100 generators and supplies costing over $49,000 and requested his name to be anonymous. He just wanted to help those people in need.   Supplies are rolling in as best they can considering the airport is down. It is awesome how Americans will always find a way to help those in need, by land, by air, by the SEA and even through impossible situations. Remember, Yahweh is the God of the impossible and nothing is too hard for Him or His people when we are all together in unity and one accord. Jeremiah 32:17

One of the Bahama representatives in charge said, “It is no surprise to us, The United States was the first country, to immediately come to our aid and is now working closely with us.”   I also know the prayers of our nation have been going up to Yahweh to gird up those left helpless and needy in the Bahamas. We are co-laboring with Christ on the land, in the air and by the sea – spiritually and physically. Hallelujah!!!

We are seeing the American people come together under the  Flag of the United States and under that banner, we are endowed, by our Creator, to have a God Given strength and resilience and rise above any circumstances, which have been conjured up and sent to harm us and turn them, into victory testimonies of love and compassion, for each other and those we are helping.

May Yahweh continue to touch our hearts and help those, not only in the Bahama’s and across the world, but at the same time, not forgetting – American’s need to help American’s here in the US as well, in the Name of Yahshua, I pray and I thank You Yahweh.