THE BOOK OF COLOSSIANS 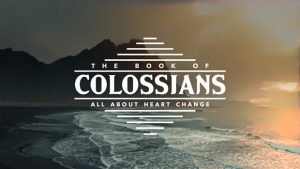 Colossians is named for the city of Colosse, where the church it was addressed to was located. It was also to be read in the neighboring church at Laodicea (4:16).

Author and Date–Paul is identified as author at the beginning (1:1; cf. v. 23; 4:18), as customarily in his epistles. The testimony of the early church, including such key figures as Irenaeus, Clement of Alexandria, Tertullian, Origen, and Eusebius, confirms that the opening claim is genuine. Additional evidence for Paul’s authorship comes from the book’s close parallels with Philemon, which is universally accepted as having been written by Paul. Both were written (ca. A.D. 60–62) while Paul was a prisoner in Rome (4:3, 10, 18; Philem. 9, 10, 13, 23); plus the names of the same people (e.g., Timothy, Aristarchus, Archippus, Mark, Epaphras, Luke, Onesimus, and Demas) appear in both epistles, showing that both were written by the same author at about the same time.

Background and Setting–Colosse was a city in Phrygia, in the Roman province of Asia (part of modern Turkey), about 100 mi. E of Ephesus in the region of the 7 churches of Rev. 1–3. The city lay alongside the Lycus River, not far from where it flowed into the Maender River. The Lycus Valley narrowed at Colosse to a width of about two mi., and Mt. Cadmus rose 8,000 feet above the city.

Colosse was a thriving city in the fifth century B.C. when the Persian king Xerxes (Ahasuerus, cf. Esth. 1:1) marched through the region. Black wool and dyes (made from the nearby chalk deposits) were important products. In addition, the city was situated at the junction of the main north-south and east-west trade routes. By Paul’s day, however, the main road had been rerouted through nearby Laodicea, thus bypassing Colosse and leading to its decline and the rise of the neighboring cities of Laodicea and Hierapolis.

Although Colosse’s population was mainly Gentile, there was a large Jewish settlement dating from the days of Antiochus the Great (223–187 B.C.). Colosse’s mixed population of Jews and Gentiles manifested itself both in the composition of the church and in the heresy that plagued it, which contained elements of both Jewish legalism and pagan mysticism.

The church at Colosse began during Paul’s 3-year ministry at Ephesus (Acts 19). Its founder was not Paul, who had never been there (2:1); but Epaphras (1:5–7), who apparently was saved during a visit to Ephesus, then likely started the church in Colosse when he returned home. Several years after the Colossian church was founded, a dangerous heresy arose to threaten it—one not identified with any particular historical system. It contained elements of what later became known as Gnosticism: that God is good, but matter is evil, that Jesus Christ was merely one of a series of emanations descending from God and being less than God (a belief that led them to deny His true humanity), and that a secret, higher knowledge above Scripture was necessary for enlightenment and salvation. The Colossian heresy also embraced aspects of Jewish legalism, e.g., the necessity of circumcision for salvation, observance of the ceremonial rituals of the OT law (dietary laws, festivals, Sabbaths), and rigid asceticism. It also called for the worship of angels and mystical experience. Epaphras was so concerned about this heresy that he made the long journey from Colosse to Rome (4:12, 13), where Paul was a prisoner.

This letter was written from prison in Rome (Acts 28:16–31) sometime between A.D. 60–62 and is, therefore, referred to as a Prison Epistle (along with Ephesians, Philippians, and Philemon). It may have been composed almost contemporaneously with Ephesians and initially sent with that epistle and Philemon by Tychicus (Eph. 6:21, 22; Col. 4:7, 8). See Introduction to Philippians: Author and Date for a discussion of the city from which Paul wrote. He wrote this letter to warn the Colossians against the heresy they faced, and sent the letter to them with Tychicus, who was accompanying the runaway slave Onesimus back to his master, Philemon, a member of the Colossian church (4:7–9; see Introduction to Philemon: Background and Setting). Epaphras remained behind in Rome (cf. Philem. 23), perhaps to receive further instruction from Paul.

Those cults that deny Christ’s deity have seized upon the description of Him as “the firstborn over all creation” (1:15) as proof that He was a created being. Paul’s statement that believers will be “holy, and blameless, and above reproach” if they “continue in the faith” (1:22, 23) has led some to teach that believers can lose their salvation. Some have argued for the existence of purgatory based on Paul’s statement, “I … fill up in my flesh what is lacking in the afflictions of Christ” (1:24), while others see support for baptismal regeneration (2:12). The identity of the “epistle from Laodicea” (4:16) has also prompted much discussion.

In this marvelous work, Paul continues to eloquently celebrate the perfection of God’s work in Christ in redeeming his likeness in us. His aim is to make the mystery of the gospel known in its most accurate context; the unveiling of Christ in us completes our every expectation. Paul sees the whole world as his audience! He has no other agenda but to reveal Christ in the nations! Col 1:28 This is the essence and focus of our message; we awaken every person’s mind, instructing every individual by bringing them into full understanding (flawless clarity) in order that we may prove (present) everyone perfect in Christ. Col 1:15 In him the image and likeness of God is made visible in human life; in order that every one may recognize their true origin in him; he is the firstborn of every creature. (What darkness veiled from us he unveiled. In him we clearly see the mirror reflection of our original life. The son of his love gives accurate evidence of his image in human form. God can never again be invisible!) Col 2:9-10 Christ reveals that there is no place in the universe where God would rather be; his fullness physically resides in Christ! Jesus proves that human life is tailor-made for God! Jesus Christ mirrors our completeness; he is I am in us. Any teaching that leaves you with a sense of lack and imperfection rather than completeness is a distraction from the truth. Col 2:16 Do not let anyone therefore bring a restriction to your freedom by reviving religious rules and regulations pertaining to eating and drinking; all Jewish festivals, new moons, and Sabbaths have come to an end in Christ! The religious facade that disguised the law of works as a means of defining a person’s life, was openly defeated. The success of the Cross will never be silenced! Col 3:1 Since you are in fact raised together with Christ, relocate yourselves mentally; engage your thoughts with throne room realities! Col 4:4 My sincere desire is that my message will accurately unveil the mystery of Christ in its most complete context. You! This is the mission of my life! (Eph 3:9)

Here is a visual, artistic summary of the book of Colossians: https://www.youtube.com/watch?v=pXTXlDxQsvc 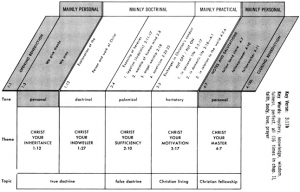 We will continue with Les.1 next week.