PROPHETIC WARFARE FOR A NATION

By Becca CardJanuary 24, 2021ABOUT THE PROPHETIC - BONNIE NELSON 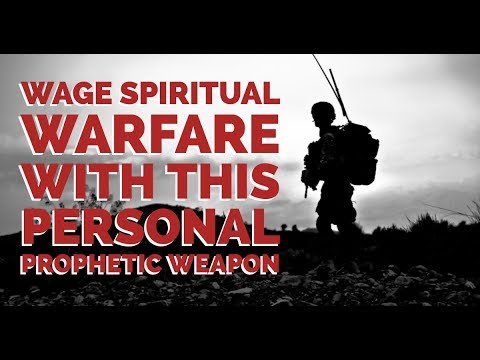 Friday night in the Prophetic Training Class we talked about how the prophecies God sends us are really spiritual weapons of warfare sent, so we can fight the good fight of faith. Has there ever been a time before where a Word from Yahweh was needed more, as we watch the unraveling of our Nation? Can a prophetic word be a weapon we can use to pull our Nation together in victory, or used to set it further down the road to hell fire and damnation? We shall see.

In I Timothy 1:18-19 Paul speaks to Timothy: “This charge I commit to you, son Timothy, according to the prophecies previously made concerning you, that by them you may wage the good warfare. 19) Holding faith, and a good conscience; which some having put away concerning faith have made shipwreck:

Paul is reminding Timothy and us, of the prophecies which have already been spoken over him (us) and says, Go to War!

Did you know Prophecy is from the future telling you about your future? It is not about yesterday or today, it is about the future and where God sees you. Paul is saying, take those words from your future and wage “GOOD” warfare over them to bring them to pass. Prophecy invades our hearts when we receive it, but we all should understand, we have a part to play in activating it. Activating your prophetic word will require “Kingdom warfare.”

Spiritual warfare is required, if you are going to “walk into a prophecy” over your life.

We automatically get some things by inheritance. In Mark 10 it is written, “unless we receive the Kingdom as a child we “cannot” enter into the Kingdom. This is referring to our “Identity or Inheritance.”

When we receive Christ we come to Him as a child. Example: Your inheritance/identity is liken to when your dad or grandfather dies, you are related/kin. You have their Identity, so you are entitled to an inheritance through your blood line. You go to an attorney to find out what has been left to you in their will. You do not have to do anything to earn what is in the will, you get it because of your identity. It is your inheritance.

Likewise you have identity in Christ. You can’t loose your salvation, you don’t need to work to keep it, you are set in your identity and inheritance because, it is through the Cross in the Blood of Jesus Christ, Period!

But, there are other blessings you can only get from by warfare. “The Kingdom of Heaven suffers violence and the violent take it by force. Matthew 11:12

Paul told Timothy there are prophecies over your life, things about your future in which God has “already declared.”When the enemy comes in like a flood, reach up and grab that prophetic word from the future and war, come into agreement with the Word and war to bring it forth. If Yahweh spoke it and you line up with it, you come into agreement with Him.

Isaiah 55:11 says, So shall My Word be that goeth forth out of my mouth: it shall not return unto me void, but it shall accomplish that which I please, and it shall prosper in the thing whereto I sent it.

We have to learn to war with our prophetic words by saying them out loud and reminding Yahweh and all of creation He spoke them. It is not enough to put the prophecies in a book somewhere, in the file cabinet or in a drawer somewhere, it is about war, spiritual warfare with them.

We can’t just think a word, we can’t just know a word in our mind, we have to SAY IT! In Mark 11 23-24 “Whosoever shall say unto this mountain be thou removed and cast into the sea and shall not doubt in his heart, but believe the things that he saith shall come to pass he shall have whatsoever things he saith.

You have to talk to those mountains in your life and you have to declare, proclaim and prophesy your Word from the LORD. Make it come ALIVE – SAY IT! Release it, set it off like a missile and let it RIP into the heavenlies. Say It!

The most powerful prayer is when we say back to God what He has already said to us, from the Bible and from our Prophecies. It is called warfare!!!!

Your Prophecies,
Your Prophetic Words Are Spiritual Weapons

When you speak out Your Prophecy, think on this, Angels give attention, they hearken to the Word of the LORD. Daniel went to God reminding him of the prophecy which had been hanging over Israel for 70 years. He said, Hey God, this prophecy was supposed to end today. So, because Daniel fasted and prayed with the “prophecy,” God sent an Angel and he broke the power of captivity, turned it around and re-established the nation of Israel. Psalm 103:20

Evil has a very loud voice in our world today. You hear the voices raging on every channel, newspaper, and social media platforms against Trump and those who are brave enough to stand with him. We are also hearing a voice rising up in the Church of condemnation and cries of false prophet!!

It is one thing to be chastised and condemned by the world, but to have such voice rising from the Church, against the Prophet’s, is another thing, which needs to be addressed biblically. I Corinthians 14

We are never told to condemn the Prophet who speaks forth the Word of the LORD. We are to judge the prophecy. The issue surrounds the Prophets who proclaimed Trump would serve as President of the United States for “TWO” terms, but because of the outcome of the election, Biden has been officially sworn in as our newly elected President. And by the way, did anyone think the prophets missed it, before the results were announced?

The terms, “they missed it” and “false prophet” are running rampant in the house of God, but did you notice there has not been any condemnation from the World. They watch and celebrate and we turn inward and against each other. I would suggest to you The Prophets did NOT miss it. President Trump did win and probably by a land slide, but this election was done in a manner where he did not have a chance, due to well laid plans, illegal election laws, voting irregularities, foreign tampering of machines and the handling of mail in ballots. Those who voted for President Trump were out smarted by those who did not and made the effort to devise ways to backup their desires.

There are a couple more issues to consider on what I think contributed to this loss and I am one of them. We all talked about the prophecies, but did we worship and war for the Word to come to Pass?

The Prophet’s did what they are suppose to do. They prophesied Trump would win and brought the Word to the Church. At that point, I should have come into agreement with them and began to do warfare to call the Word forth.

In 2 Chronicles 20 Jehoshaphat saw the enemy coming and went to the people to pray and a Prophet stood up and proclaimed they did not have to fight, because Yahweh would fight for them. They all came into agreement fasting, praying, worshipping and then went to Praise. The next day they prepared to go with singers, dancers and flaggers in front of the Army. They were in one accord with the Prophet and the Word of the Lord.

The Lord did fight for them, while they sang and praised, God sent chaos to the enemies camp and they turned on themselves. Food for thought. It took them 3 days to pick up all the loot and on the fourth day, they cleaned up and went to worship the LORD YAHWEH!

Did we do that with what the Prophets brought forth about President Trump? I like many others were bathing Trump in prayer, asking for protection, wisdom and some fasting. But, I can honestly say I was not using the prophecies and doing warfare with them. I have a sense in my spirit many figured he would win, gave lip service and didn’t even vote, for whatever reason.

We were not wise or organized as well as we should have been according the voting procedures. We “assumed” everything would be fine and even after all the issues, we didn’t even raise the roof concerning Georgia’s election procedures the second time around.

Evil is raging and ravaging our Nation and it has come in many forms to tear down the Church of Jesus Christ. Our doors have been shut, so we cannot come together to teach, preach, impart and pray with the power of a heavenly army. “Thou shall not forsake the gathering of the Assembly of ourselves, comes to mind. Hebrews 10:25

We have been masked and forbidden to sing and worship our God Yahweh and now, there is a major attack against the Prophet’s to silence Yahweh’s Voice in His House. What is really sad is this attack is coming from within the Church. We are turning against our own. That is sick!

So, before we all turn on the Prophet’s and stone them, which is what Satan wants us to do, let us reconsider what has happened, how we could have all done better and come together now.

I thank You Father for sending a refreshing of courage, strength, wisdom and everything else we need to get up as David did after his son died. Let us shake ourselves, get cleaned up and come before you with our worship and praise, for surely You are a Holy and Righteous God, who loves us beyond our understanding. May You be Glorified Yahweh in the Name of Yahshua.

There Are Two Kinds Of Courage

Which Do You Choose