By Becca CardNovember 19, 2019ABOUT THE PROPHETIC - BONNIE NELSON

The recent Friday Night Prophetic Training Classes have been focusing on Discernment and Discerning Spirits. This week we looked at a picture, which a friend of mine took, while she and her husband were driving by the Andrew Jackson Hermitage Mansion. They were celebrating Veteran’s day with a beautiful and very extensive display of our American Flags, a lot of flags.  Her camera caught something unusual/supernatural on the video and I wanted to share it with the class to see if anyone felt or saw something spiritual for us. This is a real discernment exercise for all of us.

There is a very large white form in the picture and some small lighting effects at the base of some of the flags and the tree.  Some of the sparkling can be attributed to the rain falling and the lighting of the fields.  Here is the picture. What do you see and/or sense? 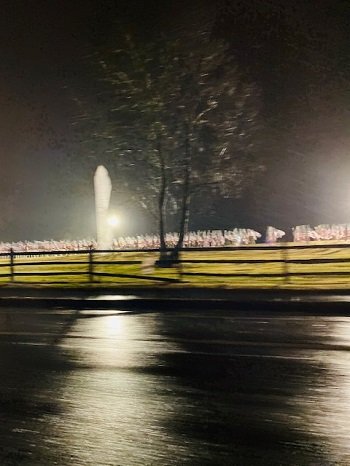 We discussed the picture in class and some felt the large white object could be a Watcher or Guardian, another shared it looked like someone with a hoodie and another didn’t see anything supernatural.  One person said “A ghost?” To which I responded, “I don’t believe in ghosts.”  I have studied the history behind the Ghosts and Goblins tied into Halloween and truly sense we are really dealing with spirits. If you study where and how Halloween’s origin came to America, you will realize it is an evil holiday and was not birthed in the US.

Halloween originated in Ireland as the Celtic festival of Samhain around a thousand years ago, which is why so many of Halloween traditions – regardless of where you are in the world – are Irish! Halloween was originally a pagan festival called “Samhain,” meaning “end of summer.” It is not hard to find the information regarding Halloween and all the darkness involved with it. It is “still” a pagan festival.

Anyway, I mentioned the picture to a friend at lunch who see’s in the spirit.  Later in the day they called and said, it’s a ghost, even though you don’t believe in ghosts, (chuckle). They said the Andrew Jackson Hermitage Mansion is haunted and they have ghost tours. I went to check it out and they were right.  Tickets for tours $22 – $89.

They are actually advertising the Hermitage as being haunted and have several photo’s showing several apparitions, meaning: “ghost like images of a person,” something remarkable or unexpected. Here are a couple of the pictures where the picture is feminine and notice from about the waist down the rest of their image is missing. 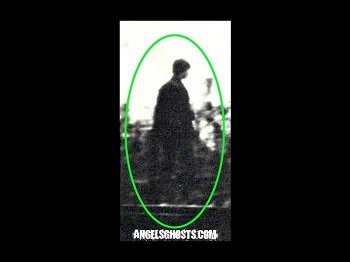 After reading all the history and some of the personal things they shared on the site about Andrew Jackson and his family, I was quickened in my spirit when I looked at the pictures of the women. I believe this apparition is what is called a “familiar spirit,” “family spirit,” which might have revolved around Andrew Jackson’s wife or her family and continues to counterfeit the appearance. *Satan is the great counterfeiter. 2 Thess 2:9; 2 Cor 11:14-15.

The word “familiar” is from the Latin familiaris, meaning a “household servant,” and was intended to express the idea that sorcerers had spirits as their servants, ready to obey their commands.

From the Prophet’s Dictionary (Paula A. Price, Ph.D. Foreword by Dr. Bill Hamon:

Familiar Spirits – A divining demon working through a sorcerer or conjurer. A witch’s or occultists’s guide. In ancient times, the term was derived from the generation spirit that supplied a family with its supernatural knowledge,, worldly possession and success, and spiritual wisdom. That spirit was thought to belong to the family line, therefore it was worshipped and sought for ancient and spiritual divine light and knowledge. Spiritism, necromancy and psychic revelation were believed to come to certain “gifted” members of the family by this medium which received its powers from the demons Satan assigned to their family line. Leviticus 20:27; I Samuel 28:8; 1 Chronicles 10:13; 2 Chronicles 33:6; Isaiah 29:4.

Definition of familiar spirit. 1 : a spirit or demon that serves or prompts an individual. 2 : the spirit of a dead person invoked by a medium to advise or prophesy.

It appears many believe the Hermitage is haunted by a ghost and no one seems to be coming forth with any other explanation. They probably don’t want to hear this is not really a ghost but a demon or better said, a familiar spirit. They seem to be happy marketing this spirit and making a profit, but a word to the wise, playing games with a demonic spirit is a very dangerous thing.

(For what will it profit a man if he gains the whole world and forfeits his soul? Or what shall a man give in return for his soul? Matthew 16:26)