By Becca CardSeptember 18, 2020ABOUT THE PROPHETIC - BONNIE NELSON 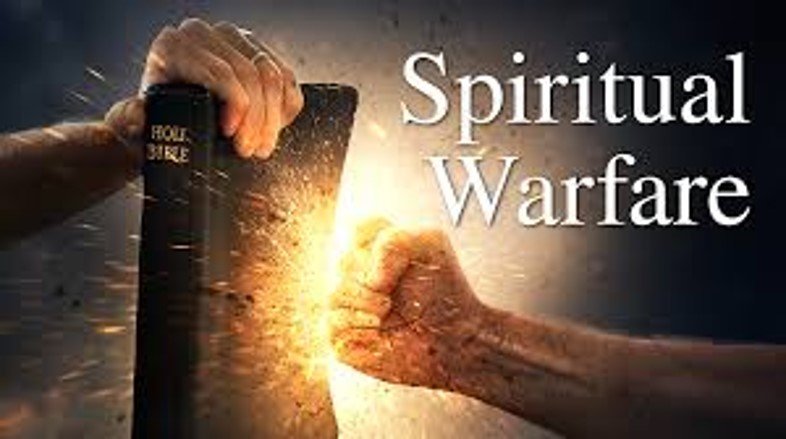 Some of you may be wondering what happens in the Firestorm Prophetic Training Classes. Well, we are training and equipping people to hear the Voice of Yahweh and enable them to bring His Words forth to help edify, exhort and comfort the Saints. However, we are also bringing revelation to what is written in the Word about the authority, responsibility and callings God has placed upon our lives as well.

Yahweh knew we needed to gather or “assemble together.” so we could learn from each other and share fellowship. We come together and link up, not only as believers, but friends and the next part is the best; we become family.

Training & equipping can take on different forms. For instance, we focus on our five senses in the natural in our day-to-day life, but did you know, we have the same 5 senses in the spiritual realm?

You can see something with your natural eyes and yet, if your spiritual eyes are not open (activated), you will not see the deeper spiritual message. Your spiritual eyes will enable you to look deeper into a situation with prophetic insight.

Since we have been trained from birth to see things in the natural, it takes a bit of practice to begin to use your “spiritual eyes.” It is almost like some of the brain puzzles we have where something is hidden right before your eyes.

It takes some exercise and guidance to begin to “hear, feel, taste, smell and touch” through your spirit. You may have an opportunity to smell something foul and think something has spoiled when in reality, an evil spirit may have entered into the area where you are. They usually do not carry a pleasant smell.

Likewise, when we “sense or feel” the Presence of Yahweh, it may come upon us with a warm blanket like feeling, or the famous Holy Ghost Goose Bumps, in contradiction to feeling a cold presence, or a sense of danger, a warning in our spirit.

Being able to be sensitive, not only in the natural, but also in the spirit is key to our everyday survival and to be able to move “deeper” in the Prophetic Ministry because, not everything which says it is of God, really is. Not every prophetic word, deed, picture, object and/or feeling is God. There are two supernatural kingdoms at work on this Earth seeking our worship. One loves us, one uses us.

If we are to answer the call Yahweh has given us to be victorious over the kingdom of darkness and help people learn the truth about who He is and why they need to be saved, we need to be spiritually fine tuned and ready for whatever our natural and spiritual enemies throw at us.

I don’t know about you, but as I watch the news and see people releasing anger, hate and now, two police officers murdered, I find it hard to believe these people are human. Who can do such things to another person? I sense we are looking at the faces of demons. Think about it?

We have six weapons: Girdle of Truth, Breastplate of Righteousness, Shoes of the Preparation of the Gospel, Shield of Faith, Helmet of Salvation, and the Sword of the Spirit (The Word of God) and with the exception of the “sword,” all these items are for protection and self-defense and even though the sword can be used offensively, it only reaches as far as the arm of the person using it.

None of these defensive weapons will enable us to deal with the strongholds mentioned by Paul in 2 Corinthians 10, where he seems to be saying – we have an obligation to cast down these strongholds and/or fortresses.

3 For though we walk in the flesh, we do not war according to the flesh. 4 For the weapons of our warfare are not [a]carnal but mighty in God for pulling down strongholds, 5 casting down arguments and every high thing that exalts itself against the knowledge of God, bringing every thought into captivity to the obedience of Christ,

Do we have weapons for an offensive attack against Satan’s strongholds? Which mode are we supposed to be on, offense or defense? Well, to my knowledge, no army in history ever won a war moving in the defense mode. One General was asked, “In a war, which army wins?” He replied, “the one which advances.”

In Matthew 16:18 Jesus was speaking to Peter in Caesarea Philippi at the foot of Mount Hermon, which was a city dominated by immoral activities and pagan worship to Pan, Baal and Greek fertility gods. This place was also known as, “The Gates of Hell.”

Interestingly, this was the place Jesus chose, to deliver His Message to His Disciples. In that pagan setting looking at all the caves and knowing what was going on, Jesus spoke to them and prophesied over them to build His Church and it would be a Church the gates of hell would NOT prevail against. It was here Jesus challenged His Disciples to go on Offense

I want to spotlight the offensive weapons of warfare Jesus gave His Disciples (and us) to attack and pull down strongholds and any fortresses Satan has built, or is trying to build in our life, or our family. It is Time to rise up and be who we were created to be: The Son’s and Daughters of Yahweh, The Church of Jesus – The Christ.

Let’s take a serious look into the offensive weapons we have been given, not just those that protect us.

The Sword of the Spirit 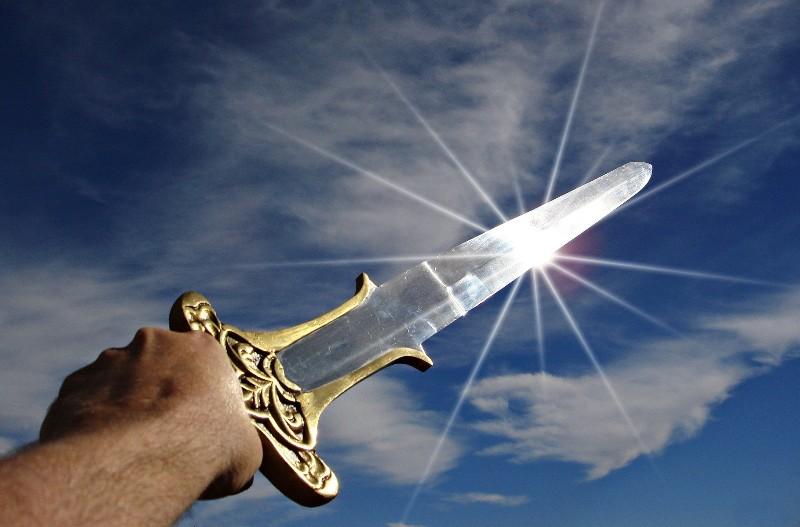 The Sword of the Spirit is not purely for defense. If we put on all of the “Armor of God,” we are protected to a certain degree, but they are not able to drive our enemies from our presence. The only thing in the list of our Armor, which can do that, is the sword, which is called “the Word of God.”

In Hebrews 4:12 we read: The word of God is living and active, sharper than any double-edged sword (originally a “two mouthed” sword), penetrating and even dividing the soul and spirit, joints and marrow. It judges the thoughts and attitudes of the heart.

The two-mouthed sword in the Greek is where God speaks His word and it creates one edge on the sword, then when we speak His word in agreement, we add the other edge to the sword and thus, it becomes a two-mouthed sword, penetrating the marrow, the very innermost part of a physical being. It divides and penetrates between soul and spirit, the deepest inner area of the human personality and it is sharper than any double-edged sword.

In Revelation 1:16, John had a vision of Yahshua/Jesus: “In His right hand He held seven stars, and out of His mouth came a sharp double-edged sword, representing the Word of God coming out of His mouth. It is wise to see how Jesus used the sword (Word of God) in the Bible as an example for us to follow.

Matthew 4:1-11 Jesus was tempted by Satan after fasting 40 days and then led into the wilderness. Every time Jesus encountered Satan personally, the only weapon He used against him was the sword of the Spirit, the Word of God.

1. Then Jesus was led up by the Spirit into the wilderness to be tempted by the devil. 2 And when He had fasted forty days and forty nights, afterward He was hungry. 3 Now when the tempter came to Him, he said, “If You are the Son of God, command that these stones become bread.”4 But He answered and said, “It is written, ‘Man shall not live by bread alone, but by every word that proceeds from the mouth of God.’ ”

5 Then the devil took Him up into the holy city, set Him on the pinnacle of the temple, 6 and said to Him, “If You are the Son of God, throw Yourself down. For it is written: ‘He shall give His angels charge over you and, ‘In their hands they shall bear you up, Lest you dash your foot against a stone.’ ”7 Jesus said to him, “It is written again, ‘You shall not [a]tempt the Lord your God.’ ”

8 Again, the devil took Him up on an exceedingly high mountain and showed Him all the kingdoms of the world and their glory. 9 And he said to Him, “All these things I will give You if You will fall down and worship me.”10 Then Jesus said to him, [b]“Away with you, Satan! For it is written, ‘You shall worship the Lord your God, and Him only you shall serve.’ ”11 Then the devil left Him, and behold, angels came and ministered to Him.

Check this out. Did you notice, neither Jesus or Satan questioned the authority of the Scriptures? Pretty amazing when you realize Jesus used the Scriptures from only one book, Deuteronomy, which is the main book modern theologians and critics attack even today, but Jesus and Satan understood and respected the Authority backing those words.

Second, Satan only used one tactic or temptation against Jesus, “doubt.” Every time he confronted Jesus, he used the word “if.” He wanted to lure Jesus into doubting what was written.

Satan quoted Psalm 91, but Jesus quoted again from Deuteronomy. Satan was attempting to use Scripture against the Son of God, just think about that. If he did it against Jesus, what makes you to think, he won’t use it against you and me too?

It is wise for us to study the Scriptures, if we are going to deal with the devil. We should be aware there are people who “misapply” Scriptures even today and try to tempt us into making wrong choices.

Did you notice Jesus did not answer the devil with human theology or religious affiliations about His synagogue, who His rabbi was or the seminary school He attended. He always went right to the Scriptures and quoted, “It is written, “boom a thrust of the Sword; it is written, “boom another; “boom another strike with the Sword. Three times He used the double-mouthed sword, cutting to the quick in the spirit realm. After the third cut, Satan backed off and left him.

Today, we have the same authority and ability to use the weapon Jesus used. This is awesome, because looking at Luke 4:13 it says: “When the devil had finished tempting Jesus, he left him until the next opportunity came.”

Did you catch that?

In Ephesians 6:17, Paul speaks about the sword of the Spirit, the Word of God and the Greek word he uses for “word” is “Rhema,” which primarily always means, “a spoken (living) word.”

When we release the Scriptures directly, then they become the double-mouthed sword of the Spirit. It is a powerful, living weapon of warfare, capable of causing major damage to any spiritual foe.

There is also a co-laboring, which takes place between us and the Spirit of God, when we “take the sword and release the Word of God.” When we step out in faith, Yahweh will give us the wisdom to know when, where and how to use the it and the Power of His Word will come forth to separate us from enemies coming to rob, steal and destroy.

There are several other offensive weapons we have in our arsenal to defeat our enemies and we will talk more about them in the next meeting. Hope to see you in one of the upcoming classes.