Today is an exciting day for Firestorm!  Merva’s Verse4Monday has been a Firestorm favorite for many years.  Merva and her husband George were on the way to the Firestorm conference when Merva fell and broke her elbow.  There have been a lot of challenges since then including two surgeries and a very serious infection.  Please continue to pray for Merva & her husband George.  Be blessed today as you read Merva’s Verse4Wednesday (this week)!  We love you Merva! 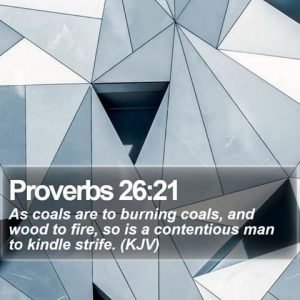 “Just as charcoal and wood keep a fire going,

and wood to a fire.

It tends to escalate, or cause them to become more intense or

I’ve read in a few devotionals, the first four steps in dealing with people who frustrate, annoy, and hassle us:

Look at their behavior.

Refuse to be offended.

Cut them some slack, and

Refuse to gossip about them.

You know what else?

You also need to refuse to play their game!

You may have seen something like this on the internet.  Somebody makes an off-the-wall statement, and you go, “I’m going to set him straight!”  And at that moment, the other person is going, “Got ’em!  I just hooked a big one!”  Every bone in your body wants to fire off a reply to that blog, that e-mail, or that Facebook post!

“If you wrestle in the mud with a pig, both of you will get dirty,

but only one of you will enjoy it.”

Stay out of the mud!  Don’t get sucked into the argument!

Just walk on by!

“Just as charcoal and wood keep a fire going,

EGRs love to keep the argument going.  Did you know that?  They find their meaning, their purpose, and their value by getting you/us upset!

Don’t get drawn into it!  They’re not looking for answers!

They’re just looking for an argument!!

How many people does it take to argue?  It takes two, right?  If one of them walks away, what happens to the argument??

It ENDS!!!  The fire goes out!  Sometimes, the most merciful thing you CAN do is WALK AWAY FROM the ARGUMENT!!!

What do you think?