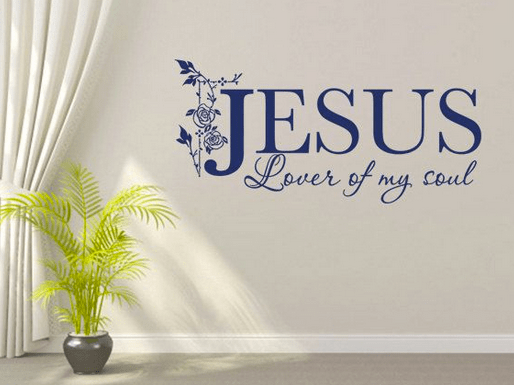 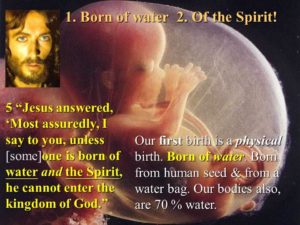 The first step is a physical birth, which gains one entry into the kingdom of man. Step two is a spiritual birth into the Kingdom of God. If men accept Jesus as their Savior their names are written into the book of life and they become heirs to eternal life.
They were born initially as physical bodies and will be born again, as spiritual bodies, upon the return of Jesus:
And behold, I come quickly; and my reward is with me… (Revelation 22:12)
Nicodemus did not understand how someone could be born again. Therefore, he specifically asked that question: Nicodemus saith unto him, How can a man be born when he is old? Can he enter the second time into his mother’s womb, and be born? (John 3:4)
Jesus gives him a straightforward answer. This is the definition of being born again:
Jesus answered, Verily, verily, I say unto thee, Except a man be born of water and of the Spirit, he cannot enter into the kingdom of God. That which is born of the flesh is flesh; and that which is born of the Spirit is spirit. Marvel not that I said unto thee, Ye must be born again. (John 3:5-7)
Jesus states no man can see the Kingdom of God unless he is born a second time. The first and obvious birth is a physical process involving water. We are composed of approximately 70% water and carried in water in the womb. All humans who have been born since the creation of Adam and Eve have been born of water. This first birth gets us into the animal kingdom as Homo sapiens, or man. Although man is a living breathing animal, he was created in the image of God and is the only animal capable of being born again as a spirit.
Some might confuse the phrase “born of water” as meaning we must be baptized to enter the Kingdom of God. Thus the tradition of baptizing babies was created. However, it should be obvious to anyone that to enter the Kingdom of God, one must first be born as a human being, or born of water. 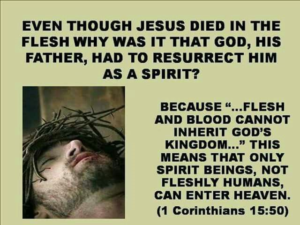 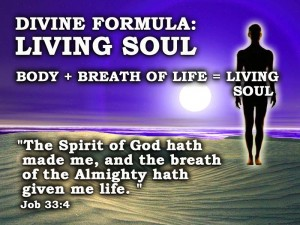 The first man Adam was made a living soul, or being, because he was part of the animal kingdom. That is, the first body any human has is that of a living, breathing being. The last Adam will be made a quickening spirit since he will live in the Kingdom of God. That is, the last body any former human can have will be an eternal spiritual body.
Notice that “Adam” is identified as a “man” only when he is made as a living soul or being. When “made a quickening spirit” the entity is called only Adam. This is significant because at this point, Adam is no longer a man, or human being.
The last Adam is made a quickening spirit, which lives forever. Of course, any human’s name can be substituted in the place of Adam. Flesh and blood, such as man, cannot inherit the Kingdom of God. Thus one must be born again as a spirit.
Consider this sentence from the above verses, “Howbeit that was not first which is spiritual, but that which is natural; and afterward that which is spiritual.”
The answer is that once spiritual bodies are created, it’s a done deal! They cannot be terminated. They are immortal! Therefore, that which is natural comes first, a human body. That human being may or may not inherit a spiritual body, based on his choice, regarding Jesus.
God does not desire to create more immortal rebels! Jesus does not want workers who do not want Him!
These verses also negate the myth that men are born as an immortal soul living within a physical body. It specifically states that they are separate, and come in two stages.
The natural body comes first and is then followed by the spiritual body:
Howbeit that was not first which is spiritual, but that which is natural; and afterward that which is spiritual. (I Corinthians 15:46)
The natural body comes first and the spiritual body comes last. They are different and are never merged together at anytime, in the scriptures! All men are born as natural or physical flesh and blood bodies, and those who believe in Jesus will be born again as spiritual bodies, when Jesus returns!
If Jesus Christ himself informed mankind they did not possess a spiritual body or soul at birth, would He be believed? Apparently not, since Jesus basically made that statement in the book of Luke.
Jesus was resurrected from the tomb as a human and ascended to heaven as a spirit shortly afterward. When He appeared to His disciples after being raised from the dead, they initially thought they were seeing a spirit or ghost:
But they were terrified and affrightened, and supposed that they had seen a spirit. And he said unto them, Why are ye troubled? and why do thoughts arise in your hearts? Behold my hands and my feet, that it is I myself: handle me, and see; for a spirit hath not flesh and bones, as ye see me have. (Luke 24:37-39)
Jesus Christ states that “a spirit hath not flesh and bones.” This negates the nonsense that man is a soul housed within a physical body. Jesus states that they do not mix!
Jesus Christ was never flesh and spirit at the same time. He was resurrected into a physical world as a physical body containing flesh and bones and a need to eat food:
And they gave him a piece of a broiled fish, and of a honeycomb. And he took it, and did eat before them. (Luke 24:42-43)
This was after His resurrection that He ate food. He took on His spiritual body shortly afterward as He ascended into the spiritual Kingdom of Heaven:
And it came to pass, while he blessed them, he was parted from them, and carried up into heaven. (Luke 24:51)
The 50% of Americans who mistakenly believe they are born again Christians believe they became so when they accepted Jesus and were saved. They believe all mankind is born as a spirit living within a flesh and blood body, and point to Genesis for this erroneous belief:
And the Lord God formed man of the dust of the ground, and breathed into his nostrils the breath of life; and man became a living soul. (Genesis 2:7) 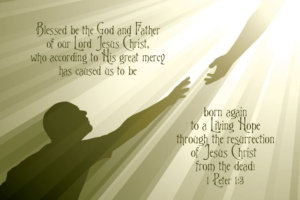