HAPPY NEW YEAR RESOLUTION – GET YOUR SHOUT OUT – BONNIE NELSON

As we move into the new year of 2020, I wanted to share something very special Yahweh has put on my heart with you.  Recently in worship, sometimes in giving a prophetic word and/or praying over someone, I have felt a strong urge to give out a shout to the LORD.  Has that every happened to you?

Later, I was reading an article from Bill Hamon and he mentioned, there were three shouts in the Bible.  Really! Reading on, I learned about the, “Shout of Faith,” the “Shout of Joy,” and the “Shout of Victory (the War Cry).”

Although it’s not listed in the Bible, I think we should add one more shout, because here on Firestorm, we often give out the “Shout of Whoo Hoo,” in celebrating a move of God. Whoo Hoo, by the way, is a real word and according to Webster’s Dictionary, has various spellings and is; “used to express exuberant delight or approval!  Well then, Whoo Hoo and Hallelujah (Shout)!

I am sure everyone knows about the “corporate” shout we do when we are in a group of people at a football or basketball game, or when someone we love succeeds in business, school or how about celebrating our favorite singer or musician at a concert. When we all come together and give out a shout, it can literally “shake the ground and raise the roof off the building”.

I am not sure how it happened, but it appears in the church today, we might have become a little bit too refined to shout or maybe we have lost, retired or even “forgot” about our shout and how important it is to use it when we gather together in worship or in our everyday lives. We need to know why we should regain and strengthen our shout, because we just might be missing one of the most important spiritual concepts in the Bible, all wrapped up in a “shout.” I didn’t know Scriptures had so much to say about “shouting.” Trying googling the word shout in the Bible, you will be amazed and blessed.

Now I don’t mean shouting all the time and being out of order and such, but there is a time and a place for us to shout in our worship and in our warfare.  Use wisdom and self control with your shout.

One of my favorite examples of a shout of “faith” is the one at the battle of Jericho. Here is Young’s Literal Translation of Joshua 6:20.

Think about this statement, “the wall falleth under it.” What did the wall fall under? The SHOUT!

Recently, archeologists found a part of what is believed to be the original wall of Jericho which fell and it did not fall flat as some translations say, it was pounded straight down into the ground.  What kind of a Shout can do that?  I say it was, “A Hallelujah Shout of Faith IN our God Yahweh!!!!! There was “Supernatural Faith” in Yahweh released, when those people circled that wall protected city, with their lanterns, trumpets and on the last day, in obedience to the Word of the LORD, they RELEASED, their “Shout of FAITH.”

Joshua’s strong faith in God led him to obey, no matter how illogical God’s command was. He drew from the well of their past, their history and remembered the impossible deeds God had already accomplished through Moses. Yahweh tells us to remember what He has done. (Psalms 77:11; 105:5) The people followed Joshua and stepped out of the boat walking on their in faith and got the victory. Yes, they had to fight, they had to do their part, but the wall was removed. Their shout was the Shout of Faith.

How about the Shout of Joy? Can there be any better reason to shout for joy in December than during the celebration of the birth of Christ or in the month of January, for the very first day of the new year? No one can deny we give praise to Yahweh for His Son Yahshua or that we don’t shout a countdown, 10 seconds before midnight on December 31st, but let’s look at some scriptures about the shout of joy…..Ezra 3:11

They sang one to another in praising and giving thanks to Yahweh, “For he is good, for his loving kindness endures forever toward Israel.” All the people shouted with a great shout, when they praised Yahweh, because the foundation of the house of Yahweh was laid. WEB 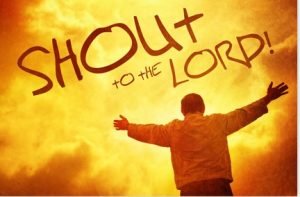 Psalm 47:1  For the choir director. A Psalm of the sons of Korah. O clap your hands, all peoples; Shout to God with the voice of joy. NASB

Psalm 95:1 Come, let us sing to the LORD! Let us shout joyfully to the Rock of our salvation. NLT

There are so many more scriptures revealing the shout of joy, but let us not forget the “Shout of Victory, The War Cry.” 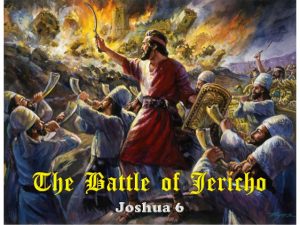 The Shout of War

Sometimes the enemy surrounds us and distracts us from the real battle and we can loose sight of the One who delivers and saves.  In 2 Chronicles 13 Abijah and Judah looked around and they were completely surrounded by their enemy.  We may not be surrounded by enemies like they were, but we can be surrounded by sickness, family problems, drugs, financial problems and such, each pressing on our souls and trying to cause us to loose faith in our God and just give up, but I’m telling you today, that is not an option for us and it was not an option for Abijah and Judah either.

In verse 15 in the NLT….and the men of Judah began to shout. At the sound of their battle cry, God defeated Jeroboam and all Israel and routed them before Abijah and the army of Judah.

In other words they gave out a “Shout of War.”  They declared war, they didn’t accept defeat, they went to battle. Yahweh will do His part, He will guide you to victory, for He is the LORD of Hosts.  Look at the “effect” of the “Shout of War is revealed in verses 15-17:

He destroyed 5000 of the best men of Israel out 8000, the remaining had to flee cause they were scared. Did you get that?   When you and I begin to really rely on God, and give out a Shout of War, we WILL have the victory. Can you see why the enemy of our souls has sought to silence OUR Shout of Victory, OUR War Cry?

Everyday all of us are going to be facing some kind of spiritual warfare or battle in our lives against the forces of evil.  There is no where to run and nowhere to hide.

I will give you one more SHOUT, the best ONE I know

The Greatest of them ALL!!!! 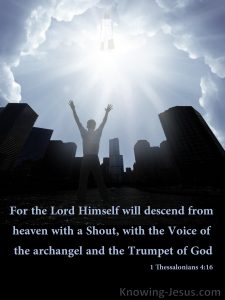 Time to Get Our Shout On and Out