God’s Will NOT Welcome in US Congress

God’s Will Is Of No Concern
Of This Congress 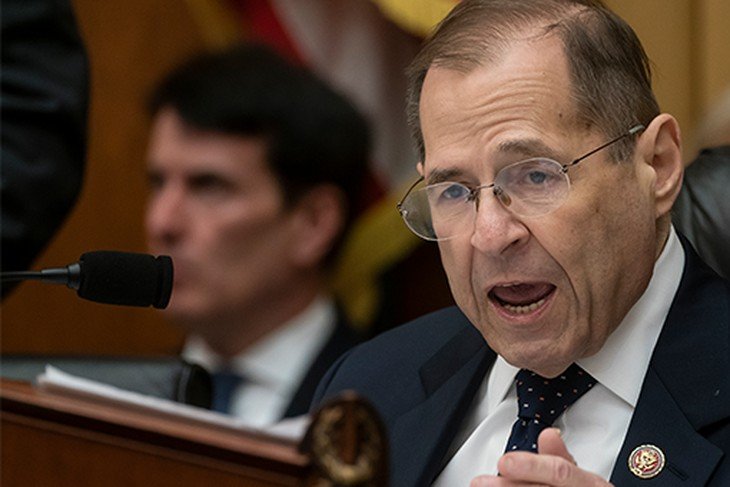 Last Thursday, as the House of Representatives debated H.R. 5, the Orwellian “Equality Act,” a seemingly exasperated Rep. Jerry Nadler (D-N.Y.) arguably revealed the true nature of his party’s radical legislation. In response to Rep. Greg Steube’s (R-Fla.) speech quoting the Bible, Nadler declared that “what any religious tradition describes as God’s will is no concern of this Congress.”

“A woman must not wear men’s clothing nor a man wear women’s clothing, for the Lord your God detests anyone who does this,” Steube said, quoting Deuteronomy 22:5. Christians do not believe this section of the Torah, the Old Covenant law, is binding on Christians today, but we do hold that this law expresses God’s truth and directs human beings toward the higher law of Jesus in the New Testament.

“It’s not clothing or personal style that offends God, but rather the use of one’s appearance to act out or take on a sexual identity different from the one biologically assigned by God at birth,” Steube said (he should have said “assigned at conception”).

The congressman warned that “the gender confusion that exists in our culture today is a clear rejection of God’s good design” and that “whenever a nation’s laws no longer reflect the standards of God, that nation is in rebellion against him and will inevitably bear the consequences.”

Nadler could not let that stand.

“Mr. Steube, what any religious tradition describes as God’s will is no concern of this Congress,” the Democrat argued.

In comments to EWTN, Steube responded by noting that the House of Representatives itself has “In God We Trust” behind the Speaker’s rostrum.

“To say that religion has no place in this Congress when our country was founded on Judeo-Christianity, I certainly disagree with that,” Steube said. He insisted that Judeo-Christian beliefs do belong in Congress. Nadler did not respond to EWTN’s request for comment.

“Mr. Nadler has forgotten the Constitution,” CJV President Rabbi Pesach Lerner said in a scathing statement. “The Founding Fathers required Congress to avoid infringing upon the free exercise of religion, meaning it must be sensitive to what every religious tradition describes as G-d’s will. It is especially true that Congress must remain cognizant of the set of foundational moral principles – including valuing peace, human life, and individual liberty and responsibility – that America calls Judeo-Christian ethics.

CJV joined many other organizations in opposing the Equality Act, warning that the legislation would eviscerate religious freedom and condemning the bill as “a disgraceful attack upon Jewish Biblical beliefs.”

“The Equality Act expressly declares that the Book of Genesis [see 2:24] and all of the Jewish laws pertaining to marriage as a sanctified union between man and woman… are nothing more than engagement in discriminatory stereotypes,” CJV argued in a letter to Congress.

“Mr. Nadler has unmasked the true nature of the Equality Act,” CJV Vice President Rabbi Yoel Schonfeld, argued. “Far from valuing diverse opinions and beliefs, it tramples free exercise of religion and even demonizes free speech. Reading the Bible in public, per the Equality Act, could be called an exercise in bigotry and grounds for a ‘discrimination’ complaint. Without question, the true bigots here are those who support deliberate attacks upon the cherished beliefs of others.”

The Equality Act would amend federal law to prohibit discrimination on the basis of sexual orientation and gender identity, among other things. It would expand the arenas in which non-discrimination law applies and explicitly gut religious freedom protections.

In true Orwellian fashion, the Democrats have crafted an Equality Act that will promote inequality, enabling the government to privilege LGBT ideology over the Americans who disagree, for religious or other reasons. The Equality Act opens the door to a host of governmental actions to stifle dissent and enforce orthodoxy on LGBT issues, particularly the divisive claims of transgender activism.

Nadler’s statement that “what any religious tradition describes as God’s will is no concern of this Congress” is utterly preposterous in the light of American history.