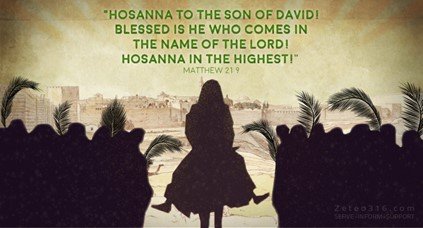 We read about the glorious entrance in Luke 19:11- “Go to the village ahead of you, and as you enter it, you will find a colt tied there, which no one has ever ridden. Untie it and bring it here. If anyone asks you, ‘Why are you untying it?’ say, ‘The Lord needs it.’ ” Those who were sent ahead went and found it just as he had told them. As they were untying the colt, its owners asked them, “Why are you untying the colt?” They replied, “The Lord needs it.” They brought it to Jesus, threw their cloaks on the colt and put Jesus on it. As he went along, people spread their cloaks on the road. When he came near the place where the road goes down the Mount of Olives, the whole crowd of disciples began joyfully to praise God in loud voices for all the miracles they had seen: “Blessed is the king who comes in the name of the Lord!” “Peace in heaven and glory in the highest!”

After entering the Holy city of Jerusalem on Palm Sunday, which in Israel is the first day of the week, Yeshua continues to explain to his disciples that he would be crucified shortly.
Jesus had become somewhat of a celebrity among people who had heard of the miraculous raising of Lazarus from the dead, and they wanted to see Him and treat Him like a king. But Jesus wasn’t to be their earthly king just yet. His aim was to become something more! And far greater than any of his disciples or even his immediate family were able to fathom … yet.

The Messiah had come to not only fulfill the prophecies but to live out the will of his father!

Here is what I hear the Father say this week: “My son is greater! He is more! “ Paul declares in 1 Cor 2:9 “No eye has seen, no ear has heard, and no mind has imagined the things that God has prepared for those who love him.”  The Messiah is not only our Savior, our High priest, our Redeemer and King of Kings- he is more! Yeshua himself is the son of GOD! Yes – the second person in the Godhead. He is the Holy one of Israel! And he will return once more! He will once more enter through the Golden Gate of Jerusalem and stand on the Mount of Olives splitting it in two.

Lord God, I give you thanks and I bless you, Lord, open my eyes that I may see him coming, and may praise him with a pure heart. And may walk in the way of his suffering and share also in his resurrection. Through Jesus Christ our Lord, who lives and reigns with you and the Holy Spirit, one God for ever and ever. Amen.