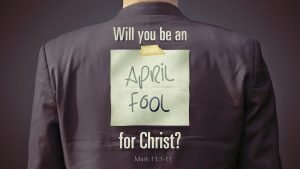 Being a FOOL for Christ…

Today is April 1st and while some people are trying to “fool” somebody or doing a prank, others might have experienced a condescending comment or look from somebody because of expressing their faith in Christ. Let me encourage you with the following Word of Power:

1 Corinthians 4:10, which famously says: “We are fools for Christ’s sake, but ye are wise in Christ; we are weak, but ye are strong; ye are honorable, but we are despised.” (KJV).

Where is the power in that? Let me explain. Though we shudder at the idea of being called a fool, in 1 Corinthians, we find Paul wearing the title as a badge of honor. Perhaps, as we approach April Fool’s Day, the day of hoaxes and fools, we should consider why. 1 Cor 3:18 tells us that “Let no one deceive himself. If anyone among you thinks that he is wise in this age, let him become a fool that he may become wise. (1 Corinthians 3:18)

I believe the Apostle Paul is trying to show us that becoming a fool for Christ is actually the wisest thing to do. What Paul actually does is point us to YESHUA. Even he looked foolish many times in the eyes of pharisees and family members not realizing who he really was; including his disciples who didn’t understand his methods or ways, and many people thought him weak and passive even though he was the personification of wisdom and strength. WHY? Because Yeshua turned the world around him upside down. The message of the Kingdom often times contradicted the message of the Pharisees for example when Yeshua pardoned an adulteress or reached out and healed a leper. How foolish was that! The message of the Gospel is foolishness to some but us, who believe, it is quite the opposite! And there lays great power within it: “For the word of the cross is folly to those who are perishing, but to us who are being saved it is the power of God.” (1 Corinthians 1:18)

Why is the way of the cross considered foolishness for those who are perishing?

But this is the upside-down world the gospel offers. Paul understood this upside-down world. He understood that God chose what is foolish in the world to shame the wise, and what is weak, low, and despised to shame the strong, haughty, and applauded, so the only cause for boasting would be in Christ (1 Corinthians 1:27-29). Let´s us Make a fool of ourselves- let us put aside our pride or bruised ego. Let us become more like Christ. Remember Noah? He certainly looked like a fool in many people´s eyes building an arc on dry land and yet he continued to carry out God´s will and by doing that and not giving up he saved not only himself but his entire family. Be a fool -it’s the wisest thing you can do! Not only on April 1st – but on any other day of the year.