FS Sunday Sermon Will He Fail Me Now?

Will He Fail Me Now?

When We Doubt the Faithfulness of God 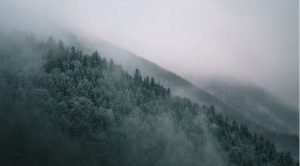 Fear has been a constant, albeit unbidden, companion of humanity since the fall. Concerns can range between the jitters from many-legged creatures to the debilitation of a doctor’s diagnosis, but consider for a moment the prevalent fear, even among Christians, of our own faithlessness.

A cursory glance at the words of our Lord alone should produce in us a deep desire to not be faithless. It’s a matter of joy. Believers, above all things, are not to be atheistic. Eternity is at stake, and crowns get snatched from those who do not hold fast (Revelation 3:11). Warning passages abound that pave the way for empowering grace as we fight for the eternal validation our hearts yearn for — “Well done, good and faithful servant” (Matthew 25:21).

And yet, this fear of faithlessness is not the one that keeps us awake staring at the ceiling in the dark night of the soul, or when hopes are dashed or finances dry up, or relationships crumble, or persecution bites.

Will He Come Through?

If we allow ourselves a moment of honesty, in times of trials and suffering, there tends to be a voice that does not strive against our faithlessness but calls into question the faithfulness of God.

Will he come through? Will he do what he has promised? Will he provide? Will he heal? Will he save? Will he strengthen? He will hold me fast. Will he?

One of the deep delights of spending time in Narnia is the sights we get of Aslan. One stands out to me. As Lucy utters the spell to make hidden things visible from the Magician’s Book, Aslan appears to her once again. Lucy is taken aback by his assertion that she had a part to play in making him visible. “It did,” said Aslan. “Do you think I wouldn’t obey my own rules?” This hit me as I was reminded that my obedience to God is an obedience that occurs second: God keeps his word. He always remains faithful.

We Do His Word

Our obedience is certainly required in Scripture. We are to “be doers of the word, and not hearers only, deceiving yourselves” (James 1:22). In a real sense, a person’s soul hangs in the balance regarding his glad-hearted obedience or soul-deluding disobedience. As crucial as hearing God’s word is, the testimony of Scripture is that the end of proper hearing is action.

What James wrote propositionally, Jesus painted pictorially through the image of a constructed house.

Everyone who comes to me and hears my words and does them, I will show you what he is like: He is like a man building a house, who dug deep and laid the foundation on the rock. And when a flood arose, the stream broke against that house and could not shake it, because it had been well built. But the one who hears and does not do them is like a man who built a house on the ground without a foundation. When the stream broke against it, immediately it fell, and the ruin of that house was great. (Luke 6:46–49).

When we are hearers only of God’s word, we become deceived and in as much danger as a beautiful home without a solid foundation. By grace, resolve to be like the owner who built his unshakable house on the firm foundation by being a doer of the word.

Because God Keeps His Word

But there is a more significant and fundamentally firmer foundation. All of reality rests on this foundation. Creation, redemption, sanctification, and glorification rests on this foundation. Our God is a doer of his word.
Our God is faithful to keep what he has promised because he is righteous in his character. As Aslan asked Lucy, “Do you think I wouldn’t obey my own rules?” It is the testimony of Scripture from Genesis 1 to Revelation 22 that our God will do what he said he would do. God is not a man, that he might lie, or a son of man, that he might change his mind. Does he speak and not act, or promise and not fulfill (Numbers 23:19)? Did he say it? Won’t he do it?

Woven into the very fabric of the nature of God is his faithfulness. In the proclamation of his name to Moses, loyalty is no minor trait. He abounds in faithfulness (Exodus 34:6). Poetic imagery in the song of Moses captures who the Lord is through the picture of a reliable rock. “The Rock, his way is perfect, for all his ways are justice. A God of faithfulness and without iniquity, just and upright is he” (Deuteronomy 32:4).

Would there be any greater dismay in the entire universe than an unfaithful God who failed to keep his word?

As Joshua prepared to exit stage left, his final charge to Israel included the reminder that not one word had failed of all the good things that the Lord promised — all had come to pass (Joshua 23:14). The Psalmist gives us good soul food for our hearts to feast upon every time we step outside and look up at the vastness of the sky. “Your steadfast love, O Lord, extends to the heavens, your faithfulness to the clouds” (Psalm 36:5).

A beam of hopeful light pierces through the dark exilic clouds of Lamentations. “This I call to mind, and therefore I have hope: The steadfast love of the Lord never ceases; his mercies never come to an end; they are new every morning; great is your faithfulness” (Lamentations 3:21–23). Gladly we sing, “There is no shadow of turning with thee.” He is “the Father of lights, with whom there is no variation or shadow due to change” (James 1:17). Mightily we fight against the fear of a faithless God.

Human unbelief has no bearing on the Lord’s faithfulness. “What if some were unfaithful? Does their faithlessness nullify the faithfulness of God? By no means! Let God be true though every one were a liar, as it is written, ‘That you may be justified in your words and prevail when you are judged’” (Romans 3:3–4). There is a good reason why. “If we are faithless, he remains faithful — for he cannot deny himself” (2 Timothy 2:13).

The supremely tremendous and right declaration from the witness of Scripture is that above all things our Triune God is faithful to himself.

He Will Not Fail You Now

There is profound encouragement in knowing that our God is faithful to his own. Spiritual fortitude in the face of fear finds its source in God’s deeper commitment to himself. His faithfulness to us is the fruit of his allegiance to himself. Here is where hope in the most challenging circumstances finds fertile soil to flourish. Here is the battleground where the fear of the Lord’s faithlessness is fought tooth and nail. When I am afraid, I put my trust in you who is deeply and rightly committed to the glory of your faithful name (Psalm 56:3).

The ground of our hope is our Lord’s faithfulness to his word. He has promised us great things. Won’t he do them? Do you think he wouldn’t heed his own rules? If we are to be doers of his word and not hearers only, it rests fundamentally on the fact that God is a doer of his word. The fear of God’s faithlessness is an irrational fear. By grace, like Job, make a covenant with the eyes of your faith to keep them locked on the facts of God’s faithfulness.

Let us, then, hold fast the confession of our hope without wavering, for he who promised is faithful (Hebrews 10:23). 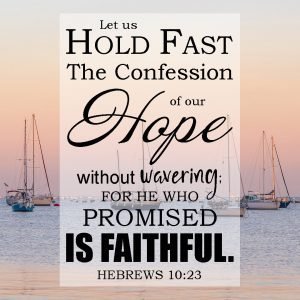