FS Sunday Sermon
The Battle Is Mine
By: Chuck Swindoll 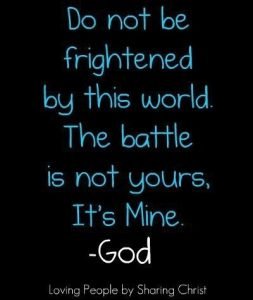 The beautiful thing about this story is that it’s a perfect example of how God operates. He magnifies HIS name when we are weak. We don’t have to be eloquent or strong or beautiful or physically fit or handsome. We don’t have to be well-traveled or brilliant or have all the answers to be blessed of God. He honors our faith. All He asks is that we trust Him, that we stand before Him in integrity and faith, and He’ll win the battle. God is just waiting for His moment, waiting for us to trust Him so He can empower us to battle our giants.

Remember, Goliath is still a giant . . . still an imposing presence. David had all the odds against him. There wasn’t a guy in the Philistine camp—or probably the Israelite camp either—who would have bet on David. But David didn’t need their backing. He needed God—none other. After picking up the stones, he approached the gigantic Philistine warrior.

The shepherd boy made the giant smile. What a joke! Just imagine! David stood before this massive creature unintimidated!

Intimidation. That’s our MAJOR battle when we face giants. When they intimidate us, we get tongue-tied. Our thoughts get confused. We forget how to pray. We focus on the odds against us. We forget whom we represent, and we stand there with our knees knocking. I wonder what God must think, when all the while He has promised us, “My power is available. There’s no one on this earth greater. You trust Me.”

Be assured, David’s eyes weren’t on the giant. Intimidation played no part in his life. What a man! His eyes were fixed on God. With invincible confidence in his God, David responded, “that all this assembly may know that the LORD does not deliver by sword or by spear; for the battle is the LORD’s” (17:47). There it is. That’s the secret of David’s life. “The battle is the LORD’s.” Are you trying to do your own battle? Trying to do things your way? Trying to outsmart the enemy, outfox him? You can’t. But God can. And He’s saying to you, “You do it My way and I’ll honor you. You do it your way and you’re doomed to fail. The battle is Mine.