Frank Amedia prophesies on youtube from Touch Heaven Canfield Church, about the coming 3rd move of Yahweh over our Nation being a “blast” at:

I love the scriptural correlation he brings forth regarding Hezekiah, 2nd Kings 18 and 19 and Yahweh’s Blast.

This is a full church service with worship. If you only want to hear the prophetic word it is around the 49 minute mark, although I did enjoy the worship, prophetic dancing and flags at the beginning. In response to the word blast in the bible, the definition in the King James Bible Dictionary is:

BL’AST, v.t. Literally, to strike. To make to wither by some pernicious influence, as too much heat or moisture, or other destructive cause; or to check growth and prevent from coming to maturity and producing fruit; to blight, as trees or plants.

1. To affect with some sudden violence, plague, calamity, or destructive influence, which destroys or causes to fail; as, to blast pride or hopes. The figurative senses of this verb are taken from the blasting of plants, and all express the idea of checking growth, preventing maturity, impairing, injuring, destroying, or disappointing of the intended effect; as, to blast credit, or reputation; to blast designs. 2. To confound, or strike with force, by a loud blast or din. 3. To split rocks by an explosion of gun powder. 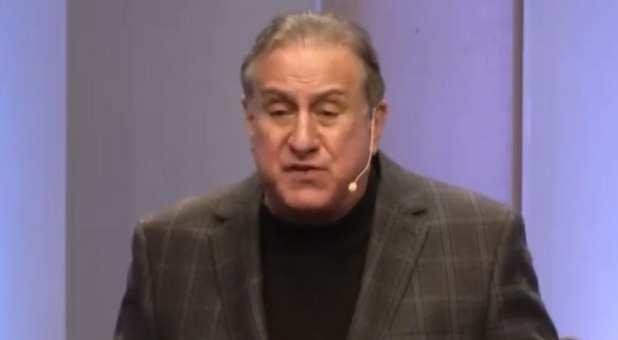 Pastor Frank Amedia is known for his bold and accurate prophetic words. In fact, he had the opportunity to share one with President Trump before the 2016 election that I share in detail in my book, God,Trump and the 2020 Election. This year, the Lord has given Frank insight into what he says are three shifts. I invited Frank onto my God, Trump and COVID-19 podcast to share his recent prophecies related to these shifts and what they mean for our country.

Frank told me, “As you and I were even uncovering the mystery of the COVID back in January and February, I had then declared there would be three shifts, and the second shift was forthcoming. And on May 24, in a Sunday service, I declared that the Lord said, ‘delusion, the spirit of delusion.’ And lawlessness was about to be released with a fury upon the earth in this nation,” Frank said. “And the very next day was the unfortunate murder of George Floyd: cities ablaze, chaos, confusion, lawlessness.

“And even before that, He said, but the third one that’s coming will be by My Spirit. And He said, ‘It will shake the earth. It will shape those who have eyes to see and ears to hear. And I’m going to intervene,'” Frank said.

But then Frank saw something on television that concerned him deeply, and the Lord spoke to him about it in a powerful way. While watching the Democratic Convention on Aug. 20, he heard Joe Biden give his prepared speech. Frank said, “In the midst of that speech, Biden looked well into the camera, and he read the words that were written for him: ‘The President keeps telling us the virus is going to disappear. He keeps waiting for a miracle. Well, I have news for him: No miracle is coming.’

Frank went on to explain that the Rabshakeh mocked and criticized both Hezekiah and the people who had trust in God. “He even said, ‘Your God is not going to be able to save you. Your God is no different than all the rest of the gods.’ And it was mockery.”

But just as in Hezekiah’s day, we have hope, Frank told me. As he was crying out over the struggles of our nation, the Lord spoke to him and said, “I am going to blast.” Frank said this is exactly the word God gave Hezekiah through the prophet Isaiah: “Be not afraid of the words that thou hast heard, wherewith the servants of the king of Assyria have blasphemed me. Behold, I will send a blast” (Isa. 37:6-7a, KJV).

To hear more from Frank Amedia about how the story of Hezekiah includes important words for us during this critical time for our nation as well as the crucial election coming in a few weeks, click here to listen to the entire podcast. It’s even more important today that you share this article and podcast with friends and family who may not understand the significance of this election not only for today but for generations to come.