Eph.5:6 Let no one deceive you with empty words, for because of these things the wrath of God comes upon the sons of disobedience. 7 Therefore do not be partakers with them.

5:6 Avoid any association with those who employ hollow words to entice you; unbelief only produces a breed of people that attract the displeasure of God. Mirror Translation

5:7 Do not allow their unbelief to include you in their company. Mirror Translation

Notice only comes on the sons of disobedience. 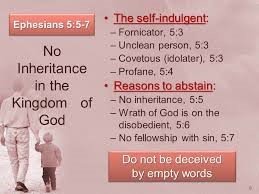 Paul warns them not to be deceived by those who would seek to say that one’s behavior has nothing to do with the quality of one’s spiritual life. You see, already in Paul’s day there were those who were merging Greek philosophy, far Eastern Mystery cults, and Christian doctrine.

The city of Colossae, not far from Ephesus, was being troubled by this mishmash which later became called Gnosticism.

a. Colossians and Ephesians were penned by Paul at the same time and sent by the same carrier
b. while Colossians deals with this heresy straight on, Ephesians only hints at it.
c. and here we see the most obvious reference to it.

There were those who were saying that since we are saved by grace, apart from works, and since the flesh is unalterably wicked while the spirit is unalterably pure, it doesn’t matter what you do in your flesh because it cannot affect your spirit. NOT TRUE.

DEFINITION of WRATH (in most references)—the personal manifestation of God’s holy, moral character in exacting just judgment/justice against sin. Wrath is neither an impersonal process nor is it irrational and fitful like anger. It is in no way vindictive or malicious. Another word in the Greek is passion.

Greek- 3709- orgé- impulse, passion- Orgē comes from the verb oragō meaning, ‘to teem, to swell’; and thus implies that it is not a sudden outburst, but rather (referring to God’s) fixed, controlled, passionate feeling against sin . . . a settled indignation (Hendriksen)” (D. E. Hiebert, at 1 Thess. 1:10).]

God’s wrath is an expression of His holy love. If God is incapable of wrath, then He is not Love, but He is LOVE.

The Bible reveals that all humankind is “by nature children of wrath/passion” (Eph. 2:3) as we have discussed, see Eph. 2:3 teaching.

We are not children of wrath, but children, sons of God.

The effects of disobedience in both OT and NT were the opposite to what the natural guilty world would expect God’s reaction to be. We would think God would, in anger and wrath, turn His back on Adam and Eve. But it was precisely the other way around. It was Adam who hid from God, not God from Adam. Here was God “walking in the garden in the cool of the day” and looking for Adam. But where was Adam? Hidden in the bushes. Nor was God displaying some wrathful retaliation, but only questioning Adam…. to bring the reality of the disobedience home to him. “Who told you, you were naked?” This was God’s judgment/justice on His disobedient children, a judgment/justice totally for their benefit. HE CLOTHED THEM.

GOD’S JUSTICE IS ALWAYS FOR OUR BENEFIT

Where then is what we would think of – and what the Bible often refers to – as God’s wrath? The answer is that the wrath (what we define as wrath) is not in His eternal person, for He is only Love.

Look at Romans 1:18: “For the wrath (Greek word orge) of God is revealed from heaven against all ungodliness and unrighteousness of men, who hold (suppress) the truth in unrighteousness.” Then verses 24, 26 and 28 tell us how God demonstrates His wrath:

Verse 24: “Wherefore God also gave them up to uncleanness through the lusts of their own hearts, to dishonour their own bodies between themselves.”
Verse 26: “For this cause God gave them up unto vile affections; for even their women did change (exchange) the natural use into (for) that which is against nature.”
Verse 28: “And even as they did not like to retain God in their knowledge, God gave them over to a reprobate (debased) mind, to do those things which are not convenient (fitting).”

So, we see that God’s wrath is just giving us up to our own sinful ways to reap what we have sown. He doesn’t punish us. He doesn’t harm us in any way. He just let’s us go the way we have chosen. Then we punish ourselves by our wrong decisions. And when we turn around, He welcomes us with open arms (parable of the prodigal son).

God has given us His Word as a guide for our life. He says that if we obey the Word, our lives will be easier and happier. If we don’t obey them, our lives will be harder and more sorrowful – – – NOT because He’s going to punish us, but because the natural result of our actions and behavior will bring us sorrow and pain.

It’s the same with God. He says, “I love you and I want your life to be happy and healthy. If you don’t obey the guidelines, I have given you, I won’t punish you, but you will punish yourselves by bringing on yourselves the results of your behavior. You will reap what you have sown.”

So, we can understand that God’s wrath is totally different from man’s wrath.

Eph. 5:8 You were there once, trapped in the same darkness, but now you are light; your life confirms that light rules. Mirror Translation 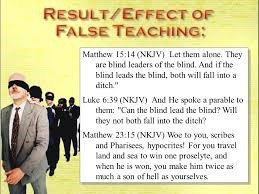 1) we were IN darkness (NLT says full of darkness)

2) fallen man isn’t just uninformed and ignorant, he can act out evil.

5) but when we are born again/ realize we are born from above, we But it is in the human race, who all have their being in Him; for always, no matter how apparently apart from Him in their way of life they be, they actually live and move in His being in Him (which was Paul’s unique revelation to the men of Athens, in Acts 17). This is because we were all created in His image and likeness from the beginning. Gen. 1:26

Eph.5:8 For you were once in darkness (ignorance, blindness), but now you are light (revelation knowledge) in the Lord. Walk as children of light

Ephesians 5:8, NLT: “For once you were full of darkness, but now you have light from the Lord. So, live as people of light!” 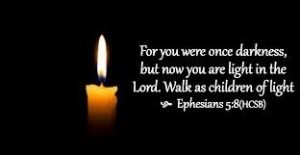 We have the very character and nature of God, the light, truth and love that mark God is in us.

Once again, we see how Paul uses the reality of who and what we are in Christ as the basis for instructing us how to live.

We will continue with Lesson 6 next week.