By Becca CardOctober 9, 2019FS Wednesday Wisdom
Do You Want to Be Blessed?
September 24, 2019
Eva Windahl 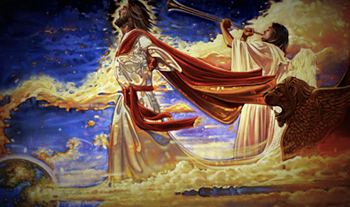 I’m sure most of us would reply:  YES! Of course! And then maybe ask in return: “How?”

Well, let me show you! The Apostle John reminds us of a special blessing when we do the following: “Blessed is the one who reads aloud the words of this prophecy and blessed are those who hear it and take to heart what is written in it, because the time is near.” (Rev 1:2-3)

The first thing that strikes me is that we are not only to just read but read out loud! I believe it is because we are to proclaim the Word of God and to speak forth the prophecies in the book of Revelation to hasten the return of Christ. Furthermore, we strengthen our faith proclaiming the Word and that is a blessing in itself!

Secondly, we are to hear the word and thirdly we are taking it to heart. All our senses are involved here: seeing, speaking, hearing, and thinking. Even emotionally taking it to heart. The question is why? The answer is because Yeshua is coming soon and we better prepare for it.

Now there are 7 blessings in the book of Revelation, and they are found in:

Seven is used 735 times (54 times in the book of Revelation alone), the number 7 is the foundation of God’s word. If we include with this count how many times ‘sevenfold’ (6) and ‘seventh’ (119) is used, our total jumps to 860 references.

Seven is the number of completeness and perfection (both physical and spiritual). It derives much of its meaning from being tied directly to God’s creation of all things. According to some Jewish traditions, the creation of Adam occurred on September 26, 3760 B.C. (or the first day of Tishri, which is the seventh month on the Hebrew calendar). The word ‘created’ is used 7 times describing God’s creative work (Genesis 1:1, 21, 27 three times; 2:3; 2:4). There are 7 days in a week and God’s Sabbath is on the 7th day.

The Bible, as a whole, was originally divided into 7 major divisions. They are 1) the Law; 2) the Prophets; 3) the Writings, or Psalms; 4) the Gospels and Acts; 5) the General Epistles; 6) the Epistles of Paul; and 7) the book of Revelation. The total number of originally inspired books was forty-nine, or 7 x 7, demonstrating the absolute perfection of the Word of God.

The following seven blessings are emphasised by Yeshua himself:

1) Blessed are the dead who die in the Lord from now on.” “Blessed indeed,” says the Spirit, “that they may rest from their labors, for their deeds follow them!”

2) Blessed is the one who stays awake, keeping his garments on, that he may not go about naked and be seen exposed!”)

3) Blessed are those who are invited to the marriage supper of the Lamb.” And he said to me, “These are the true words of God.”

4) Blessed and holy is the one who shares in the first resurrection! Over such the second death has no power, but they will be priests of God and of Christ, and they will reign with him for a thousand years.

5) Blessed is the one who keeps the words of the prophecy of this book.

6) Blessed are those who wash their robes, so that they may have the right to the tree of life and that they may enter the city by the gates.

7) Blessed is the one who says: Come! 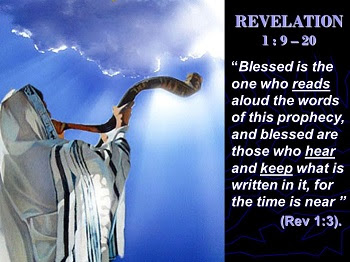 Do you want to be blessed? Read the book of Revelation and ask the Holy Spirit to bless you while reading it. Let´s get ready – He is coming soon.