Thursday, May 7, 2020 was declared a National Day of Prayer over our Nation and the outpourings from all over the US were incredible. I was
not able to watch the official proceedings at the White House, but through technology, I was able to find a live stream from Charisma to listen in to the prayers released over our Nation.

President Trump and Melania, along with Vice President Pence and his wife Karen prayed and then, the President called up various spiritual leaders here in America to pray.

I am including the link for the video below. Note: The proceedings do not start until around the 23:50 time stamp, as they let the camera run, until VP Pence and Karen came forth. It is easy to fast forward.

I am thankful for President Trump and his administration watching and warring over our Nation. It is a delight to be able to speak and hear the Name of Jesus again at the White House and see our leaders calling on heavenly intervention for the United States and her people.

President Trump spoke strong words, as did the other spiritual leaders over our Nation, however I want to call your attention to Pastor Paula White Cain and her prophetic prayer. Pastor Paula is a Pentecostal preacher, a popular Christian Author, a former Pastor of a Florida Mega Church and longtime adviser to President Donald Trump. She has been tapped to head the White House’s Faith and Opportunity Initiative, a successor to previous administrations’ faith-based office that coordinates outreach to religious communities.

Take heed to the “words” she spoke over our Nation. They were not “her” words, but the Words of the LORD, which she released into the atmosphere reminding Him of what He said. She declared/proclaimed and prophesied over our Nation and our Leaders – victory, healing, and a future.

It was also good to “see” she was properly dressed, spoke the “word” she received in a manner respectful of the position she holds as a member of the Administration and as a Pastor/Prophet of God.

The President called her up to speak around the 45:34 time stamp. I included a link with the written transcript of ALL the prayers and if you want to watch the service, there us also a video link available below. I pulled Paula’s declaration out of the transcript and placed it first for you. 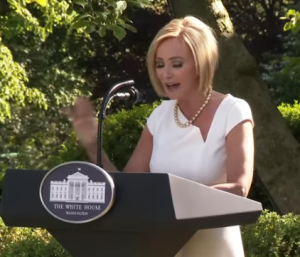 Blessings and Breakthrough over the United States of America, in the Name of Yahshua

Let our Nation be filled with the Glory of Yahweh

PASTOR WHITE: What an honor to be here with you, President and First Lady, Vice President, Second Lady. It’s a beautiful day to lift up our Lord and Savior. He is a certain God in uncertain times. And the Bible says, if two or three of us agree as touching anything, it will be done.

Job 22, verse 28 says: If you decree a thing and declare a thing, it will be established. So, God, we come in agreement with your word and with your name — the name of Jesus.

For Psalm 71:2 says: In your righteousness, deliver us and rescue us, incline your ear and save us.

Psalm 107 says: You deliver us out of the stress and out of destruction.
Your word will not return void, according to Isaiah chapter 55, verse 11. So I declare your word. I declare divine intervention and supernatural turnaround. You will restore this land.

According to Psalm 118:25: Save our nation, oh Lord, and send prosperity now.

For Deuteronomy 28:8 says: Command your blessing upon this land.

You said in Deuteronomy 8:9 to bring us into good land without any lack.

For your word declares in Psalm 33:2: Blessed is the nation whose God is Lord.

So I declare you right now to be Lord over this nation, over the United States of America, and we receive your blessing over any plague, over any economic distress.

You will stay the hand of the enemy, according to Second Samuel chapter 21, verse 16:

When 70,000 men died by a plague, David cried out as he covered himself in prayer. And the Lord answered and said, “It is enough.”

Stay now thine hand. Lord, let that be the cry today, and let that be your answer. Lord, enough coronavirus, enough to death, enough to fear, enough to poverty. Stay thine your hand.

We pray over President Trump and First Lady, Vice President and Second Lady, and this administration. I declare Psalm 89, verse 21: Let your hand establish President Trump, and let your arm strengthen him.

I declare Psalm 98:1 that your right hand and your holy arm will give Him victory. We declare victory in the name of Jesus.

And you said in Psalm 78:72 that you would guide him by the skillfulness of your hand.

You declared in Psalm 43 that send out your light and truth and let him lead his household, his administration, in the name of Jesus.

Now, Lord, we pray for your mercies, for they are new every single day. And every morning, your mercies are new. Your steadfast love never ceases. I declare new mercies for hospital workers, new mercies for doctors and nurses, moms and dads, pastors and clergies, CEOs and employers, for the President and Vice President.

And in conclusion, I declare Isaiah chapter 43, verse 19: I ask the Lord to do a new thing in our nation by giving waters in the wilderness and streams in the desert.

Malachi 4:2 says: Jesus, arise over the nation with healing in your wings.

And through fasting and praying, I believe this is the word for you and for this nation:

The Lord spoke to him and said: Pursue and go after them, and you shall, without fail, recover all.

Sir, the word of the Lord, I believe, for this nation and for this administration is:

You will recover all.

THE PRESIDENT: Well, thank you very much, Paula. Incredible, Paula. Thank you.