FS Sunday Sermon
Born on the Fourth of July 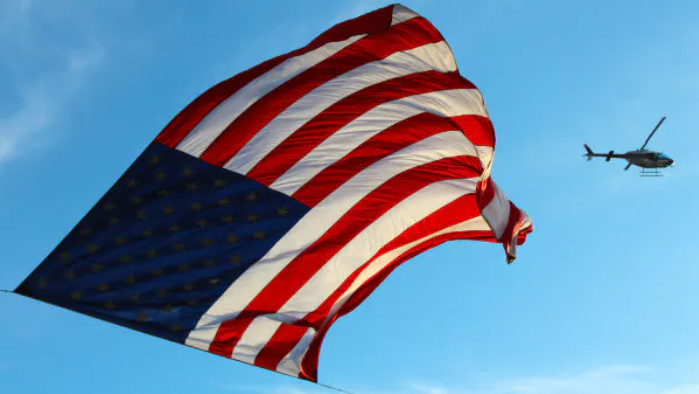 For those of us in the States, the time is here again for our midsummer’s patriotic respite.

For many, the Fourth of July means parades and picnics, hot dogs and Coca-Cola, ice cream and apple pie, baseball and bombs bursting in air. In God’s good providence, the adoption of Jefferson’s Declaration in 1776 happened during one of the best weather weeks of the year in this hemisphere. And so for 237 years now, the significance and seasonal timing of the day have conspired to make it a deeply rooted annual occasion in the American psyche.

While the Fourth’s flood of Americana is all-too-enticing for many, it can rub many others the wrong way. But before thumbing our noses or diving in deep, it’s good to pause to ask whether there’s anything that makes the day different for an American follower of Jesus. Does being born again affect how we view the Fourth of July? Here are four layers of perspective for the Christian in contemplating the Fourth specifically, and human government in general.

Where Our Fundamental Identity Lies

First, let’s be clear about where the Christian’s deepest identity lies. If we are in Christ, joined to him by faith, all other pledges of allegiance have been relativized, whatever our nation of origin or naturalization. We still have our loyalties — they may even multiply — but none goes this deep. No man can ultimately serve both God and country. In Jesus, we have one final allegiance, and thus in this world we will always be, in some real sense, pilgrims, strangers and aliens, sojourners and exiles (1 Peter 2:11).

For the Christian, our citizenship in any nation aims to be “worthy of the gospel of Christ” (Philippians 1:27), not merely worthy of that political state. At the most basic level, “our citizenship is in heaven, and from it we await a Savior, the Lord Jesus Christ,” who will do for us what no political entity in this world will ever do — “transform our lowly body to be like his glorious body, by the power that enables him even to subject all things to himself”(Philippians 3:20–21).

At the end of the day, we are sons of God, not sons of Uncle Sam. The kings of the earth tax others, not their own sons (Matthew 17:25–26). Let your annual submission to the IRS be a friendly reminder that our fundamental identity is in God, not country.

Which means that as we Americans sing the anthem together and pledge allegiance side by side, and enjoy the parades and fireworks shoulder to shoulder, we create and strengthen ties that only go so far. The blood of Jesus runs deeper than the blood that flows in defining or defending any nation. Our fellows in political liberty are important, but not as significant as our fellows in Jesus from every tribe and tongue. Yes, we seek to do good to our fellow Americans, but especially to those who are of the worldwide household of faith (Galatians 6:10).

Embracing God’s Goodness in the Fatherland

Second, though our embrace of fatherland is relativized by our embrace of Jesus and his Father, it is good and healthy to have real affection for the nation we call our own. It is right for the Christian to be patriotic and reserve a special kind of love for city and country. In fact, it’s a sign that something may be amiss spiritually if the Christian doesn’t have some tempered but tangible sense of belonging to his fatherland. It’s not only okay for American Christians to enjoy being American on the Fourth; it’s commended.

God means for us to be appropriately enmeshed in this world (as Jesus prays in John 17, not of the world, but sent into it). Christ and country aren’t irreconcilable. In Jesus’s perfect arithmetic, there is space not only to render God our everything, but render to Caesar his share as well (Matthew 22:21–22).

Christians render respect to whom respect is owed, and honor to whom honor is owed (Romans 13:7). We acknowledge God’s common goodness when our nation is manifestly “God’s servant for your good” (Romans 13:4) and the authorities are “ministers of God” (Romans 13:6). “Honor everyone. Love the brotherhood. Fear God. Honor the emperor” (1 Peter 2:17).

Genuine Gratitude for the Goodness

Third, it follows that as God’s common goodness is manifested in our political state, we should be genuinely grateful. We give thanks when thanks is owed.
Perhaps we balk at being “proud to be an American” — and would prefer to be “humbled” by it. That’s wise and good. And we need not make any such alteration to the call to be thankful.

Given the fallen condition of our world because of human sin, we should be amazed how much common goodness God continues to create and uphold in nations good and even bad. In the same breath Paul instructs Christians to be good citizens — “to be submissive to rulers and authorities, to be obedient, to be ready for every good work, to speak evil of no one, to avoid quarreling, to be gentle, and to show perfect courtesy toward all people” (Titus 3:1–2) — he also reminds us about our native condition:

For we ourselves were once foolish, disobedient, led astray, slaves to various passions and pleasures, passing our days in malice and envy, hated by others and hating one another. But when the goodness and loving kindness of God our Savior appeared, he saved us, not because of works done by us in righteousness, but according to his own mercy . . . . (Titus 3:3–5)

Given our depravity, and the diabolical desires that have a foothold in humanity for now, it is extraordinary mercy not only that any are saved at all, but also that any of our nations aren’t in worse shape than they are. We betray the far-reaching effects of God’s kindness when we’re so consumed with frustrations about our homeland that we can’t see many good things to be grateful for.

Taking Others to the True Country

Finally, for now, it continues to be legal to speak the gospel in public in these united states, and even to press for repentance and faith. This is a glorious liberty. Let’s make the most of it while we can, remembering that we Christians have a true country, which will satisfy our inconsolable longing like no nation in the present can. And let’s double our joy by bringing as many others with us as we can. It’s hard to say it any better than C.S. Lewis:

If I find in myself a desire which no experience in this world can satisfy, the most probable explanation is that I was made for another world. If none of my earthly pleasures satisfy it, that does not prove that the universe is a fraud. Probably earthly pleasures were never meant to satisfy it, but only to arouse it, to suggest the real thing. If that is so, I must take care, on the one hand, never to despise, or to be unthankful for, these earthly blessings, and on the other, never to mistake them for the something else of which they are only a kind of copy, or echo, or mirage.

I must keep alive in myself the desire for my true country, which I shall not find till after death; I must never let it get snowed under or turned aside; I must make it the main object of life to press on to that country and to help others to do the same. (Mere Christianity)

If such a perspective would fly as the star-spangled banner over our Independence Day celebrations with family and friends, we might find them richer than ever.

Let’s be profoundly grateful for the freedom we have in this country to recruit for the true one, and let’s be unashamed to seize upon our fellow Americans’ desire for life, liberty, and the pursuit of happiness, and show them in whom such joy is truly found.