By Becca CardJanuary 11, 2020Equipping the Saints, MARY SUE DAVIS – ARTICLES
LESSON 5-Ephesians
Chapter 4
BEING THE CHURCH OF CHRIST
Ephesians 4:1-32
Eph. 4:8 Therefore (For this reason) He says: “When He ascended on high, He led captivity captive, and gave gifts to men.”
4:8 Scripture confirms that He led us as trophies in His triumphant procession on high; He repossessed His gift (likeness) in man. Mirror Translation

Taken from-Psalm 68:18 You have ascended on high; you have led captivity captive; You have received gifts among men, Even from the rebellious, That the Lord God might dwell there.
Colossians 2:15 Having disarmed principalities and powers, He made a public spectacle of them, triumphing over them in it.
Eph.4:9 Now this, “He ascended”—what does it mean but that He also first descended into the lower parts of the earth?
4:9 The fact that He ascended confirms His victorious descent into the deepest pits of human despair. Mirror Translation
Eph. 4:10 He who descended is also the One who ascended far above all the heavens, that He might fill all things.)
4:10 He now occupies the ultimate rank of authority from the lowest regions, where He stooped down to rescue us, to the highest authority in the heavens, having executed His mission to the full. Mirror Translation 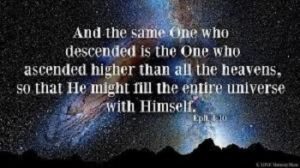 “He led captivity captive” – aorist active indicative of AICHMALWTEUW-This verb means either “to take captives in battle” or “to lead a triumphal procession of one’s own soldiers along with their captives.”

The consensus of the commentators which I studied is that this phrase is a reference to Christ leading the believers who had previously died, that is, they died prior to his ascension. This would include all Old Testament believers and those saved during Christ’s lifetime. They have been residing in Paradise (also called “Abraham’s bosom”) until the Ascension of Christ. They are called captives because they do not have a resurrection body yet. They will not have a resurrection body until the second coming of Christ, 1 Cor. 15:51-54.

Christ’s body was in the grave, His spirit was in the presence of the Father, and then descended to a region called Hades (Greek) or Sheol, (Hebrew). Some say soul descended.

Prior to the Resurrection of Christ, no human beings were in heaven; all believers checked in to Paradise in the heart of the earth. Reference: Luke 16:19

There is also a place called Tartarus which is a residence for certain of the fallen angels (demons) who were involved in the events chronicled in Genesis 6. They are locked up there until the Judgment of the Great White Throne.

Jesus Christ was not in Hell, He was in Hades. At that time, Hades has two divisions, Paradise for the believer, and Torments for the unbeliever. Hell, and the lake of fire and brimstone, is reserved for the future. Rev.20:14 He led captivity captive and led them out.

The ministry gifts, which were given by the Lord Jesus Christ, include those mentioned here, that of apostle, prophet, evangelist, pastor and teacher, the five- fold ministry. As a conqueror distributes in token of his triumph the spoils of the foes as gifts among his people. The impartation of ministry gifts (graces) depended upon Christ’s ascension. Christ as Lord of all first took possession of the earth, the unseen spiritual world, then heaven.
Acts 2:27-28 For You will not leave my soul in Hades, Nor will You allow Your Holy One to see corruption. 28 You have made known to me the ways of life; You will make me full of joy in Your presence.’

Romans 10:7 or, “Who will descend into the abyss?’ ” (that is, to bring Christ up from the dead).
Revelation 1:18 “I am He who lives, and was dead, and behold, I am alive forevermore. Amen. And I have the keys of Hades and of Death.
Spiritual Gifts
I. Introduction and Definition.
A. God has a purpose in life for each and every believer.
1. Life-long purpose (Jer. 1:5; Ps. 139:16; Matt. 6:27).
2. Short-term purposes (Acts 16:6 Paul is forbidden to go to Asia, Acts 18:19-21; 19:1-41 where Paul bears some of his greatest fruit in Asia).
B. To facilitate the believer’s fulfillment of that purpose, God has provided spiritual gifts.
1. During this present dispensation, the distribution of spiritual gifts is universal. Every Church Age believer motivational gifts- (Rom. 12:3,6)- ministry gifts (Eph. 4:7; 1 Pet. 4:10), gifts or manifestations of the Spirit (1 Cor. 12).
2. During previous dispensations, each and every believer had a purpose in life, or a work-assignment, but the giving of spiritual gifts was not universal. The Spirit of God would come upon a person for a specific time or reason, and then depart just as suddenly (Judg. 3:10; 6:34; 11:29; 14:6,19; 15:14; Num. 11:17-30).
3. Spiritual gifts (charisma) are given entirely by grace (charis), and the assignment of one gift versus another gift are not reflections of individual human merit or demerit.

b. Paul gives more detailed distinctions of gifts. Eph. 4:11-13 should be taken in context with what Paul has already written in Romans 12 and 1st Corinthians. In Eph. 4 and 1 Pet.4. Paul is describing what are often referred to as the leadership gifts: Apostle, Prophet, Evangelist, and Pastor- Teacher. I prefer to think of them as the equipping gifts, because they are designed for the equipping of the saints for the work of service (Eph. 4:12).

5. The purpose for spiritual gifts.
a. For the common good (of the entire body of Christ) (1 Cor. 1:7).
b. For the equipping of the saints for the work of service, and for the building up of the body of Christ (Eph. 4:12).
c. For serving one another (1 Pet. 4:10).
6. Who gives these spiritual gifts? The Holy Spirit is referred to as the giver of these gifts (1 Cor. 12:11). The Lord Jesus Christ is referred to as the giver of the “5- fold ministry/leadership gifts” (Eph. 4:11).  The Father is referred to as the giver of the motivational gifts in Romans 12:6-8. These are delegated responsibilities, of course, because ultimately everything is given by the Father (James 1:17).
James 1:17   Every good gift and every perfect gift is from above, and comes down from the Father of lights, with whom there is no variation or shadow of turning.
We will continue with Lesson 5 next week.
The blessings of the Lord are upon you whether by blood, adoption/sonship or assignment. The blessing of the LORD makes a person rich, and he adds no sorrow with it. Prov. 10:22